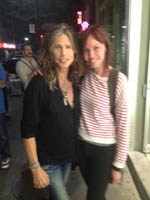 My Sober Life in Montreal Day 4: A late night encounter with Steven Tyler

I had it all planned out. I was going to tell you about the little magical run-ins I’ve been having, like this old man singing the blues wearing a fedora and high top chucks. But then late last night, Steven Tyler jumped in my path.

Being a Monday night, Saint-Laurent was still and quiet. From a distance, I saw a skinny man jumping in and out of doorways, like a leap frog or a hyper eight year old boy. This nimble figure appeared to be window shopping; energetically pressing his face against storefronts. I squinted and thought, “Wait…is that Steven Tyler?” It was.

The street was empty and he swiftly approached with a sort of limber zig-zag. Stone cold sober (obv), I stood there dumbstruck with an awkward smile. There was one other dude out for a stroll who also noticed the Aerosmith legend, and was practically shaking with excitement.

“Hi!!” said Steven.
“Will you take our photo?” The guy said.
“Sure.” I whipped out my iPhone and told them to pose.
Steven then looked at me, “Where are you from, girl?”
“Toronto.”
“I knew it.”
Now, truth be told, on the streets of Montreal…this is usually a bad thing. If you’re outed as a Torontonian it means that you might look a little more stiff. Whatever. I had been working at Second Cup and with zero makeup and an oversized knapsack heavy with my laptop, I wasn’t exactly Montreal chic.
“How did you know that?” I asked him.
“I just did. You wanna take a photo? Let’s take a picture!”
“Okay.”
He gave me his big lip smile and then skipped off into the night. I have never witnessed a man that age with so much elasticity in his step.

Now, had I been drinking, this little exchange would have not ended here. My liquid courage would have prompted me to suggest taking Steven to a cooI secret bar, off the beaten track. If he obliged, I would have. And then I would have ordered shots, and probably offered to pay…even though he is the mutli-millionaire.

I know this sounds ridiculous, but shit like this did used to happen. I have jumped into a moving SUV to meet P. Diddy, I chased Drew Barrymore up Ossington. I even spent an hour drinking stiff martinis with Geoffrey Rush and didn’t even know it. During TIFF, I was drinking alone at Salvador Darling, killing time before my next party. Rush bought me a drink and we spent an hour conversing nonsense about love and marriage. Cross-eyed drunk, I didn’t realise who he was until I woke up the next morning and pieced the night together. Did you know Rush is one of the few people on earth who has achieved the Triple Crown of Acting? An Academy Award, Golden Globe and Screen Actors Guild award? “You famous?” I slurred.

That’s how our chat began. Just writing about it makes me cringe.

Without a doubt, last night’s story would be far more entertaining had I followed Tyler. But I went home, did the dishes, threw in a load of laundry and hit the sack. For me, it’s better this way.

Now back to the bluesman busker. He is pretty rad. I’m fairly sure that Steven Tyler and Geoffrey Rush would agree.

On day 1, Jen outed herself as a recovering alcoholic. On day 2, she wondered why the hell she did that. On day 3, she compares the dark days of 1999 with vibrant life in 2012.