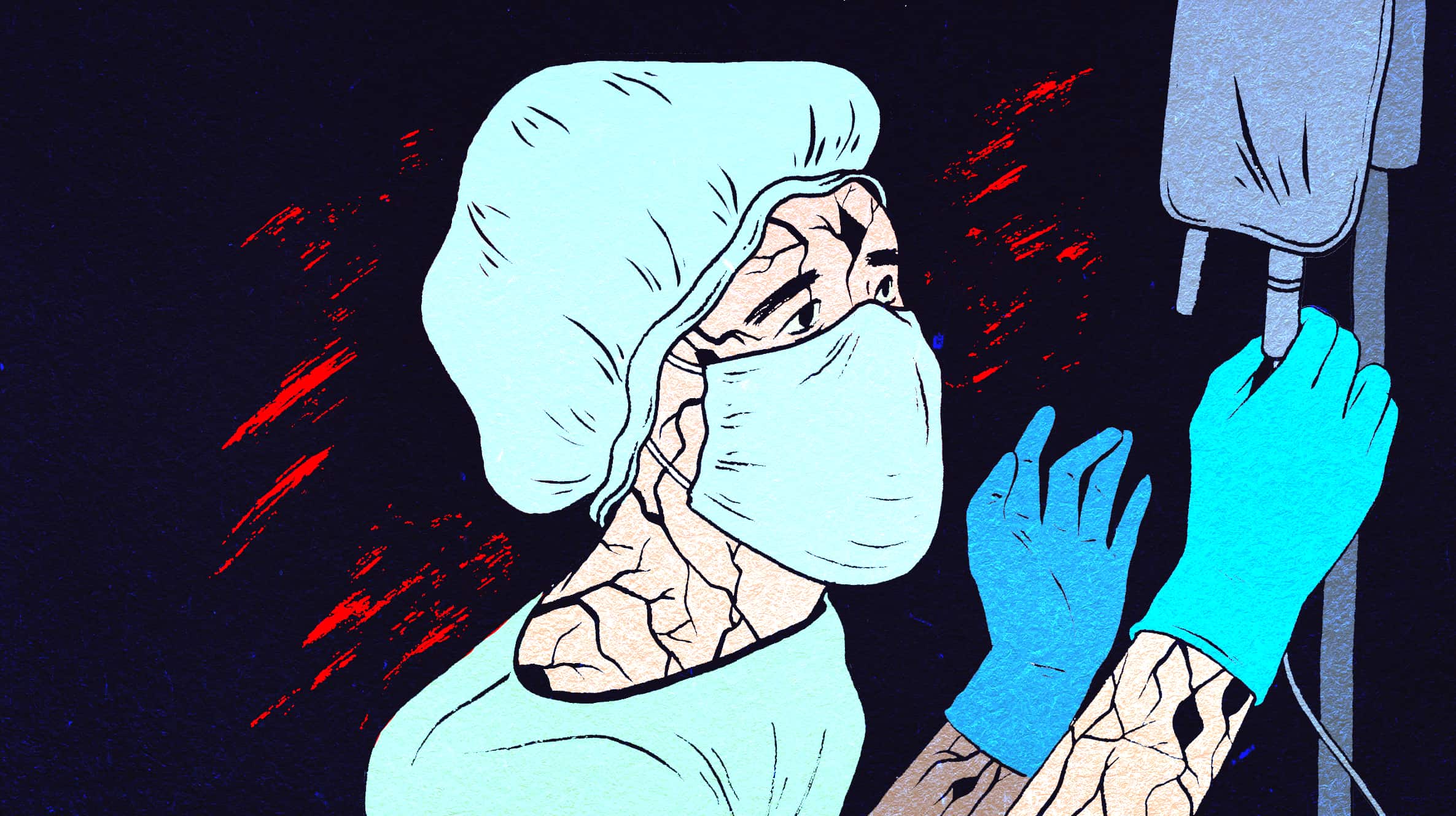 "I've heard colleagues say they feel like they're dead inside when they're at work."
Life Stories

Since March 2020, nurses have been on the frontlines of this pandemic—overworked, undervalued, and underpaid. COVID-19 has exacerbated what was already a stressful situation. Burnout doesn’t capture the trauma they’ve experienced, and now poor working conditions are driving many to exit the industry altogether.

For the second interview in our five-part series on the state of Ontario hospitals right now, as told by nurses who work in the ICU and emergency departments, we spoke to Carrie Donaldson*. Carrie has been working as a nurse for a year, and since last June has worked in an emergency department in a Durham Region hospital. Carrie shares what nursing is like both for a new nurse like herself and her more experienced colleagues.

I remember going through nursing school and romanticizing everything. But nursing has not been what I was expecting. It’s so much harder than school ever prepared you for. I can’t say what it was like pre-pandemic, but I think the reason why it’s so hard is this staffing crisis that we’re going through as a result of the pandemic.

I work with a lot of really great nurses, and everyone since day one has been helpful, but I find it’s more the newbies are helping the newbies. We’ve hired so many new people since I started and up until probably November there were still new faces coming in. Within the first 10 shifts, I was orienting somebody that was new to the department because there weren’t any more experienced nurses that were available to do that. It’s a little bit like the blind leading the blind when you’re that new and then you’re expected to teach somebody else who’s just come on.

Working in the emergency department is overwhelming and panic-inducing at times. I started full-time in June and within three months I begged my manager to allow me to drop down to part-time. In my off time I was constantly filled with this sense of dread and panic about going into work because we are so short-staffed and it’s so busy.

With COVID there’s so many people coming in with your regular cold and flu symptoms, which is not in itself challenging, but it’s the volume of people coming into the ER, and you can’t close the doors. So we’ll have patients waiting up to 10 or 11 hours from when they arrive till they’re actually seen by a doctor. And in a lot of cases, people are having to wait with no food or water because for one thing you have to wear a mask, for another thing, if you come in with any kind of abdominal pain, we can’t allow you to eat or drink until you’ve had diagnostic work done. You can imagine tempers are running pretty thin among the patients who are waiting to be seen, so it’s a lot of managing people’s expectations.

At times it feels like it’s dangerous because nurses have so much responsibility. They’re operating under a licence and if something goes wrong it comes down to that individual nurse, regardless of what the circumstances were—whether we were short-staffed, or they didn’t have a break in 12 hours. If something happens my understanding is the hospital’s not going to take responsibility, it’s on the nurse. So that’s always at the back of your mind, and you hear nurses saying “this is my licence on the line.”

I asked a friend who’s been working in the emergency department for 14 years about how many staff we have lost. She told me that by June 2021, our department had 40 nurses who had left or changed status to part-time casual status. None of the retirees since the beginning of the pandemic have come back, whereas typically you would see retiring nurses come back on a casual basis for something to do, to get some money. Because sometimes these nurses are retiring at 55; they still have a lot of years left in them if they wanted to work. And then by mid-November, we were losing one nursing staff member every single week. We’re also onto our third manager since I started, so there’s not much continuity there in terms of leadership. And the consensus in the break room is everyone’s morale is so, so low. I’ve heard colleagues say they feel like they’re dead inside when they’re at work.

I got into this job because I care about people and I want to help them, so I still always approach each patient and give them the care that I would want a family member to receive. But I just try to keep it in my mind that I will just do what I can.

Sometimes you get a bit overwhelmed because you’re tired or just overworked. I would say maybe one in 10 shifts I get all my breaks. The night shifts tend to be the worst. We will be more short-staffed on a night shift and I’ve worked night shifts where I don’t get any break at all in 12 hours, which is so not healthy.

I am just coming up to 12 weeks pregnant, and about four weeks ago was the last time that I’d worked a night and didn’t get my break at all. And the next day I ended up in my own emergency room with a hemorrhage. I don’t know if it’s related, but it’s strange timing. Everything worked out OK as far as the baby and the pregnancy, but from there my family doctor wanted to put me on modified duties. It took close to four weeks for me to find out that my manager declined putting me on modified.

I shouldn’t complain, but 12 hours is such a long time. Trying to stay upbeat and positive and polite and professional, when you know that maybe you’re not getting a break, and then on top of that, they’ll ask, can you stay an extra four? Which I never do. The max we’re allowed to work is 16 hours. And on Friday when we were so short, a couple nurses did stay. So they worked from seven in the morning until 11 at night, which I just think is dangerous. You can’t be doing your best work when you’ve been there that long.

But I have to say, all of my colleagues are amazing women and men, and despite everything else going on, they always give the utmost care to the patients.It’s a predominantly female profession and we just keep rolling with it, just keep providing the care. But I follow this pretty large Facebook group made up of Ontario nurses who want change, and it just seems like there’s nobody listening. Some nurses on that page are really involved politically and they’re the ones organizing protests, but it just falls on deaf ears.

It’s just the nature of public service workers. The public has the perception that our jobs are not that hard, that we’re well compensated. And there’s this idea with frontline workers that there are people behind us to take our place, but there is nobody else to take our place. So when you or your family member gets sick and needs to come to the hospital and the department is eight short in terms of nurses, which is the highest I’ve seen, you’re not going to get the care that you need. You’re going to wait for 11 hours or there’s not going to be a bed for you.

This interview has been edited and condensed for length and clarity.

"I've heard colleagues say they feel like they're dead inside when they're at work."