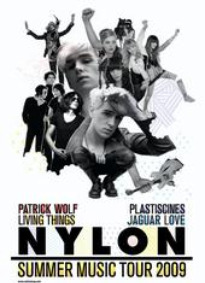 I hit up the Nylon Summer Music Tour June 17 in what was the first of sure to be many summer music festivals for myself. Still on a high from the previous night’s Passion Pit show, I was totally ready for another late night of good music and boy, did I get my money’s worth on this one.

The night started off a little iffy, with me being one of the only a handful of people drinking among a crowd of 16-17 year-olds trying to wipe off the black x’s on their hands, but fortunately, the music managed to exceed my expectations.

First on stage were the duo (and former members of Blood Brothers) who call themselves
Jaguar Love . Though I wasn’t really into them, they had great energy and saw no problem with joining the crowd below for a few songs. The kids sure loved them for that.

Next up were Plastiscines , a girl group from Paris who seemed quite thrilled they could speak in their native tongue and have at least some of the audience understand. Their broken English was incredibly cute, especially when they sang “I’m a Bitch.” I couldn’t help but notice Patrick Wolf lurking their performance the entire time from a balcony with none other than Toronto’s own Owen Pallet (Final Fantasy).

Living Things took the stage next, playing up the skinny-goth look with plenty of rock ‘n’ roll swagger, and a lead singer reminiscent of a young Mick Jagger—hand gestures and all.

Finally, Patrick Wolf emerged on stage in one of his bizarre-yet-magnificent costumes. After a few songs and continuous, angry hand gestures to the sound crew, Mr. Wolf did an impromptu walk-off. Some audience members were quick to leave during the 15-minute wait (I guess that’s to be expected at an all-ages show when kids have school the next day) and some were mortified that he would do such a thing. “I’m going home and removing ALL his music from my computer,” I overhead one girl saying. I personally wasn’t too bent out of shape about the incident—the guy’s been on tour for a while now and was probably exhausted.

After a flustered stagehand apologized to the audience, Patrick returned to the stage wearing nothing but a thong—his ass displayed proudly for all to see—criticizing the sound at the Mod Club. Obviously, cameras went into a frenzy.

“I’d better see these pictures on the internet tomorrow,” he said from the stage, “Give Perez Hilton something to wank at.”

The set ended amazingly, with Patrick coming into the audience to sing “Vulture” and “Battle” in a crazy vulture costume, still exposing his buttocks. I was behind him the entire time—vulture wings continually hitting my face, accidentally touching his ass, and having him step on my foot several times. Obviously, I didn’t care, and will get to relive it through several YouTube videos that have since been uploaded.

Needless to say, I left the show in a tizzy wondering what the hell had just happened.