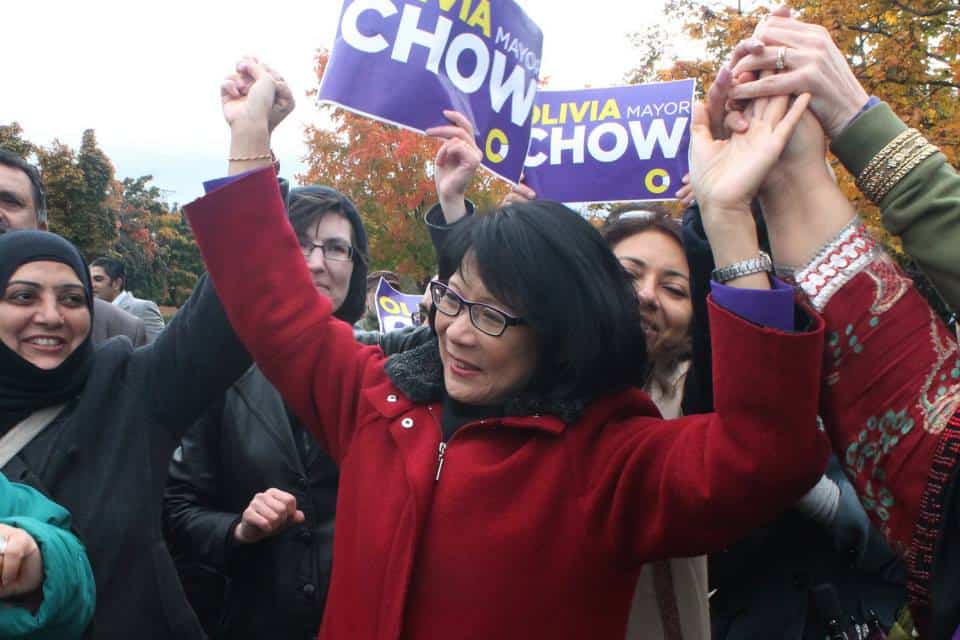 "Our culture is not the truth. It is thousands of years of inherited wisdom about how you should be, and a lot of it is bullshit."
Events & Culture

On Olivia Chow, Female Leadership, and a Sexist Culture

"Our culture is not the truth. It is thousands of years of inherited wisdom about how you should be, and a lot of it is bullshit."

I recently read a news story by Sarah Neville about Toronto mayoral candidate Olivia Chow. Neville noted that Chow was criticized by peers, enemies, the media, male and female colleagues alike, for not being a great communicator. The article went on to cite research stating that women, visible minorities, and the elderly are all critiqued more harshly than white males in leadership roles. Women tend to be judged for their style, rather than their substance, the author noted.

Neville’s final thought in the article was what really struck me. She lamented the way society’s subtly sexist takedowns of female politicians send a deterring message to young women who might be contemplating a career in public office. Years of accumulated experience suddenly collided with that statement, and I was instantly aware of the breadth of our culture’s subtle but constant message to girls and women: “don’t, can’t, shouldn’t… aspire to your highest incarnation, to a leadership role, to a career in a male-dominated field, to being a woman in power.” This phenomenon has already been well documented, but for some reason, reading that story about Chow yesterday, it was like I was hearing it for the first time.

I am already well aware of the media’s sinister role in perpetuating negative female stereotypes. Jennifer Siebel Newsom’s 2011 documentary Miss Representation lays bare the constant objectification and sexualization of women and girls in television, film, and news media. And I have personally encountered countless sexist tropes in my career as an actor.

Still, it was Neville’s story about Chow that made me wonder whether the most dangerous hurdle to women’s advancement was not the obvious and blatant sexism—i.e. the “women are terrible drivers,” / “she was asking for it,” varietal—but this more subtle form of discrimination, whereby a soft and condemning voice, (maybe the voice even seems neutral) judges women negatively for not being “warm” enough, or deems them “cold” for showing too much ambition and determination, all while rewarding traits like docility, conformity to a narrow standard of beauty, and sexual attractiveness (though not sluttiness, of course, because we all know that sluts are a Bad Thing and not Serious Women).

So if I could send a message to the ladies of Toronto who are watching this coverage and thinking how awful it is to be a woman in politics, or a woman with ambition, I would remind them that our culture is not the truth. It is thousands of years of inherited wisdom about how you should be, and a lot of it is bullshit.

Real life is not dictated by pundits, or fashion magazines, or what you overhear someone comment as they pass you on the street. Real life, this existence we all share, is actually just an accumulation of moments, and moments are neutral. Real life is you just being you—it is devoid of commercials and billboards and columnists telling you how it really is. Cultural messages may be stuck inside your head, but they are not you. When you have a big dream, and that voice pops up saying “What will people think” / “I could never” / “This is going to fail,” remember that the negative voice is just background fuzz; it’s feedback from the speaker of our demented culture. And it’s a lie. Turn down the volume and put on some Stevie Nicks. The world needs your contribution.

#VanGoghTO: Massive Immersive Exhibit Will Take Over Abandoned Five-Storey Warehouse Starting May 1st (Psst: We have a pre-sale code!)