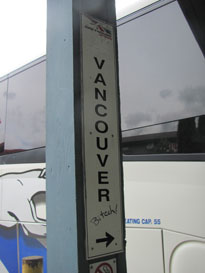 On The Road To The Sasquatch Music Festival: Hitchhiking, Sangria, Whistler, and the Defensive Properties of Rachael Ray Paring

I arrive in Vancouver after 24 hours of bussing up the Pacific Northwest. I get in around dinnertime, and SDTC Vancouver writer Vanessa meets me at the bus station. We head back to her place in Mount Pleasant for showers and to collect her roommate Marta, then head to Main St. We go to The Foundation, where the grinning waiters trip around the funky space clutching giant trays of nachos in their tattooed arms and taking your order from behind thick black frames. Revolutionary sayings line the walls, and we sit down on mismatched chairs, served water in jamjar glasses. Over a pitcher of delicious sangria and a platter of the nacho special-with bell peppers and basil added to the usual fixins, and generous piles of sour cream, sweet salsa, and guac, the girls tell me about hitchhiking up to Squamish, weilding Marta’s Rachael Ray paring knife to defend themselves (and cut up their pack-lunch sandwiches.) Riding in a toilet truck, she rummaged in her bag to show off her weapon. “Seriously, honey, I would have killed you by now,” their driver grinned.

After dinner, we head to The Whip for craft beers, whiskey sours, and chocolate ganache. As the punk dodgeball team clears out, my friend Justin arrives fresh from his shift at Kitsilano Wine Cellar, with bottles in hand. We walk in the light rain back to Vanessa’s to crack open a bottle, and stay up ’til 4 in the morning slugging back white and rambling loudly.

Vanessa and Marta at The Foundation on Main

At 8 am, I have to be on a bus up to Whistler. God knows how I made it, but I found myself sleeping on the Sea to Sky highway, on my way up to the mountains. When I get there, I meet my friend Alix in the village, to catch up over coffee and grilled vegetable sandwiches. We poke around the village shops and she tells me about living above a bakery in Pemberton, where everyone knows everyone and it’s pretty easy to see a bear. That afternoon, I head back into the city, and finish my wardrobe-replenishing with a stop into Kiehl’s and Diane’s Lingerie on South Granville, where the lovely Russian women helping me smiles at my bra choice. “I like this one – it’s good, it’s sexy.”

After a nap I bus to Kitsilano for homemade ratatouille, garlic bread, and red wine in the well-appointed apartment of my friend Megan and her fiance Foster. I play with their new puppy Lucy, who looks like a cross between a dalmation and a coyote, score some excellent cast-offs from a pile of Megan’s clothes destined for consignment, and hear tales of Megan’s week recording her album. After dinner, I walk home in the rain to start packing my stuff to leave tomorrow for SASQUATCH!

The Sea to Sky highway

Read More of Haley’s West Coast Adventures: On The Road to the Sasquatch Music Festival: 100 million Greyhound Buses, Doing It Caveman-style, Love of the Luggageless

10 bands we can’t wait to see at this year’s Sasquatch! Music Festival