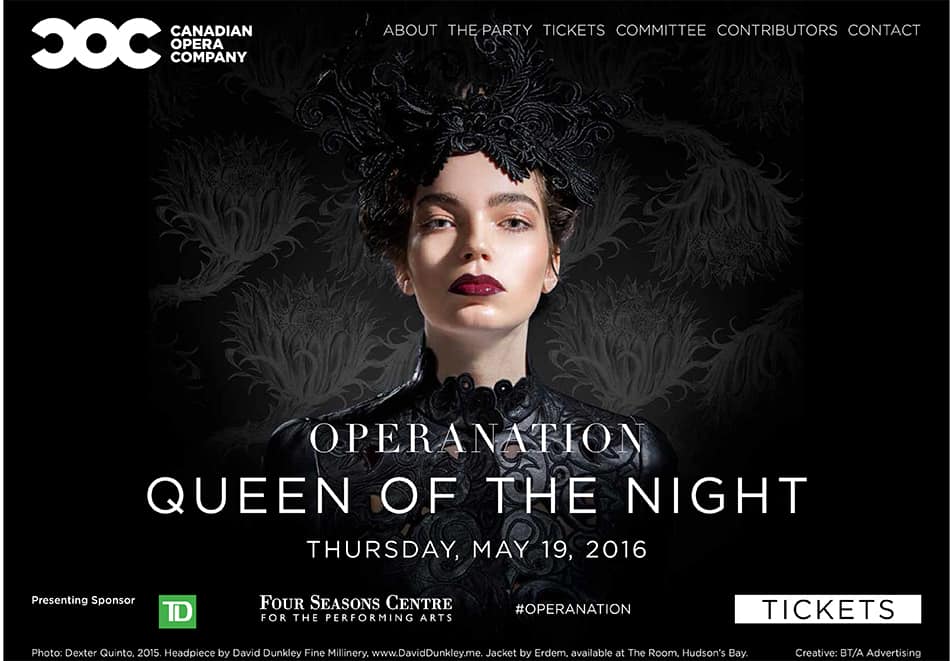 On May 19th, Operanation: Queen of the Night will take over the Four Seasons Centre with passionate performances by Toronto’s top artistic queens. Electro-pop icon Martina Sorbara of Dragonette will perform alongside Canadian Opera Company’s Ambur Braid; beloved drag queen Judy Virago will invite guests to grab the mic for some live karaoke; we will all be channelling our inner Aria. Can we get a YASSS, K-W-E-E-N?!

The COC’s annual fundraiser is known for bringing together Canada’s most celebrated musicians and bands (Broken Social Scene, Austra, Rufus Wainwright) and opera singers for unforgettable performances. This year, the fancy fête also boasts a range of artistic installations and performances, including Queen of the Night tattoos by artist Shary Boyle and fashion designer Tanya Taylor, and a live art installation by illustrator Gillian G (sponsored by Four Seasons’ neighbour, Drake One Fifty).

In anticipation of this night (HOLY SHIT, IT’S GOING TO BE GOOD), we got on the phone with Gillian G to talk all things, well, QUEEN. “I was super excited to do this job because I grew up in an opera-singing family,” says the artist, who explained that her window painting is 70% done and will be completed during the night of the party.

Having painted windows for The Drake Hotel, Drake One Fifty & Drake Devonshire, Gillian is used to the performance aspect of painting and quite enjoys it. “It’s a unique thing to paint on a clear surface because you can see what’s happening past you,” she says. While painting her mural (which pays homage to the blooming Queen of The Night cactus plant), Gillian became part of dramatic scenes unfolding on, ahem, QUEEN Street “It happened on the day that there was a protest for $15 minimum wage. The protest marched up the street while I was painting, so I started waving. It was fun!” Sounds like the ideal storyline for a contemporary opera!

In between dancing to Dragonette, singing karaoke, and getting ink’d, be sure to watch Gillian finish her art piece. This year’s Operanation is primed to be one of the best Toronto parties of 2016.