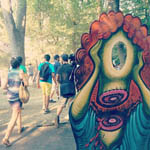 Osheaga 2012 Roundup: Our Top Ten Highlights of the Fest

THE festival of all Montreal festivals: Three days. 120,000 people. Several industrial water hoses dousing the crowd during sets. A gazillion side bras, fedoras and high-waisted short shorts. So many shirtless bros. A mind-boggling lineup of performers and epic journeys across the land to make them all in time. Sun, rain, wind, mud, beer, drugs, MUSIC. Below, our favourite moments from Osheaga 2012.

Florence Welch captivates the crowd with her magical fairy goddess stage presence
My favourite performance of the entire fest, HANDS DOWN. From the heart-bursting “Spectrum” to the rock-out “No Light, No Light,” Florence Welch and her Machine had the massive crowd totally enthralled and hanging on her every note. Like I’m pretty sure all of the light in the world shone out of her on that stage as her voice soared across the park and she flitted and pirouetted about in a floor-length navy jewel-sleeved dress. If I were forced to choose the best moments of that hour of my dreams, I’d say a) Welch telling us that if we had someone in the crowd that we liked or loved, to “raise them up” on our shoulders before breaking into “Rabbit Heart (Raise It Up), and b) the in-unison sing/clap/jump-a-long to “Dog Days Are Over.” But I really just want to choose every moment. And friend/date/be Florence Welch for the rest of my life. She was a vision. Note to the Osheaga organizers: HEADLINER, 2013.

Franz Ferdinand reminds us just how fucking cool they are
There was many a sweaty dance party on the grounds of Parc Jean-Drapeau this weekend but Franz Ferdinand really got them all started with their hypnotic, can’t-help-but-move-those-feet, guitar-rock, drug-induced, dark party anthems. The boys took us back through the 2000s with past hits like “Michael,” “Ulysses,” “No You Girls,” “This Fire” and “Take Me Out,” ended their set with a mind-blowing group drum solo and it was our university daze all over again, with lucid dreams of being a rock star’s girlfriend. Our love is officially rekindled.

Justice ends Day 1 with fireworks and basically the best dance party ever
A soaring-energy finish to the first day, Justice brought the evening to a thundering close, with its next-level sound and beats. The sun was down, the lights were up, the crowd was high on…everything and we danced and danced and daaaaaaaaaaaaanced.

A$AP Rocky tells us to “put our motherfucking hands up” 800 times and we do because we can’t not
“True pimps and trim bitches” alike crowded the Green Stage for A$AP’s set and those who stayed on the sidelines didn’t stay there for long as the pounding beats had us running to join the floor jam, so infectious was the energy. Purple balloons and foam noodles were everywhere, girls were grinding like no one was watching (everyone was watching) and SO. MUCH. CROWD-SURFING.

Garbage rides the ’90s nostalgia wave and Shirley Manson speaks perfect French
Those of us who were angsty teens in the ’90s couldn’t wait to have electronica/dance/rock/pop Garbage back in our less angsty (god, don’t we hope) lives on Saturday evening. Who didn’t want to be Shirley Manson in 1996?? Girl was working a topknot before topknots were even a thing. Also there’s that whole SHE’S A ROCKER GODDESS part. “I’m Only Happy When It Rains” was the song of the set but the best moment was when Manson, in perfect French, asked a security guard to grab a letter that a girl in the front row wanted to give her, thanked the girl and said, “Cette chanson est pour toi.” The crowd actually gave a collective, “Awwwwwwwww.”

Mad Men’s Jessica Paré makes a surprise guest appearance for two of Jesus and Mary Chain’s songs
Helping out on vocals for “Just Like Honey” and “Sometimes Always,” Mad Men star and Montreal native, Jessica Paré made a delightful cameo during the Jesus and Mary Chain set. We kinda hoped she’d break into “Zou Bisou Bisou” at some point during the half hour but alas, no dice. Which is fair, we guuueeessss, considering it was like the band’s moment or whatever, but don’t front like you weren’t all hoping it too.

Snoop Doggy Lion drops it like its hot, asks us what his name is and even though we don’t know anymore we love him anyway
Despite making us wait half an hour before gracing us with his presence like he was the second coming, the D-O-Double-G gave us a killer hip hop party to close out the Saturday night. “Gin and Juice,” “What’s My Name,” “P.I.M.P”: all the hits were there (and even some misses – “California Girls” was not okay, Snoop. Not then, not ever). He even performed his new reggae-inspired single “La La La” for the first time, from the upcoming album, Reincarnated. The bass was sexy, the weed ubiquitous and Snoop was in fine form (whatever animal that now may be).

Common makes one girl’s life (and every other one’s pale in comparison) by pulling her up on stage in front of everyone
Sampling songs like Beyoncé’s “Party” and Jay-Z and Kanye’s “Niggas in Paris,” in addition to his own songs like “Be” and “Universal Mind Control,” Chicago’s Common proved once again that he’s a rap god amongst men. Best moment (and worst): When he pulled a girl that wasn’t one of us up on stage and rapped to her/stood next to her and let his rap god presence wash over her as the thousands of jealous audience members roared/cried inside. Second best moment: his Montreal/Osheaga-themed freestyle was siiiiiiiiiiiiiiiiick.

Santigold colours our daydreams neon green, everyone dances their asses off
This was one of those wonderful moments in which you discover something you never knew about before and then wonder where it’s been all your life. Santi White, in a neon green flared mini-dress, made me feel so many feelings that I didn’t know what to do with, so I just danced the shit out of it and it was a beautiful moment the two of us shared with 8000 other people. Her M.I.A-like beats have been on my Pod ever since.

The Black Keys close the fest with their sexy garage rock, make us want to be their next girls all over again
“Howlin For You.” “Gold on the Ceiling.” Dan Auerbach. Patrick Carney. Playing musical instruments. I don’t know what else there is to say.