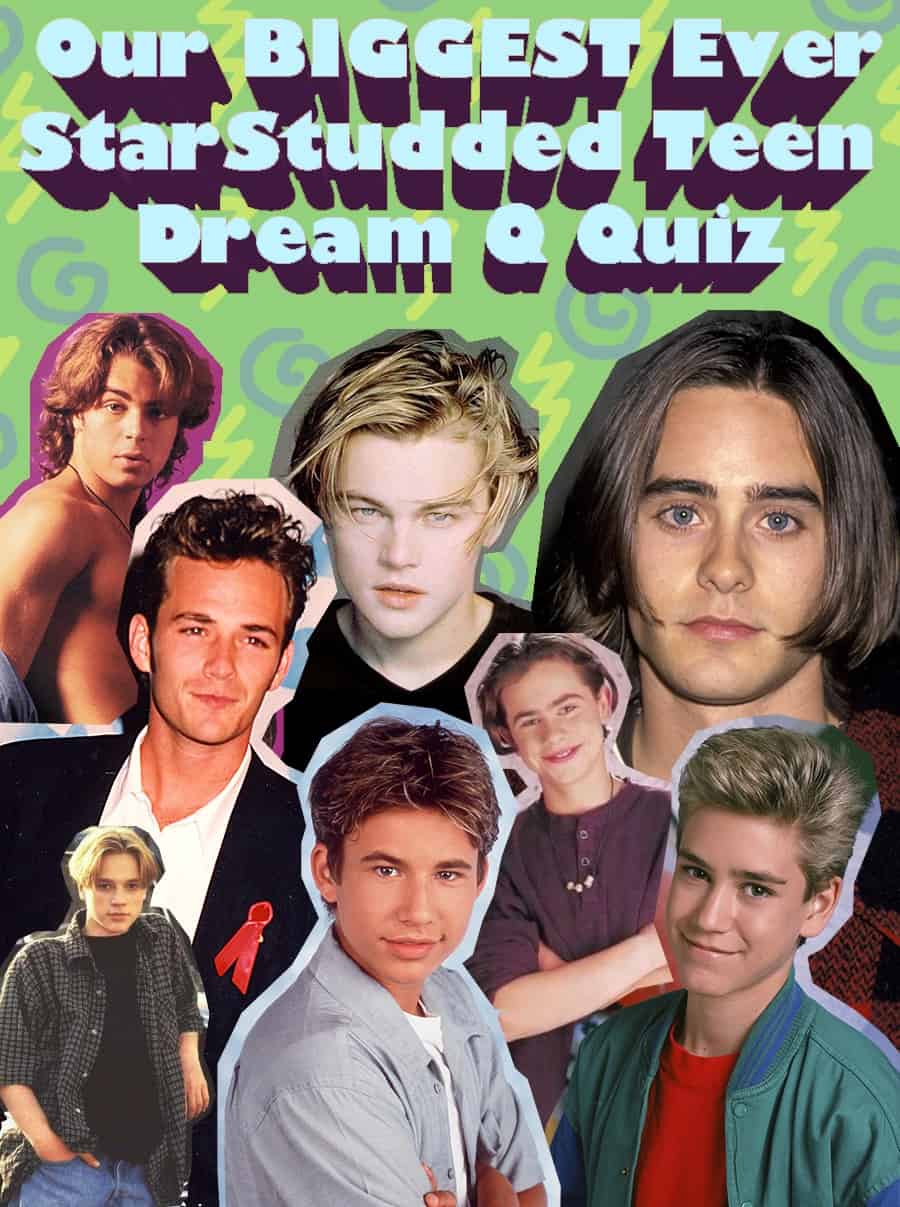 Hey readers! We’ve got the rest of your burning questions answered by all your fave hot hottie Hollywood hots!

Luke Perry: Oh, just the classics, the whole Elvis catalog and of course Frank Sinatra. Sinatra, Dean Martin, you know, the greats. Not like this rap garbage. I don’t have time for that.

Mark-Paul Gosselaar: “When I wake up in the morning/the alarm gives out a warning/I don’t think I’ll ever make it on time…”

Rider Strong: Haha sorry about that, I know I was gone a while…Ben threw me in the pool then I threw him in the pool! My favorite song? Riders on the Storm, because for a long time I thought that it was “Riders on the Strong” and it was about me. Ben says it’s because I’m dumb. Whatever, I’m totally going to give him a noogie later. Aggggh! Ben just gave me a wet willie! I’m gonna get you! (phone drops to the floor)

Jared Leto: My favorite song is this song I’ve been writing at the lake every day. It’s really cool. I think I might start a band, once I’m tired of acting. Hold on a sec, I’ll grab my guitar and play it for you…

Joey Lawrence: I’ll send over some signed copies of my CD single. Oh, you mean my favorite song to listen to? Oh jeeze, I dunno. I guess that time when we were recording the audio for Oliver and Company, and Billy Joel sang me happy birthday because it was my birthday and we had to spend 12 hours in the studio that day? I guess that was my favorite song.

Jonathan Taylor Thomas: The Cat’s in the Cradle by Harry Chapin. It’s my dad’s favorite. I guess that makes sense, come to think of it.

Edward Furlong: The Woodstock soundtrack or anything where they smash things.

Devon Sawa: I Swear by All-4-One. It’s a secret, but sometimes I call radio stations and dedicate that song to girls who write me letters. Then when they play it, I practice my slow dance moves in case my biggest fan and I meet by accident one day and I take her on a romantic adventure and then I give her a teddy bear and a kiss. On the cheek, obviously!

Elijah Wood: Anything by Brian Eno, it helps soothe me when I’m in my sensory deprivation tank and traveling to other galaxies in my mind.

Jonathan Brandis: Anything by Jimi Hendrix, Janis Joplin, Jim Morrison. You know, they all died when they were 27. Isn’t that something?

What’s your dream car? And if you could have that car, where would you drive it? Maddie, 12, Boca Raton, FL

Luke Perry: My lipstick red Mustang, which I drive around my circular driveway in slow loops, just looking cool and pretending I’m in La Dolce Vita. I’d take it to Vegas, but the Rat Pack is all dead so what’s the point?

Leo DiCaprio: Haha I have so many cool cars it’s hard to pick, but my favorite is probably the 1989 Chevrolet Cavalier I got from Kirk Cameron as a bribe to keep quiet about what happened that night late on set…I can’t say what happened, but trust me that guy’s not so squeaky clean as he pretends. I think it might have been his dad’s car. I wonder how he explained that one? hehehehe

Jared Leto: I bought a tour bus, you know, like bands use? Isn’t that too funny? I don’t know why, it just seemed like a fun thing, like I can take my pals in the bus and just road trip, maybe play some open mics on the way or something like that?

Jonathan Taylor Thomas: My favorite car is a classic T-bird, just like my dad always wanted. Dad, if you’re reading this, I’ve got one in every color sitting in the garage just waiting for you to come home and love…I mean, drive.

Edward Furlong: I lost my car to some guys who thought I owed them money, it’s okay though I still have the dirt bike from T2: Judgement Day, which is enough to get me to and from my community service.

Devon Sawa: My dream car is a teddy bear, like a big one? On wheels? And I just drive around in it and pick up my fans and take them out for milkshakes, the kind where you get two straws and a cherry on top. And then we kiss but only on the cheek, okay guys? And lots of slow dancing.

Elijah Wood: I want to move to Amsterdam where there are no cars so I guess my dream car is a bike. A Dutch bike with a big basket full of fresh cheeses from the market, and a bottle of wine to bring to the dinner my wife Betje is making in the kitchen. And my little daughter Grietje will be waiting in the window for me, and will run outside calling “Daddy, oh Daddy, thank goodness you’re home!” (sighs) I can’t wait to be a grown up.

Jonathan Brandis: My favorite car is the Delorean from Back to the Future. I’d like to drive it into the future and see what I’m up to in my thirties. I think it would be fun to see how my life is going in the future so I can relax and appreciate my life now, you know?

Mark-Paul Gosselaar: Oh that’s funny, I actually kept Principal Belding’s car from the set, it was a sort of gag high school graduation gift from the crew? So I guess that I would like to drive it over to Dennis Haskins’ house, who played Mr. Belding, and just have a visit with him as I do most days when we’re not shooting. It’s funny, people think from the show that we would be enemies like Zach and Belding, but he’s actually my best friend. He’s seen me through some pretty hard times.

Rider Strong: Ben wants to know if we each get to pick. I told him that it’s my interview, but since he’s sleeping over my mom says I have to share everything. Anyway I guess I pick a tank, because I love explosions and stuff. Ben says he wants a Volvo because they’re safe and dependable. What a loser. Hey, ouch! Give me back my nerf ball, damn you! (drops phone on the ground)

Joey Lawrence: Look, I have over forty eight antique cars, I’m second only to Jay Leno at the annual Hollywood Antique Car Auction, I’ve owned and driven cars on my own private estate in Hawaii since I was a child. Don’t tell me about cars, ok?

Jonathan Taylor Thomas:  If anyone sees my dad, I send a picture of him to every post office in America, with a very large reward. Check it out and help out. I am sure he’ll be ready to come home soon so I’ve got his room all ready and everything.

Edward Furlong: Terminator 3 better happen soon because I can’t afford to pay these fuckers back, man. You thought the T-1000 was bad, these guys are gonna pull my fucking toenails out with tweezers.

Elijah Wood: Read Alice In Wonderland backwards. You’ll find the secrets of the universe are buried therein. Once you’ve done that, crack open some Tolkien and a decent sized dose of zoomers. You’ll find the answers you seek.

Jonathan Brandis: Einstein once said, “The fear of death is the most unjustified of all fears, for there’s no risk of accident for someone who’s dead.”

Leo DiCaprio: If you ever get a chance to hang out with Jack Nicholson, tell him I said “Holguin”…he’ll know what I mean. Hehehehehe.

Luke Perry: Just let them all know I did it my way, ok? Can you put in there that I winked, I know you can’t see it over the phone but it’s part of my thing. Thanks, doll.

Mark-Paul Gosselaar: Watch The College Years and read the novelizations of the show! Tune in to our Saved by the Bell reruns! Buy some fun SBTB merchandise that you can only get exclusively through our fan club! Sorry, I’m contractually obligated to say that at the end of every interview, so can you make sure it stays in the piece?

Jared Leto: Like, if anyone wants to hear me play guitar I’m going to be doing a show at the Whiskey A Go Go in April, I rented out the whole place so it’s basically just for fun. If you’re not old enough to come then send your folks or your older sisters! I’ll play some of my original songs and maybe a couple fun covers. Tickets are $45.

Joey Lawrence: Ok get off my back, I’ll say it one time and one time only: Whoa! You people are vultures.