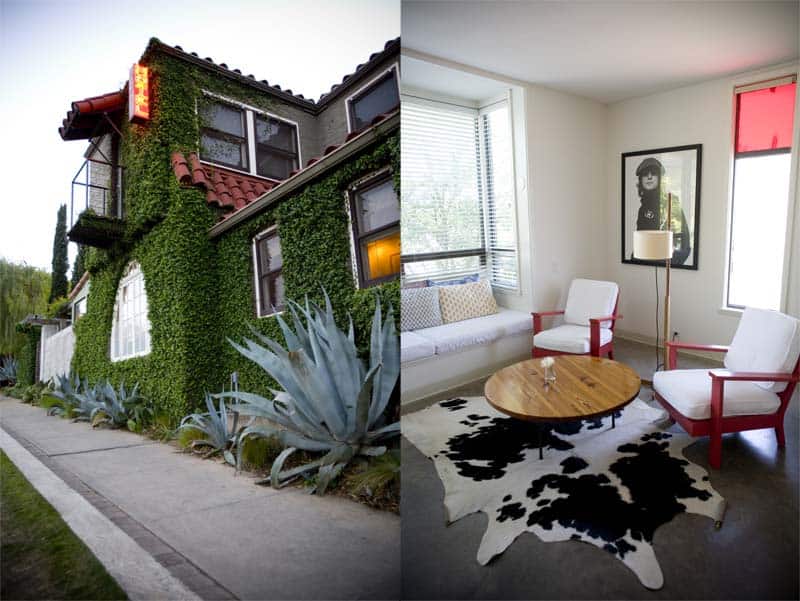 Our lovely stay at the Hotel San Jose in Austin, Texas

In a state that bleeds red, Austin, TX is a study in contrasts. This is, after all, the birthplace of Whole Foods, not to mention the South by Southwest Music and Film Festival (SXSW) and a number of progressive, local movements. Fittingly, the city’s official slogan is: "Keep Austin Weird."

The city is also home to one of the coolest shopping districts, South Congress Avenue (or “SoCo,” as locals call it).  Like so many other gentrified neighbourhoods that were at one time derelict, the revitalized South Congress now boasts eclectic vintage clothing stores and art shops. There is Lucy in Disguise with Diamonds, a costume store where Bob Dylan reportedly used to shop; Allen’s Boots, a SoCo fixture since 1977 and said to be the only place to buy cowboy boots; and Yard Dog Gallery, where you can find funky folk art.

In my opinion, though, the coolest place to visit in SoCo is the Hotel San Jose, a boutique hotel with over 40 rooms and owned by local lawyer-turned-hotelier, Liz Lambert. (Aside from the San Jose, Lambert’s hotel property management company, Bunkhouse, owns the nearby Hotel San Cecilia and El Cosmico—an artsy campground of sorts located in Marfa, TX—among others; Bunkhouse also owns the popular coffee, beer, and sandwich truck that is situated adjacent to the San Jose in a parking lot.)

The San Jose lies in the epicenter of SoCo, but is inconspicuously hidden by shrubbery. Its hotel room interiors are chic and minimalist in design (think bare concrete floors, mid-century furniture, and faux cowhide area rugs); the atmosphere is Zen-like. There is a large outdoor courtyard with tables where guests can have a drink, or where they can rent one of the hotel’s typewriters or Polaroids from the front desk and make like Jack Kerouac or Robert Mapplethorpe, respectively. Guests can also take a dip in the swimming pool.

With all these trendy trappings, some might be tempted to dismiss the San Jose as another wannabe hipster haven. But the hotel actually comes by its low-key and humble vibe honestly: the former motor hotel, originally built in the 1930s, fell into disrepair over the years and ultimately became populated by those living on the fringes of society (unemployed artists, drug dealers, and the like). With some residents living there for months at a time, the San Jose was described as a “rundown Melrose Place.”

After Lambert acquired the hotel in the late ’90s, it went through a lengthy renovation in what could only be described as a labour of love. What arose from the ashes was a charming boutique hotel with real soul; aside from being a fun place to hang out, the San Jose organizes fundraising activities and also runs a free-of-charge “South by San Jose” festival concurrent with SXSW that showcases local and touring acts.

Indeed, we experienced *zero* attitude during our stay at the San Jose. The front desk staff was down-to-earth and attentive. Plus, the house manager recommended some of the best local dining spots around and was able to comment on the local music scene intelligently—a major bonus, considering Austin has been dubbed the Live Music Capital of the World.