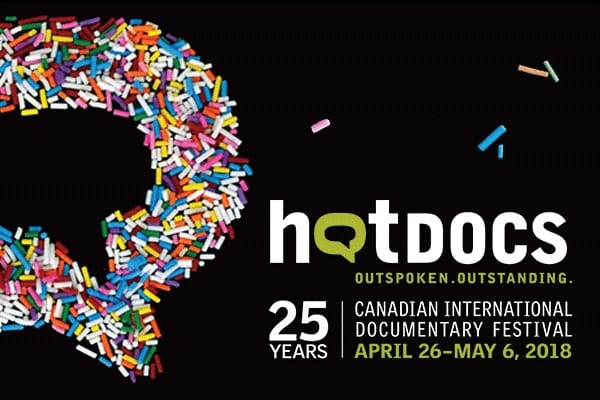 In Praise of Gender Parity in the 2018 Hot Docs Lineup

Sometimes our feminist dreams do come true. And that’s why it’s so exciting that Toronto’s own Hot Docs Film Festival achieved gender parity with its 2018 lineup. As they say in The Handmaid’s Tale, praise be! After all, it’s about damn time.

This year marks the 25th anniversary of the Hot Docs Festival, but it’s the first time it will feature an equal number of male and female filmmakers. That’s right, half of the 246 films on this year’s roster were made by ladies! When I heard the news yesterday, I retired to my bedroom for a solo dance party.

Hot Docs achieving gender parity is unassailably good news. Only last week, many of my friends and I read an article by IndieWire that asked the question, if music festivals are pledging gender-equal lineups, why can’t film festivals do the same? The answer is that misogyny is deeply entrenched in the film community. Don’t believe me? Well, it’s 2018, and the conversation about women in film is so backward that a random white dude recently mansplained to me why Lady Bird was not as good a feminist film as the feminist films he liked. He did so on International Women’s day. In other words, the guy achieved Peak Sexist Irony.

Hot Docs’ programming decision is an excellent one on many levels. First off, we ladies have stories to tell and things to say. For years, women have been excluded, and it’s nice to see a film festival acknowledge there is no lack of talented female filmmakers with movies people like you and me would like to see! So this decision is a victory for fairness.

But it’s more than just fair; it’s a “fuck you” to the sexist assholes that troll us on Twitter and try to convince women they have no right critiquing–let alone participating in–the film community. By the time Hot Docs wraps up on May 6, it will have proven wrong all the sexist fanboys who argue gender-equal lineups result in a dip in quality.

Finally, Hot Docs’ decision is good for society as a whole and not just for female directors. I’ve always believed documentary film is a force for the good–a way to learn about our world, to see through the eyes of others for a few minutes or hours at a time. Docs are an immersive art form that allow us to access truths, whether it’s the truth about what it’s like to be a fifth grader competing in Scripps National Spelling Bee, or what it’s like to be a Syrian refugee. Docs build our perspective on the world, which in turn builds our empathy. And therein lies the importance of diversity: documentaries can only live up to the promise of educating us on the perspectives of a wide array of other people if people of all races and genders are meaningfully included. No, there’s nothing wrong with being a white male filmmaker; however, there’s nothing wrong with being a woman of colour filmmaker either, but you would never know that when you see how few are invited to mainstream film festivals. It’s time celebrate the validity of a broader range of stories.

The 2018 Hot Docs Documentary Festival will begin on Thursday, April 26 and end on Sunday, May 6.