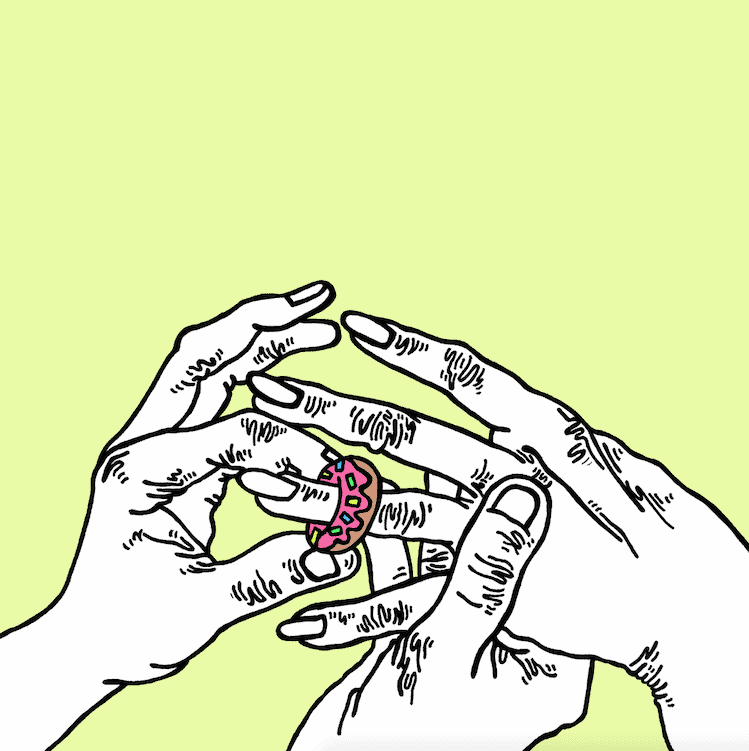 Earlier this year I was recognized by BlogTO as one of Toronto’s top illustrators to watch. That’s fun! I love collaborating with local businesses and likeminded creatives. I’m used to being approached due to my distinctive style, and I feel incredibly lucky to have had the success I’ve experienced thus far.

I’m still accepting client work but for the most part, I’m on an unofficial “hiatus” with freelance illustration while focusing more on my other streams of income. And honestly? It’s been pretty nice because for the first time in what feels like years, I’m drawing for myself instead of drawing for somebody else. And with this break, I’ve realized something:

Being a professional artist is actually really, really shitty.

Don’t get me wrong, I get paid. I don’t get paid well, but I get paid. On average I’ll make a couple hundred a month from a few clients, which helps with food and whatnot. Sometimes it’s less than $50, and once it was over $1500. I’ve had amazing clients and I’ve had the polar opposite.

Luckily I have a full-time job, so I’m fine financially. The “starving artist” stereotype is long gone, because (with the exception of rare 9-5ers) most have accepted that art is best kept as a side hustle instead of being relied on as the sole source of income. If I were trying to “make it” as an artist and nothing else…eek. I probably wouldn’t be starving, but I’d likely have five roommates and be ten months overdue on a dentist appointment.

A lot of people have commented that I get to “draw cute things for money” and have asked me for advice on how to get started themselves. But it’s not all it’s cracked up to be. Here’s why:

Illustration is a very underpaid field. Unless you’re creating an image intended for print or publicity, then you will be paid based on the quick turnaround time of said piece. In other words: not very much. Most of my drawings are used for social media/digital marketing/blog purposes, so these pieces will have a shelf life of a few days, a week if I’m lucky.

And hey, I get it. I’m on a budget, too. Unless you’re being approached by a huge brand or company, then they likely have a very limited budget for this, or they haven’t hired an illustrator yet and have no idea how much one should get paid. But, for the love of glob, don’t ask a creative professional to work for you for lower than minimum wage.

And then there are the satanic people that expect you to work for free. Exploitive demands are disguised by terms like “exposure,” as if they’re offering you some sort of life-changing unpaid internship at the publication of your dreams. There are circumstances where this is okay — I’ve done free design work for close personal friends, and for businesses/fellow artists that I genuinely support and are thankful for my help in return. I like to call that a “collaboration” rather than a “service.”

But I cannot make this more clear: “freelance” and “pro-bono” are not interchangeable terms. You wouldn’t approach a musician to write your company a song for free, so treat artists the same way. A service is a service, and pay should reflect this.     I’ve had people message me with requests along the lines of “OMG! Huge fan of your work. I’d loooove to commission you to paint a portrait for my BF’s birthday” and then I chat with them a bit, figuring out exactly what they want and what kind of budget they have to work with. I tell them that I’ll do something for $100, $150 or so — still an incredibly reasonable price as it includes initial communication, contracting, brainstorming, drawing, editing and invoicing. If I were charging a fair hourly rate for any of this nonsense, I’d be raking in about $500 per piece. Yet in response to that rate I usually hear something along the lines of, “Ohhh that’s way more than I thought you’d charge. Can you do it for $20?” It’s nothing to get upset with a client over, but gets very disheartening the fifth time around.

Even a very well-known media publication (that will remain nameless) told me last year that $500 for ten drawings was “asking too much.” And when I do up the price and charge something more fair, clients often stop responding or try to haggle. So I get stuck in a weird grey zone: do I accept the underpaid work, or request a fair price and risk getting no money at all?

More often than not, my client will be happy the first time around. I do this by carefully discussing all details with them before I start designing, showing them sketches along the way, and including in our contract that I will only do minor digital edits and will not redo the design. I learned this the hard way years ago. There have been projects I’ve completed and never been paid for, due to the client not being 100% about the design. Even to this day, I still have some outstanding invoices for which I hound people over email every month or so.

And then there are clients that will blatantly insult you. I dug through my archives for the following quote. [Context: I created exactly what the client had requested after already starting from scratch once before.]

“Honestly I’ve been ruminating on how to say this without sounding insulting because I am a great admirer of your work, but I have to admit that after seeing the projects you’ve posted on Instagram and Tumblr I expected something a lot more innovative. After witnessing what a talented designer you are I can only conclude that you’re too busy with other endeavours to focus on this one, or I was unable to give you the direction you needed. Either way, the design you sent couldn’t be further from what I was expecting.”

I mean…I get where you’re coming from. You have a precise vision, and you want what an illustrator does to reflect this. But don’t get mad if they do something in their style, which you knew they would since you saw their portfolio beforehand, and you don’t end up liking it. You don’t need to be passive aggressive and straight-up rude over it. Clients should prevent this by providing the artist with samples of similar pieces, and paying them a fair price so they’ll be able to potentially re-do or edit the design.

I’ve personally found that visual art is the worst field for this because a lot of the time, you’re creating something for a creative who can’t create something visual themselves but has a specific vision nonetheless. They resent you for not being able to create exactly what you wanted (because it’s your fault for not being a mindreader) and take it out on you accordingly. Once I redid a piece for a rapper in Toronto (I never even saw the redone piece on social, so I’m assuming he ditched the whole concept) and his response was “Much better. I was shocked by how bad the first one was, lol.” Because adding “lol” to the end of an insult makes it okay, right?

3) THERE’S A TOTAL LACK OF PROFESSIONALISM.

I’ve been approached by local businesses run by girl bosses that seem really cool, and I’ve given them the benefit of the doubt when communication has strayed from professional mannerisms. But even last week, after two months of trying to chat with the founder of a start-up I’d been approached by, we had a phone meeting set up. Fifteen minutes after she was supposed to call me, I tried calling her – no response. I sat at my desk waiting for an hour, then carried on with my life. I sent a polite follow-up email the next morning, reminding her that we had a meeting and asked if email communication would be best moving forward. Two days later, she sent me an apology-free note saying she was “too swamped” for the project, but “best of luck in the future!”

If you change your mind about hiring an illustrator, that’s okay. We’re freelancers and most likely have other work coming our way. But don’t leave us hanging, don’t miss meetings, and most importantly, don’t waste our time.

Rule of thumb: If you’re going to reach out to an artist, remember that you’re hiring a professional and you should conduct all communication to that standard. Don’t ghost them like you’d ghost an ex.

MY CLOSING ADVICE, AND MY SOLUTION:

If you’re hiring an artist: Be nice to them. They are human beings too and stuff.

If you’re working as an artist: Consider client work when it becomes available. Accept it when a project speaks to you on a personal level. Always keep drawing for yourself, and keep any and all creative projects passionate. Because otherwise, it’s just work and will make you miserable like it made me.