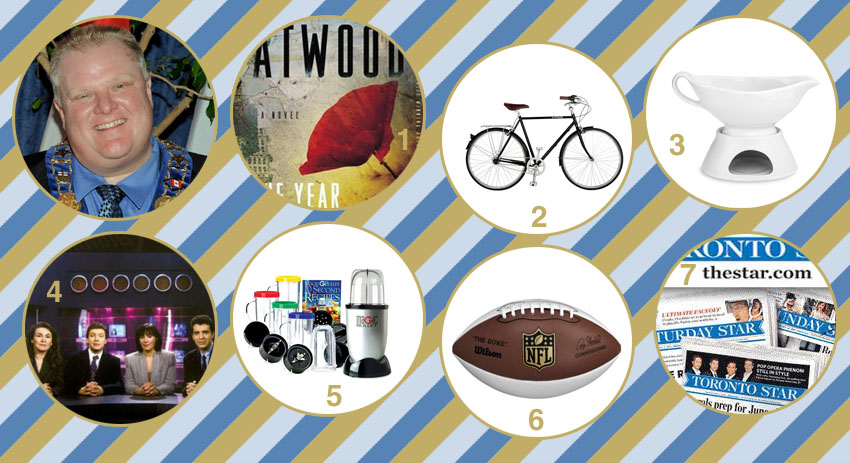 Year of the Flood- Margaret Atwood
Some light reading for the holiday season. We endorse Rob gives it to Doug to read as well, just so that, you know, he knows who she is.
$32.99 at Chapters, or free to loan at any Toronto lie-berry.

Linus Roadster
Maybe, just maybe, this whole time the plight of the Toronto cyclist has been marred by the fact that Mayor Ford doesn’t know how much fun it is to ride one of these things.
$699.95 at Bikes on Wheels

Heated Gravy Boat
To keep his gravy warm, steamy and delicious. Because he probably deals with enough stale gravy at work all day, am I right?
$72 at Williams-Sonoma

Magic Bullet
Mr. Ford is no doubt been a busy guy. With a Magic Bullet, he can make himself healthy breakfast smoothies that – bonus! – come with lids so he can take them with him to city council meetings. He’s been looking kind of peaked lately, perhaps he needs some more fruit in his diet.
$34.99 at Canadian Tire

Wilson Official NFL Football
Something to hold onto as he continues to wish upon a star for Toronto NFL team.
$39.99 at Footlocker

Subscription to the Toronto Star
In case the Toronto Star does publish that front page apology to Ford, this way he’ll get it delivered right to his Etobicoke doorstep.
$3.69/week for six months