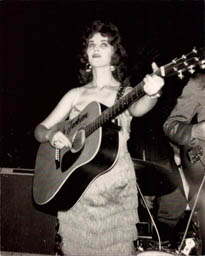 As the first female rock n’ roll performer, badass 15-year-old Wanda Jackson didn’t give up when label executives told her that “girls don’t sell records.” She went on to top charts with hits like “Let’s Have a Party” and “Hard Headed Woman.” Since the 1950s, Jackson has remained active in the country and rock n’ roll communities. Now 73, she recently released her 33rd album, produced by Jack White no less, and is embarking on a full-scale North American tour, with Canadian stops in Vancouver (May 31), Montreal (July 2), Ottawa (July 9), Quebec City (July 10) and Edmonton (August 5).

Style Best Described As: Cowgirl Glam. In fact, almost every famous country starlet owes their style to Jackson, “I was the first one to put some glamour in the country music – fringe dresses, high heels, long earrings.”

Hottest Hook-Up: With the majestic title of Queen of Rockabilly, it’s only fitting that Wanda’s hottest hook-up was with a king… The King, to be exact. Wanda and Elvis briefly dated while touring together in the 1950s.

For Her Biopic We’d Cast: Zooey Deschanel – if she was willing to put on some of Wanda’s sexy curves for the part. She may be the only singing actress who could convincingly pull off Jackson’s gritty vocals.

In Her Own Words: “It seems like the good things that have happened in my career are things that you don’t try to plan and push… it just seems to happen.”