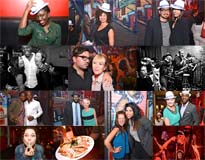 Toronto is a city that celebrates diversity in its amalgamated cultural identity. Ah Sey One, (Jamaican slang for “great and cool”) the second installment in Sceneopolis’ inTO series, was a celebration of the rich history of reggae culture, and Harlem Restaurant was the best possible venue for a reggae music shindig.

Accessible through a graffiti-covered alleyway (doubling as their patio), the Harlem Restaurant on the east end is known for a more intimate vibe than its west-end counterpart. Attendees were wearing complimentary white fedoras while sipping on Brugal rum-based cocktails while Harlem staff circulated the party with platters of Jamaican-inspired foods – most notably the coconut shrimp and mini-rotis.

Cameron Bailey, TIFF artistic director and reggae aficionado, hosted Ah Sey One with a modest smile and an undeniable charisma that blew the crowd away. A self-proclaimed “Jafakin” (fake Jamaican), Bailey’s passion for the music was palpable as he led the discussion on stage with TheSattalites on the history and culture of reggae.

“Reggae is a syncretic music that takes influence from all different places and forms something new out of it,” says Bailey, waxing enthusiasm on the versatile history of reggae music and how it applies to a way of life. “That’s a great approach to living, you can’t try to live your life in any kind of pure fashion, but should take in everything that’s around you and make something new out of it – and reggae music has always done that.”

Expressing that “reggae is more than a musical genre, but a way of understanding the world,” Bailey’s love for the music goes beyond just the sound to an experience that reverberates through the body. “It’s a physical, visceral response you get, from the bass, from the drum, from the beat that lands on the third beat of the 4/4 rhythm just like a truck hitting you,” describes Bailey of his favorite reggae experience, when he saw Steel Pulse live.

According to Fergus Hambleton, one of the original members of The Sattalites, Ska was one of the first Jamaican-recorded genres that gained popularity in the Carribean. “[It] came out of a combination of American rhythmic blues, jazz, African-style folk songs, and Jamaican Peruvian folk songs all mixed together,” says Hambleton of reggae’s amalgamated nature.

Although Toronto isn’t exactly a hub for reggae music, both Bailey and members from The Satellites got nostalgic when those “good ole days” when the iconic Queen West venue The Bamboo got brought up. Ultra Supper Club had opened in its place, (now reincarnated as Cube Nightclub), and The Sattalites apparently used to perform at The Bamboo so often that they should have been given the honorary house band title.

A Toronto band that’s also the longest-standing reggae group in Canada, The Sattalites, with 20+ years and two Juno awards under their belt, had the vibe of a well-oiled machine, a group of very old friends that love nothing more than to play music together. Brendan Canning, (former bassist for Broken Social Scene and now back with Cookie Duster, an alt-rock veteran band) another special guest at Ah Sey One, was the resident celebrity DJ, spinning reggae throughout the night, and he even jumped on bass duty closer to the end of The Sattalites’ set.

Ah Sey One felt like one of those intimate backyard parties that you accidentally stumble upon where everyone guffaws over shared inside jokes and speaks the same slang. The purpose of the inTO series is to give you that insider experience you never would have had the opportunity to be a part of otherwise, and Ah Sey One truly showed us just how “great and cool” reggae music and culture really is.

Check out the Sceneopolis website for what’s next on the inTO series calendar!