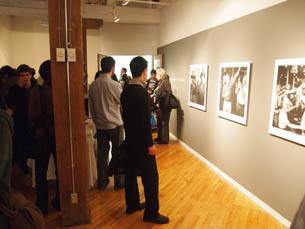 Last night I attended Ruth Kaplan’s Some Kind of Divine opening at the Ryerson Gallery and was shocked to discover that the photographs documenting religious zealots were not, in fact, taken in Southern USA bible belt country but many did hail from the Toronto Airport Christian Fellowship and churches around Bloor and Lansdowne. Images captured people at moments where they had seemingly found god. Crying, possessed and at times hysteric – without context, one might assume that the subjects had just swallowed a double dose of ecstasy and were insanely high, “Yeah…I think some of them were,” remarks Kaplan.

Another observation was that the photos look as though they could have been taken anywhere between 1960 and 2010, but in fact were all shot within the past few years. Kaplan agrees and attributes this to her creative decision to use traditional lighting, black and white documentary style. Personally, ever since I saw Bruce McDonald’s film, Highway 61, starring Don McKellar, way back in ’91 – I too have been fascinated by fanatical Christians (especially with those voodoo snakes) but for Kaplan it was the “exoticism” that drew her in, she likens the religious acts to “theatre performances.”

So, did this project sway her from her atheist beliefs? “No…I find religion scary…especially blind faith where one surrenders to the other.”

Each photo definitely captures an intense emotional moment where the subjects seem to be pulled out of their natural state, almost hallucinatory. To fuel the debate, Kaplan also has videos wherein she has interviewed a range of regular people regarding their take on religion and what they believe. It’s certainly a thought provoking exhibit and I know I left feeling a little more spiritual, perplexed and philosophic than when I walked in.

See all the shows at Scotiabank CONTACT Photography Festival – up until the end of the month! http://scotiabankcontactphoto.com/