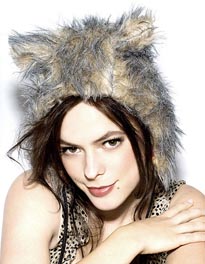 Aussie import and spunky pop songstress Lenka is set to Lily Allen her way into the hearts, minds, and playlists of people everywhere. She let SDTC pick her brain on everything from her sixties-inspired nymphette style to the music from home and away that inspires her. Ladies, meet Lenka.

Lenka’s career path has been a Jenny-Lewis-esque jump from acting, to playing in a band, to emerging as a solo artist. “The responsibility is all on me now,” she says. “That is both empowering and frightening!” Her experience as an actress makes watching her songs, which have been featured on 90210 and Grey’s Anatomy, worked into a script especially interesting. ” If the choice of my song really enhances the scene, it can be quite moving. I get a buzz out of my song being used to portray a character’s emotional state.”

She takes cues from a variety of acts as inspiration for her sound. She lists ‘Unravel’ by Bjork, and ‘Because’ by The Beatles as songs she’d like to cover, and is a homeland girl at heart when it comes to music: “INXS was the first concert I saw, and I think Michael Hutchence had so much charisma, sex-appeal and talent. There are some contemporary Aussie bands i love too, like Architecture in Helsinki, New Buffalo and Dappled Cities.”

Her music isn’t the only thing catching people’s attention. “I wear a lot of vintage, so I like designers that draw from old styles, like Betsey Johnson. I also really admire Vivienne Westwood and Alexander McQueen,” Lenka says, of her ingenue-esque fashion choices. As aesthetic inspirations, she lists “iconic characters like Snow White, Dorothy, Lolita, Betty and Veronica, Rizzo from Grease.”

Raised in Australia, Lenka is now living an international lifestyle. She’s currently based in L.A., and her favourite thing about life on the left coast? “The vintage shopping!” She says Berlin is her favourite city in the world, but Portland, the new west-coast hipster mecca of indie rock and latte art, is a recent fave. Being away from home does have it’s disadvantages, though. “[I miss] the beaches, the food, my friends and family, the art scene, sharing childhood references.”

Her solo album, which was released this past September, was recorded in Woodstock, New York, and right here in Canada, at a studio in Montreal. “It was a winter wonderland,” she says. “The snow made me feel quite poetic and lonesome. Appropriate for recording music!” The breakout hit from the album is ‘The Show,’ a catchy ode to the chaos and confusion of falling in love, but the song closest to Lenka’s heart is ‘Skipalong.’ “It is the most soulful, and the first recorded.”

Get A taste Of Iceland: Food, film & music