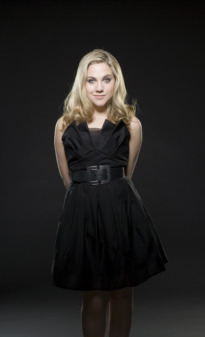 From the beginning of Degrassi: The Next Generation, Lauren Collins was pitch-perfect as drama queen Paige. In the new movie Paradise City: Degrassi Goes Hollywood, we find Paige pool-side in L.A., picking up after a bitchy reality TV star’s puppy in one breath, and convincing Marco over the phone that life as a Hollywood stylist is fantastic in the next. We talked to the lovely Lauren Collins about life on Degrassi St., rooming with Ruggiero, and that kid Drake.

She Does The City: It seemed like Paige was becoming more serious in season 7 with her intense work in the fashion industry and her willingness to have a relationship with Griffin despite him being HIV Positive. The trailer for Paradise City suggests that Paige is returning to her earlier drama queen ways. How do you feel about this shift in your character?

Lauren Collins: I don’t think I saw it as a shift because Paige has always had that fiery personality. The other thing that has remained constant for her since leaving Degrassi is that nothing seems to work out in her favour. Relationships, jobs, school… and the movie continues in that vain. Paige has spent the last few seasons learning the lesson of small fish/big pond (versus the big fish/small pond she experienced being Queen Bee at Degrassi). Hopefully she finally gets it now!

We scaled down to a much smaller crew and had a VERY limited time to get stuff done. We actually only shot in LA for 2 days which is pretty incredible when you see the movie. It was exciting though, lots of rushing, an amazing energy. I’d love to do it again, the LA crew was so much fun!

What were some highlights of your time in Los Angeles?

Vivica A. Fox took us out for dinner at the Chateau Marmont which was a great time. She’s a very cool lady with so much personality, yet still down to earth.

I read that Adamo Ruggiero and you are roommates. Do you two still live together? Can you describe the apartment that you share(d)?

I split my time between Toronto (where I live with Adamo) and Montreal (where I live with my boyfriend). Our place in T.O. is GREAT. Sadly, we’ll have to part ways with it eventually since we rent! It’s the third floor in an ancient, but beautiful, house. Exposed brick and original hard wood floors! So much of our personality can be seen all over the apartment, it’s very cozy and lived in.

What are the perks and/or drawbacks to being a young celebrity in Toronto?

I feel like in Toronto we live in a bit of a bubble, we aren’t dealing with paparazzi and tabloid fodder. It’s nice because we can lead very normal lives… but the downside… few perks when it comes to getting into parties or events!!!

Paradise City features the acting debut of MTV Canada’s Dan Levy. How was it working with him during his first acting stint?

He was fantastic. I’d been on his show several times but this was an opportunity for us to really get to know each other. He is such a wonderful person, so genuine and HILARIOUS. He did a really great job in the movie and I think this will be the first of many acting gigs for him!

Perez Hilton has a cameo in Paradise City. This is a man who has described your former castmate, Shenae Grimes, as a “bitch” and a “tart” on his website. How did you feel about working with him?

I was definitely nervous because of his important (and controversial) role in this industry but I must say he was an absolute pleasure to have on set. The persona he puts out there on his website is very different from the guy I met on set that day. He was sweet, well prepared and very happy to be a part of the project!

Paradise City looks at the issue of young actresses becoming tabloid fodder. Have you ever felt pressured to do publicity stunts or felt that you’ve been unfairly depicted by the media?

Again, living north of the border has its upside! While I’ve definitely dealt with the odd unfortunate article or silly rumour, I’ve remained relatively unscathed. But even when those scenarios do arise, you have to grin and bear it. It comes with the territory and I chose this line of work. What matters to me are the opinions of my friends, family and colleagues. As long as they know the real me, I’m happy!

Do you have any career tips for young women with Hollywood ambitions like Paige?

DO NOT DO WHAT PAIGE DID!!! It’s easy to get caught up in this crazy industry but by surrounding myself with people I love and trust, I’ve managed to keep my feet on the ground and head on straight. That has always been my number one rule. I also constantly check in with myself. Am I still doing this for the right reasons? Do I still love the art and the creative side of the job? It’s imperative that your heart is in the right place.

So…has Drake introduced you to Kanye West yet? What do you think of his recent climbing up the music charts?

I wish!! I’m so genuinely happy for him. He’s really one of the most talented people I’ve ever met and I think we all knew it was just a matter of time before he became a huge star. I wish him all the best!

Being surrounded by people I love, doing what I love… and finally getting a dog.

Where do you like to hang in Toronto when you aren’t working?

Before I moved downtown, my knowledge of Toronto was fairly confined to Yorkville and West Queen West, but now that I’ve been able to explore and wander I’ve discovered so many unique areas in this wonderful city. Lately, I’ve been paying more attention to the east side. The Distillery District is a favourite thanks to Balzac’s Coffee and there are so many cute bars popping up all over Queen East! I also just love hanging out at home. The apartment Adamo and I share has become the meeting spot for all our friends.

What’s your motto in life?