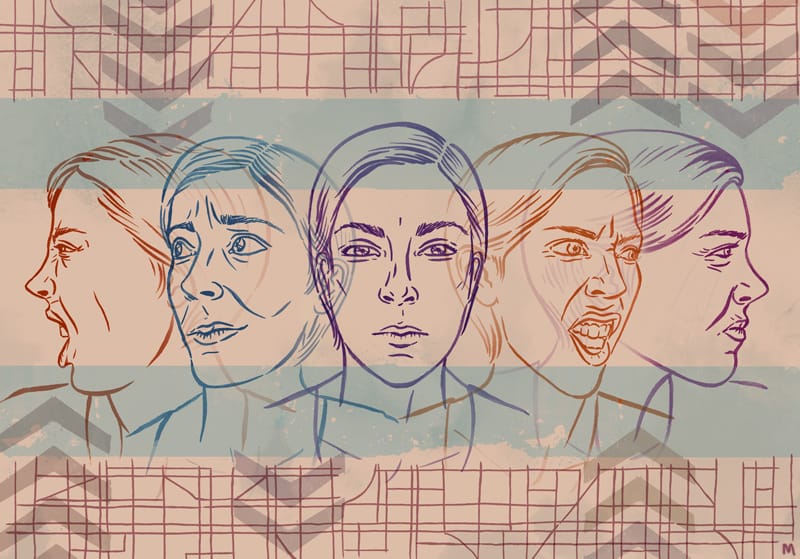 "What can be said to someone who feels justified and entitled enough to holler in the first place?"
Life Stories

Searching for the perfect response to street harassment

"What can be said to someone who feels justified and entitled enough to holler in the first place?"

Last month Prima Feminista wrote about masculinity and harassment in the streets, calling up questions about safe spaces and self-protection. Like her (and I imagine like most of our female readers), I’ve struggled with how to deal with street harassment and “cat calling” (such a cute term for such a terrible power play) since I was young.

There’s that moment when a yell comes out of a car window and lands directly in your heart, shocking you out of your day-to-day, reminding you that no, you can’t just walk down the street and feel comfortable; that there is something inherently wrong with our society, a flaw in the definition and performance of masculinity, and it makes you scared, annoyed, angry, or just shocked because someone else is insisting that you are an object to be defined by their eyes and their words. And while you gather your thoughts and wonder what you could possibly say or do to make this person, these people, this world understand that your body is not theirs to dominate, the car drives off and you are left feeling defeated.

In these brief moments, how can we turn this power play back on our harassers? In her article, Prima criticized society’s suggestion that women should try to “reduce their risk” of being harassed (or worse) by walking in well-lit areas and taking self defense courses. This subtle form of victim blaming completely ignores the fact that street harassment happens at all times of the day, regardless of location or dress.

So I find myself asking the same question as Prima: How can we end street harassment and feel safe in our own cities? In the long term, I believe that teaching gender equality to our future generations will help alleviate this issue—but what about now? The people yelling at us from their balconies aren’t young boys with open minds, they are adults who no longer question their own behaviour or beliefs. But that doesn’t mean they can get away with it. Their behaviour cannot go uncriticized.

For the past few years, I’ve been in search of the perfect response. The perfect in-the-moment reaction to all the catcalling, all the “Nice legs!” and, “HEY SLUTS!!!” that would both unsettle and interrupt harassers so that they would never yell at another woman again. There must be some answer to their calls that would make them stop, see the situation clearly, and reflect on their sexist actions.

But what can be said to someone who feels justified and entitled enough to holler in the first place?

I’ve been struggling with this for a long time and have tried a variety of tactics. Each of them are flawed in some way, but have guided me towards trying to craft the perfect one.

Blah. I want to barf on this option. “JUST IGNORE THEM?!” What? I have to pretend I can’t hear their screeching? I have to be the “bigger person”?? And if, as a friend said to me recently, “all they want is attention,” does ignoring them really deflate their sense of bravado and entitlement?

I doubt it. Silence doesn’t say, “Stop. I will not allow this.” It says, “Go on, I won’t speak up against you.” Passivity can be misconstrued as acceptance and I do NOT want them to think I’m cool with all this bunk drivel. That being said, silence it is often the safest option, and if engaging your aggressors seems futile or dangerous, I suggest it.

Out of a confusing rush of surprise and anger I often react to sexual harassment by trying to desexualize myself. I make strange faces or noises in an attempt to creep out the creepers. I want to unhinge their assumptions about my gender performance. This sometimes works (in the short term) because it recontextualizes the object, me, for the harasser, but it doesn’t address the initial act of objectification. I am now a wonky weirdo and they will go find someone seemingly less wonky to howl at.

And sometimes it doesn’t work at all. Last time I tried this, squishing my face up and making high pitched beeping noises (why was that my gut instinct??), the man slowed down his truck, drove next to my bike, and asked “So, you a drama major or what?” Blah. Defeated.

Eye Contact
There’s a reason our drama teachers made us do it over and over again. Seeing and being seen are powerful psychological tools that can help question the subject/object relationship. But it’s a battle of power that I am usually too uncomfortable to take on. And with any kind of aggressive confrontation, I usually don’t want to engage harassers further. I also have to assume that if they are boisterous and ignorant enough to yell in the first place, they probably aren’t going to understand why I’m staring at them. They’ll probably think I’m interested in them. I am not interested. I’m trying to regain my subjectivity, thank you very much.

Verbal contact
Filled with rage and indignation, I have been known to scream, “FUCK OFF, YOU FUCKING ASSHOLE” in response to catcalls. But sigh, that response is too simplistic and too combative. The irate woman is kind of a cliche now, and it gives harassers an excuse to laugh off their responsibility. I also find it amazing how many people react as if they’ve been insulted: “Bitch! I whistled at you! It’s a compliment!” Really? REALLY? Do you not understand how, in this rape culture, you whistling at me from across the street might make me feel objectified, unsafe, and violated?

Which brings me to my last option.

I want these hollering scrubs to know that what they’re doing is wrong, and I want them to stop doing it. I doubt these men question their own reified notions of masculinity and space, so I will help prod them in the right direction. A nice firm prod. Too aggressive and they’ll become defensive; too passive and they won’t notice.

Here’s what I’ve come up with:

Okay, okay, it’s not perfect. But I think attention needs to be brought to how their thoughtless words are affecting women and the phrase focuses blame on the perpetrator. “Uncomfortable” is a simple but meaningful word that carries some weight, and I think the natural response to a statement like that is “Why?” This might help them reflect a bit. Of course, now I will have to think of a more succinct, simple way to say, “Every time you yell from your window you are perpetuating a history of male dominance. Your behaviour suggests women are nothing more than sexual objects, designed for your pleasure.” But it’s a start.I know “You are making me uncomfortable” can’t be used in every situation, and that every encounter will require a different reaction. Some will be too dangerous to allow for conversation, while others will go by too quickly and still others may seem too “innocent” for necessary criticism (beware the subtle sexism, sweetie!).

Maybe trying to educate in these moments is impossible, and maybe my cool new go-to phrase won’t work because, let’s face it, I still haven’t been calm, collected, or comfortable enough to use it. Realistically, people aren’t likely to change based on my reaction alone, no matter how fine-tuned it is.But maybe they will change if we all react differently—if we all agree to safely fight against street harassment when it happens. What do you do when someone hollers your way? I’d love to have some options ready for when it happens again. I want something quick, easy, and direct that says, “Stop.” (Wait: “Stop.” Is that it? Could it be so simple?)

Do you have a go-to response? Does it work? If you feel comfortable, please share!