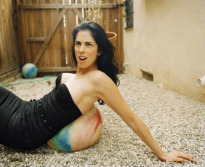 When a male compatriot and I made our way to Massey Hall last Friday, for the Just For Laughs Gala hosted by Sarah Silverman, we had one goal in mind. Not comedy, seduction. Talking our way into the pants and hearts of Silverman and her balding associate, David Cross. We pocketed a small bottle of whiskey, to grease the wheels. Too bad Silverman admitted in her opening monologue that she doesn’t drink. FOILED! Don’t worry, Sarah, we’ll do it for you.

Balancing through a fit of hysterical laughter on one of those Massey Hall chairs while Sarah plays guitar and talks about pussy is a supreme challenge, an occupational hazard in the art of comedian seducing. Other on-the-job obstacles include listening to cheesy pseudo-rock played live by an in-house band behind a screen, and having your heart broken when the comedian of your dreams (what’s up, Mr. Cross) performs a half-assed set devoted to time-mugs, and other useless items you can buy through Sky Mall. But the beauty of a showcase, especially for the comedian-seducer, is that when one comic disappoints, there’s another to take his place.

Cue John Mulaney, adorable SNL writer and man-child, who opened the evening riffing on Hyundais and being amazed anyone could fear him after dark. Could he be my stand-up stand-in? Or Emmy winner Louis C.K? I don’t know-I’m not ready to take on the responsibility of dating a single parent. Plus, he’s pretty convinced driving an Infiniti means he’s going to hell-so it’s not really worth a long term investment. Getting stoned at the Bata Shoe Museum with Arj Barker is much more my speed-and then I’d get Cheetos.

As the comics came out for their final bow, piggybacking each other and failing in an attempt to make a human pyramid, we saw our chance-one quick dash backstage, and the funny people would be ours! But alas, a stark stare-down from security, and the unfortunate realization that we’d shared too much whiskey between us to dash fast anywhere, meant our evening ended eating New York Fries in the basement of the Eaton Centre, instead of backstage smoking joints with the who’s-who of popular comedy.