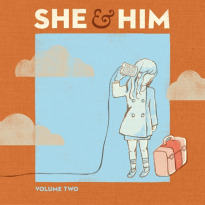 She & Him’s appropriately titled second album, Volume Two, couldn’t have arrived at a better time. As summer creeps up fast and fantasies of long days at the beach run rampant, the latest collaboration between Zooey Deschanel and M. Ward has produced a collection of sunny pop songs that could easily become the soundtrack to summer 2010.

Picking up where Volume One left off, this album falls somewhere between ’60s sunshine pop and Nashville twang. Deschanel once again channels lady greats from yesteryear like Patsy Cline and Nancy Sinatra while Ward’s complex harmonies and Beach Boys-esque orchestrations provide a perfect backdrop to the carefree lyrics. If the duo’s goal is to make you long for a drive along the California coast, they certainly achieve this.

The opening track of “Thieves” has Deschanel, our heroine of love lost, reflecting optimistically on what happens when two people go their separate ways. “We two are makers/Just made this mess/Two broken hearts don’t beat any less,” she sings. Other highlights include the catchy “Over It Over Again” and “In The Sun,” the right-at-home cover of NRBQ’s “Ridin’ In My Car” and “If You Can’t Sleep,” the album’s dreamy lullaby closer.

Even if your summer plans (tragically) don’t include gallivanting along the west coast in an old Chevy, Volume Two makes it easy to dream up summer bliss.