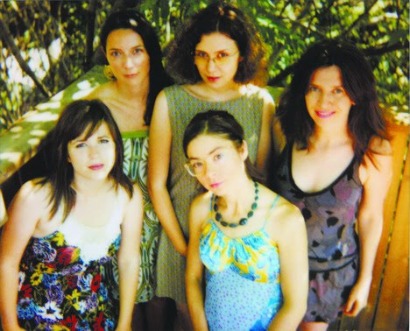 I can’t even really describe to you why I think this is so awesome, but it definitely is. Packing shows at The Garrison and now doing a Canadian tour, it’s obvious that I’m not the only one who is spellbound by Sheezer.

You see, I have several pivotal memories involving Weezer, with the deepest ones dating back to high school. I distinctly remember inviting about ten girls over to my house to help me consume a 1.5litre bottle of bootlegged vodka: The Blue Album was our drinking soundtrack.

I would kick off my weekends by heading to the Midtown “bakery” at Yonge and Eglinton. It looked like a regular donut and coffee joint but I discovered that if you told the cashier you wanted vodka, they would say, “Meet in bathroom.” Don’t worry, I’d also buy a muffin so that everything appeared normal to other bakery patrons. Then I’d go hang out in the wheelchair washroom with my oversized Mountain Equipment Co-op bag. After what felt like an eternity, I’d hear a knock on the door. I’d let some guy in, who would then pass me a vat of Russian vodka in exchange for $60, which in those days was like $600. It required that we pool our allowances together in order to purchase.

Taking the subway home I always felt like a shady criminal, weighed down with a knapsack full of math textbooks and booze.

Anyway, back to Weezer: we would sit in a circle on the carpet of my bedroom, pass the bottle and eventually sort of jump-dance on the bed in anticipation for the Sweater Song. I had sweaters that I bought in Kensignton Market because they reminded me of that song. When I hear it today, it’s like an instant time machine back to the mid-nineties that is both comical and very disturbing.

Beyond the fact that Weezer, and now Sheezer, conjure up vivid nostalgia, the concept of Sheezer is just clever and oddball enough to make me smile. Further? The band is realllly gooood! I actually now prefer Sheezer to Weezer. AND, if I was to be in a band, I’d want to be in this one. Look how much fun they have! It’s like a super cool book club but band club and specifically alt-garage fan band club: nichey-niche intense.

Catch Sheezer in Toronto TONIGHT at Ballroom Bowl . ($8 or free if you bowl first!) For those of you living between Saskatoon and Victoria, here be their tour schedule: