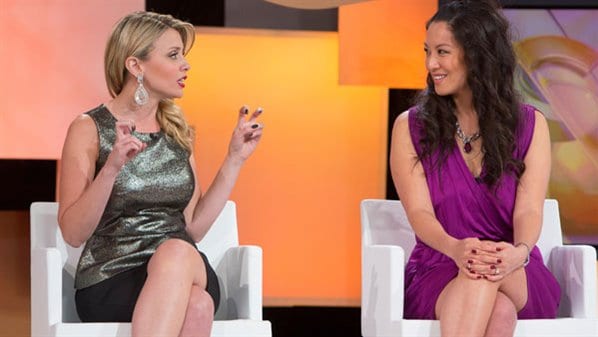 "One of my favourite stories was Prince Harry getting naked in Vegas. "

What does Lainey think about Honey Boo Boo? What story fascinated her most this year? Which celebrity does she empathize with?

This Thursday, Dec. 20 at 10pm, CTV is airing a special year-in-review show: Stars and Scandals That Shook 2012. Host Ben Mulroney and gossip gurus Tanya Kim, Traci Melchor, Danielle McGimsie, and Lainey Lui will discuss this year’s buzz-worthy moments, covering everything from Justin Bieber’s manhood to Kirsten Stewart’s affair. Shedoesthecity chatted with Lainey about her take on this year’s biggest and best celebrity moments.

SDTC: What story from 2012 will we still remember a few years from now?

Lainey: Kristen Stewart cheating on Robert Pattinson and the huge meltdown that ensued.

SDTC: Do you have any predictions about their relationship?

Lainey: I think they’re going to be okay for a while. I think part of the reason for this is that she was really, really attacked for what happened, and it was quite frightening. Not to psychoanalyze her, but I feel like as a result of that criticism she might want to cling to him.

SDTC: What was the most overrated story of 2012—something we just cared way too much about?

Lainey: I can not deal with Honey Boo Boo. But it’s not just her—I don’t want to make it sound like I’m attacking a six-year-old, that’s not the point—it’s the whole idea of watching this six-year-old and her family and laughing at them. I’m a gossip columnist; I’m pretty much, you know, on the morality scale, basically the lowest of the low. And if I’m saying that this is wrong and uncomfortable and exploitative, you probably need to check yourself if you’re supporting that kind of programming.

SDTC: Hollywood is full of fascinating people—who stood out for you this year?

Lainey: I love Taylor Swift, in the sense that I love her love life. It’s awesome; it always gives us something to talk about. Especially because she’s ending the year with such a, for lack of a better word, bang. How can the combination of Taylor Swift and One Direction not be awesome entertainment?

Lainey: To me, one of the really interesting narratives of the year has been watching Justin Bieber grow into his manhood. I’m totally fascinated by the break up and make up with Selena Gomez. Bieber is a kid who, for the most part, we’ve left alone because he’s so young and precious. But now he’s 18, and he’s going through some shit. He’s breaking up and making up with his girlfriend, he’s offending people by wearing overalls to meet the Prime Minister, he’s throwing water at the paparazzi. Are we witnessing the beginning of a Britney Spears-esque play-by-play? Or is he going to figure it out? It’s definitely something I was watching in 2012 and will continue to follow in 2013.

SDTC: What story really entertained you this year?

Lainey: One of my favourite stories was Prince Harry getting naked in Vegas. I love that so much. I mean, he’s third in line to the throne of England, which isn’t far down at all. His grandmother is the Queen, he has to sit across from her at family dinners; and now she’s going to be looking at him like, “You took your clothes off playing billiards in Vegas.” It’s really awesome. I love it so much. He’s just the scamp Prince, the mess-up Prince—his brother is perfect and so well behaved. Harry dresses up in Nazi costumes and gets in trouble all the time and says the wrong thing, and he’s just so entertaining. I never want him to change.

SDTC: Do you think William and Kate’s baby is going to be the big story for 2013?

Lainey: I think this baby is going to be all we talk about for the next nine months. Definitely.