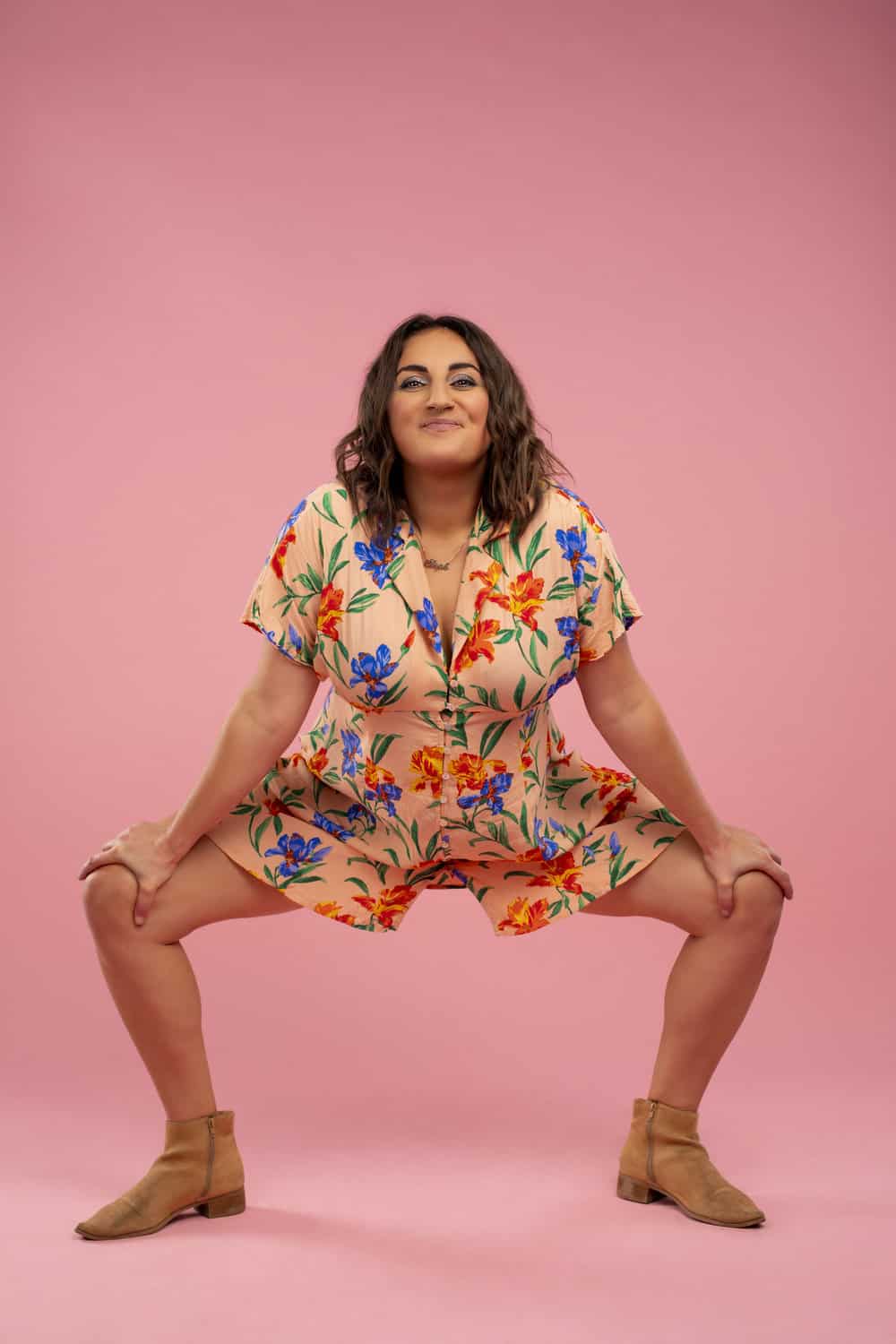 Steph Tolev is a stand up and sketch comedian from Toronto, currently living in Los Angeles. Her raucous brand of absurd and personal comedy has made her one of our all-time faves (like, nearly on the floor, laughing our guts out). She co-hosts “HAGS” at the Virgil in LA, and she also co-wrote and co-stars in the Comedy Central web series Steph & Deb with fellow Canadian comedian Debra DiGiovanni. Steph also won the Canadian Comedy Award for Best Female Stand-up and was a finalist in Sirius XM’s Top Comic.

Her latest (and wildly popular) comedy album, I’m Not Well, will be released on vinyl this month. We chatted with her this week.

ST: Oh boy! I don’t like being boring, but obviously I love the weather and the palm trees and being able to wear shorts ten months of the year. It is very nice seeing sunshine every day—you have no choice but to get out of your house. I hate how overcrowded and at times SCARY it can be. There is an app that shows you the crimes in your hood, and I made the mistake of looking at that. There was a robbery, assault with weapon and pervert on MY EXACT STREET in one day…don’t tell my parents. I also deleted the app and pretend I live on Sesame Street now.

What do you miss about TO? And what about Toronto are you not missing?

I miss being able to walk around Toronto and stop into any place and run into someone I know, I miss biking around the city, I miss my family and friends (OBVI what am I, soul-less?) and I miss being able to slip into Comedy Bar any night of the week and hang out. I am not missing the feeling of being stagnant. I felt like my career had stopped moving and I was just doing the same thing over and over.

Walk us thru a typical day in your life.

Might have to leave a couple steps out… I wake up around 8, look at my phone and get annoyed by people posting their bare ass on Instagram, so I unfollow a few people, make coffee, zip around on the laptop for a bit booking shows and attempting to get my life in order. Drag my ass on a hike with my co-host Daniel Webb where we laugh about nonsense and he makes me feel better about my bad decisions. Attempt to go to a coffee shop and write, where I spend half the time starring at people I think I know. At some point I usually have a voice-over self tape that I do from my closet where I come out MELTING and annoyed at my own voice. Back to the laptop to do actual work/meet a friend to work on ideas—either Deb DiGiovanni or Jon Schabl (both very funny Canadian comedians in LA). I make myself a dinner that’s too big for one but eat the whole thing then either do a show, or go see one of my friends. I typically end the night by seeing Juan, my taco stand lover that I will at some point marry.

Then do something VERY similar the next day. LA is just waking up, trying to come up with new ideas to write and pitch, crying a bit, being funny, tacos, then bed.

What was happening in your life when you were coming up with the material for I’m Not Well?

A LOT. It was the move to LA and the adjustment of leaving everyone, and drinking maybe a TAD too much, living with my parents before I moved, feeling very lonely and going a little COO COO on Tinder. Pretty much everything leading up to LA and the first two years after moving here.

When did you realize you wanted to do comedy for a living?

I think it was a few years after Humber College where I was serving a lot, then started doing more and more shows then realizing I had no other skills or anything to fall back on. I also loved it and started to get a few paying gigs, so I thought, hell, I could really do this!

How has your comedy evolved over the last few years?

I think it has tightened up a little bit if that makes sense. Once I moved out here, I noticed I had to be on my A-game all the time, so I made sure to add more punches and jokes to my act. I mean, I’m still a gross pig, but a pig with punchlines. I’ve also been writing way more and podcasting and doing everything else, so I think that has helped me on stage as well.

Honestly Mr. Bean for one. I watched A LOT of Mr. Bean growing up (I had the entire box set on VHS). Number two would be my family and childhood. My family is insane, in sometimes a funny way, and I Highland Danced my whole life (Scottish dancing with kilts), and I think that has made me physical on stage because it’s very rigid and constant. My family is also very blunt and honest—which I love—and I think that’s where that part of my comedy came from. They are all witty. My sister Jess is funnier than me and always will be. She’s come to JFL with me every year and impresses the industry to no return; it infuriates me, but she’s not a comic so it makes me laugh.

What are you sick of hearing about? What should we be paying more attention to?

Well, for sure Trump and every awful thing he is doing and all the mass shootings that are never ending. But these are the things we NEED to be paying attention to. I never worried about getting shot in Canada, and now every time I’m in public the first thing I do is look for an exit or something to hide behind. It’s such an insane thing to still be talking about after all these defenceless people have been killed and all these families have been ruined. SORRY TO BE ALL SERIOUS!

On a lighter note, I am sick of hearing about the Kardashians. I don’t know any of their names and don’t want to or care about anything they have ever done. No one should be paying attention to them, EVER. Pay attention to local talent. Give them attention, not these fools.

What have you learned about yourself this past year?

I have learned to love myself a little more. I am very hard on myself and try to take in my achievements more and acknowledge that I have done some pretty cool things. It’s hard congratulating yourself, especially when as a comic all you do is compare yourself to your peers, but I think about where I was ten years ago and where I am now, living on my own in LA, making my own stuff and putting myself out there to usually a pretty good response—it feels nice. I have also learned I am really bad on first dates and am a SMUDGE over the top, WAY too many act outs and use of whatever is on the table, so I am trying to scale that back and not freak every man out.

What do you hope listeners take away from your latest album?

I hope it makes them feel better about themselves and their lives. I try to paint an image of gross things but in a fun way. I’ve had women come up to me after a show and say, “I have big labia too, thanks for talking about it,” and that made me feel really good! Even if it’s one person, I made them feel less alone about their insecurities and hopefully more confident about them.

What is the funniest thing you’ve seen in recent memory?

I saw Inessa Frantowski’s album release show last week, which was amazing, and one of her bits was about how she’s really working hard on losing weight but still thinks she looks like Little Face from Dick Tracy. She DOES NOT look like this, but something about it made me laugh so hard I was actually crying. I laughed the whole drive home over it and am now just looking at it again. It’s such a hilarious thing to compare yourself to. 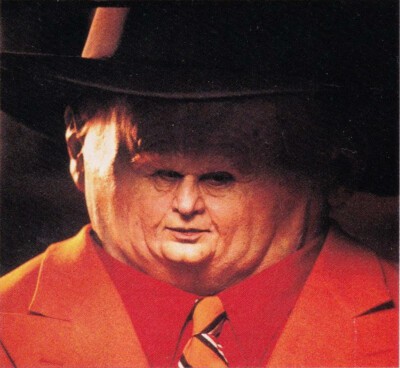