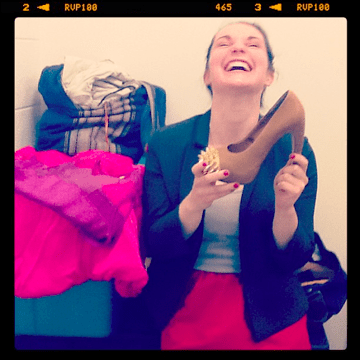 "We want to problematize the idea that the image of beauty in our society is stable and unchanging, and that anything that contradicts it is ‘alternative’ or ‘not normal’."

I enter a small office with no windows in the Department of Gender, Sexuality and Women’s Studies at York University. Ariana Elizabeth King, the current President of the club this office hosts, stands waiting for me
in a black, brown and white ensemble; a vintage brown dress, black stockings with a few ﬂaws and killer white booties. She gives me the once over and says, “I have a vintage Rodarte shirt that would look ﬂawless on you.” She digs through one of the seven large bins stacked to the brim with clothes, and pulls out a fuchsia silk and mesh Rodarte tank top with a mesh bow adorning the front of it. Indeed it is vintage Rodarte from herpersonal collection of designer goodies.

Sky Wilson, the Director of Communications for the Undergraduate Sexuality Studies Association, of which Ariana is President, is also with us in the office. She has a blonde crop ‘do with a streak of deep blue across the right side of her hair.

After a few minutes of going through the bins, we settle down to talk. Ariana sits on one of the large bins, Sky grabs a chair, and I make myself comfortable on the ﬂoor across from them.

Prima: So tell me about the event “Show Me Your Style: A Sex and Body Positive Fashion Show and Auction”

Ariana: It’s a charity event to raise money for the Wendy Babcock Bursary Award [which is explained in detail in later questions]. From Monday to Wednesday we have an entire lounge in our Student Centre dedicated to selling gently used designer clothing. We have aimed to make this event an accessible and body positive space, in that we are sharing and celebrating our different sizes and styles.

Sky: At the ﬁnal event, the fashion show on Wednesday the 23rd, audience members actually have an opportunity to be involved in the show. We like to think everyone is a star and everyone deserves star treatment. We will be encouraging our guests to join the fashion at any moment, with the clothes they’ve purchased at our sale, or the clothes they came in wearing, in order to show off their personal style and the way they express themselves. Whatever we can do to encourage and support people in feeling sexy, conﬁdent and comfortable, we will try our best to do.

Ariana: Some of our main acts are Red Herring of Toronto, Divinesque doing a special drag performance, and Clementine Morrigan doing a spoken word from her recently published book. All our models are volunteers from our own communities.

Prima: What is a sex and body positive fashion show anyway?

Ariana: We aim to encourage participation from all folks, or any gender, any sex and any expression. We hope to construct a platform of gender and shape shifting. That platform being our actual runway on which ﬂuid participation can take place; any one who wants to participate, is more than welcome to. It’s a come one, come all type of event.

Sky: Society says you have to look a speciﬁc way to be beautiful or to be a model: you have to be white, skinny, straight with big tits. We say that’s unrealistic and exclusive.

Ariana: Exactly. We want to problematize the idea that the image of beauty in our society is stable and unchanging, and that anything that contradicts it is ‘alternative’ or ‘not normal’.

Prima: Tell me about the Wendy Babcock Bursary Award.

Ariana: The Bursary Award is a $ 1, 500 Bursary to be given to anyone pursuing studies in the ﬁeld of gender, sexuality or women’s studies at York University who is working as a sex worker. It is awarded in honor of Wendy Babcock. Wendy Babcock was a York University community member. She was a law student at Osgoode and a vindicator for sex workers rights and women’s labour rights in Canada. She also worked tirelessly for the establishment of legal identities and sexual recognition within the LGBT community. Wendy Babcock worked as a sex worker to put herself through University, as well as early on in her life.

Prima: What do you hope to accomplish with this event?

Ariana: We hope to raise the full funds needed to get the award off the ground, as it is in its ﬁrst year. We also want to create a space for dialogue around sex work, education, body stylization and how they can all work together and are not necessarily isolated.

Sky: We also just want to make people feel good about themselves! We’ve placed a lot of emphasis on the accessibility of the event.

Prima: What is the link between fashion, Wendy Babcock and sex work?

Ariana: It comes down to a celebration of our bodies; the way we use them and how we dress or undress them. USSA [Undergraduate Sexuality Studies Association] is an avid supporter of sex work, as we see sex work as just another way of using our bodies for labor, not unlike working in a bar or a coffee shop. All these jobs are physical jobs. Yet sex workers are not protected with a right to safety and work.

Prima: Do you think the York University community and the Sex Worker communities of Toronto will respond well to this event? Why or why not?

Sky: We have already received some feed back and it has been overwhelmingly positive and supportive. Especially with the award!

Ariana: A lot of our friends who will be guests at this event are sex workers themselves. They are excited and supportive of this initiative. Some of them are even performing, though we won’t tell you who! If someone disagrees with us, the question is: who could be against raising money for education?

Sky: No matter what the award is going to, I think York students understand the burden of paying for tuition.

Prima: Finally, what is your goal in fundraising for a bursary geared towards supporting students who work as Sex Workers?

Ariana: That ﬁeld of labor has gone, up to the point, as institutionally unrecognized, belittled and devalued. We see it as a legitimate form of labor and it involved economic participation and interaction. Because of its devaluation, sex work as a socially unacceptable yet highly demanded ﬁeld, it is yet to attain the rights associated with ‘normal’ labour.

The interview concluded with me trying to squeeze my size nine feet into one of Ariana’s custom made Jeffrey Campbells… They were a size seven and fucking hot. (See Ariana holding her favourite shoe in the picture).

These ladies are onto something really special. Not only are they speaking out in support of sex work and sex workers rights, they are ﬁnding a sexy, fun and empowering way to do it.