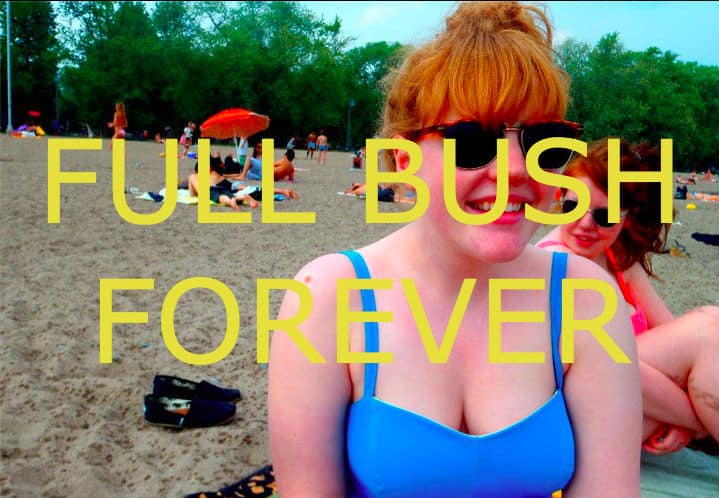 "It's like a reverse-mullet for your ladyparts: business in the back, key party in the front."

BREAKING WOMAN NEWS: We CAN have it all! At least when it comes to our pubes. Will this save us from trend pieces about “having it all” in the other aspects of life? Almost certainly not, but it will save us from having to decide between “1970s hot tub swingers” and “balder than Vin Diesel’s head” as the only two options for our underbits. One small step for woman, one very large step for women’s gines.

As soon as I read about the so-called “full bush Brazilian” in New York Magazine, I was like “me, please.” For the uninitiated, a full bush Brazilian involves waxing the bikini line and, erm, undercarriage area, but leaving the mons as hairy as it wants to be. It’s like a reverse-mullet for your ladyparts: business in the back, key party in the front. It really did sound like the best of both worlds. For a long time I’d let things run free and loved it, but sometimes you just want things a bit neater down there, y’know? The 70s were great, but so were the 80s. And the 90s. I don’t want to get into the 2000s, but the point is change is nice. I called the number one name in waxing—The Ten Spot—and asked if they could help me navigate this strange new land.

And wouldn’t you know it, the professionals were way ahead of me. Turns out the ol’ Ten Spot has been offering this service as a “bumkini” wax for years. Although the trend is not quite as popular in Toronto as NY Mag would have you believe it is in New York (or at least, Brooklyn). Stephanie, my kind, capable aesthetician, said she’d done only 2 bumkinis yesterday in a ten (10!) hour shift. I felt like a treasure trail blazer. After some quick rips and a few awkward questions from me (“Be honest, has anyone ever farted on you”), the deed was done. It was the most thorough bikini wax I’d ever received, but I didn’t feel like a naked mole rat. I knew nothing I didn’t want seen would sneak out, but I also had a friendly tuft hanging out and making its woman-inity known. It was, in short, perfect.

I have decided with this innovation in body hair maintenance that we can finally do it: no more thinkpieces about pubes. Literally do whatever you want, but let’s not stress about whether or not there’s a correct thing. To each their own. And now, for those of you considering joining me in full bush Brazil, some tips: