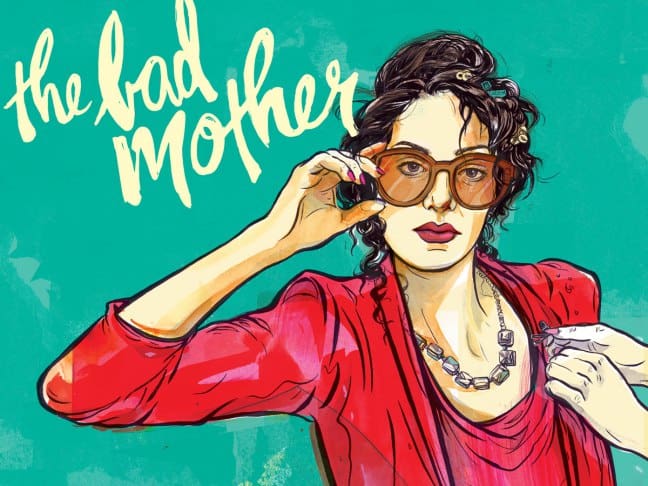 Sarah Kapoor’s “The Bad Mother” Is Your New Fave Film

Sara Kapoor’s film, The Bad Mother, is a hilarious look at the push/pull between motherhood and work and life, and how no matter which way you slice it, it’s nearly impossible to keep your balance.

In the film, Tara (played by Kapoor) is a mid-thirties woman who has to lean out of her career to take care of her kids. The lid of her frustration is blown off when her five-year-old son accidentally posts a private rant she wrote about her husband’s evil workplace to the Internet. Tara and her family must deal with the dizzying consequences that include drug cocktails, the humbling eye of her own mother, and a reunion with her ex-boyfriend.

We caught up with Sarah and asked her about the film.

SDTC: How did The Bad Mother come together? How much of it is lifted from your own personal experience?

SK: None of it’s true and all of it is true! The Bad Mother is a work of fiction. Because it’s my real family and friends acting and because I have a documentary background, I want that to be clear. I wrote the script never intending to act in the film. Acting in it was a joint choice between myself and my creative partner on this film, David James Fernandes. We were impatient and both carried the borderline insane optimism gene.

That said, the script was definitely inspired by the last decade of my life and the hopes and realities many twenty-five- to forty-five-year-old women have when (not) balancing care and earning. Most people I know need to do both and have both partners earning to give their families a decent life.

It’s also meant to have an appeal for people younger and older. Having prominent “maiden, mother, and crone” characters was part of the design. I have screened this movie in front of an audience that was largely fifty to eighty and it was incredible how they related to it based on their own life experiences. They laughed and were concerned at totally different parts though!

The film is sympathetic to the trade-offs men often have to make too. Most guys who watch the film think they’re settling into a chick flick and then find themselves laughing.

What was your education/career trajectory prior to this film?

While I was on maternity leave with my son, I was convinced I’d be laid off given a severe round of cuts. I was promoted instead. At the time I felt torn between loyalty to my baby or a demanding dream job. I chose my kid and to start my own business.

The film illuminates all of the pressures we are under as moms: we’re damned if we go to work, damned if we stay home, damned if we try to do both. Do you ever wish you had been born in a different era, where we weren’t expected to go to work?

No, I don’t wish I was born in another era. Things were decidedly worse for a greater amount of people. I also think that women have ALWAYS worked. Care is work. What’s new is the notion that it has a measurable economic value.

The burden of care overwhelmingly falls on women, from caring to infants to caring for elderly parents. What changes would you like to see happen (policy level/social level/individual level/etc) to alleviate some of the pressures we face?

Live true to your values and ideals – that changes policy. Know that you will outlive at least some of the things you can’t stand. “This too shall pass” – that has helped me as an individual when things seem overwhelming. Teach your kids to be the leaders and citizens you wish existed now – that will change society. I’m holding on to a quote from economist Herbert Stein these days: “If something cannot go on forever, it will stop.”

What did you learn about yourself over the course of making this film?

Ask me after the next film! This is my first feature and I feel like I’m still in the steepest part of the learning curve on. I really have come to see this film as a real-world degree. That’s been the real learning, I suppose. Your first film will take twice as long as you think it will and despite many moments where it seemed impossible, I’ve learned that I’ve got what it takes to get to the finish line.

The Bad Mother is out on DVD and VOD on Aug. 1st. More info. here.