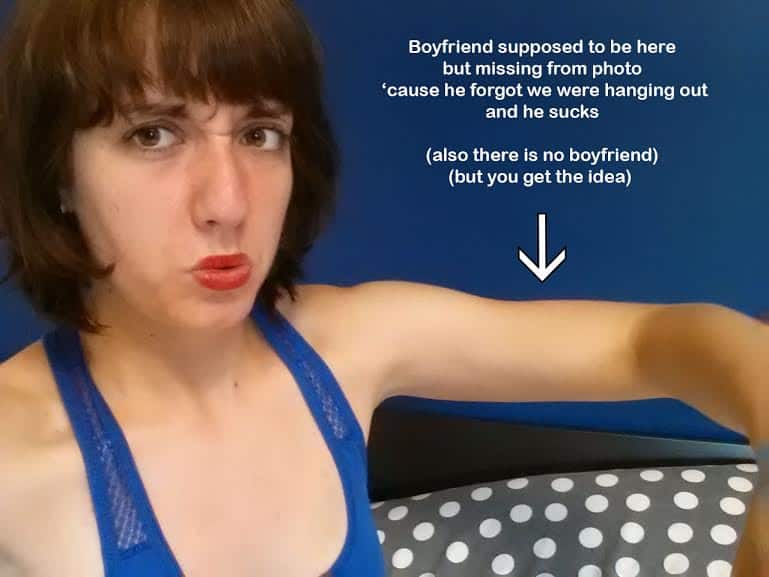 This is a public service announcement. Our society’s dating/loving/boinking standards are at an all-time low. We’ve become “totally super cool” with relationships that feature jerks, turds, antichrists, and people who “see” Facebook messages but do not respond ‘cause they’re not ready to have a baby with you and they assumed that your greeting of “Hey! How are you?” implied that you just purchased three cribs. I hear more and more friends saying things like “Yeah, I haven’t seen my boyfriend/girlfriend in five weeks even though we live in the same city and both work 9 – 5 jobs but you know… they’re busy with… stuff…. and… I’m okay… with… that?” Quick piece of advice. YOU ARE NOT OKAY WITH THAT. WHO WOULD BE OKAY WITH THAT? More importantly. WHY DO YOU THINK YOU ARE OKAY WITH THAT?

I know why! We live in a culture that promotes self-involvement, self-importance, and self-douchebaggery to the point that some individuals feel it’s acceptable to treat the ones they “love” like an allergy they can only tolerate during certain seasons and thus we accept it too. But we are not hayfever, people! We are sentient beings who feel emotions and have needs that are 100% valid. Also, get this, the word “need” is not a negative one despite what certain hip publications might like to tell you.

Interesting fact: the reason that bum who was incredibly interested in you but now disregards your existence even though they “still enjoy your tweets” originally asked you out is because they have needs too. No one on this planet is above needing and it’s completely fine to have needs, especially the below list of BASIC ones that your partner/significant other/casual humper should be fulfilling at a minimum. If these are not being met for the love of god run like Julia Roberts in that movie where she’s always almost getting married and running a lot. That person stinks like the worst gym teacher’s B.O. and you can absolutely find someone better, even on Tinder/hell on earth.

They need to talk to you
This one is kind of necessary for your relationship to NOT be a figment of your imagination, yet folks still have to be reminded that communication is the key to… communication. Not knowing if the person you call “soulmate” is dead or alive indicates that there may be trouble in paradise. And I’m not referring to people who are blowing you off or no longer have a yearning to sex you. I’m talking about people who fully intend to continue dating you without speaking much. The people who reply to your text from twelve days ago with “Sorry, it’s been a crazy couple of weeks and continues to be so we’ll talk when I have spare time/I’m done catching up on Game of Thrones. PS you are my everything.”

They need to hang out with you in real time
Another necessary one unless you define “relationship” like Joaquin Phoenix does in Her. You definitely don’t want to date a Twombly, although you probably have before. You know, the kind of person who has long, in depth conversations with you every single day on Gchat but they’re rarely available to meet in the flesh. They’ve got a lot on their plate, and seeing you would require extensive travel that they simply can’t handle right now, even though they live three blocks away from you. Don’t tolerate this nonsense. You deserve more than Scarlett Johansson’s husky, disembodied voice did. We all do.

When in real time, they need to touch you
Unless you’ve come down with a recent bout of leprosy your BF/GF should probably be into, you know, engaging with your tactile body. Not everyone is a fan of PDA, which is understandable, but I know couples who barely give each other awkward hugs in private. Cuddle, tongue, caress, canoodle, grind, intercourse, bump uglies—hell, bump the good, the bad, AND the uglies, Clint Eastwood styles. It is not copacetic for your so-called love to say “I’m not in the mood to kiss you hello for 2 seconds so back off.” There should be some level of intimacy between you or else you’re just two good buds who sleep in the same bed occasionally and who strangers continually mistake for siblings (WHO’S BEEN THERE? ME. I HAVE).

They need to provide you with orgasms, or at least give it their best effort
The touching we just discussed should, ideally, lead to orgasming. Again, a common complaint I hear from friends is that their partner has no interest in pleasing them and they have somehow been convinced that this is the norm. Well, let me tell you, it is slowly becoming the norm, but that doesn’t fucking make it A-OK. They don’t want to get you off but expect you to consistently get them off? Nuh-uh. Not kosher. There should be equal rights, always and forever, in all areas of your relationship. I used to be hunky-dory dating dudes that didn’t give two shits about satisfying me sexually ‘cause I didn’t know any better but, boy oh boy, have those days passed! If you want admission to the Jess Beaulieu theme park you better be prepared to take a long bus ride downtown ‘cause that’s the only way you’re getting there, and by downtown I mean oral sex and by oral sex I mean EXTENSIVE oral sex.

They need to ask you about your life
There is a huge difference between them conversing at you and conversing with you. I find often that the “pillow talk” I participate in is rather one-sided. We’ll chat in detail about what’s up with one naked individual in the bed but the other naked individual is not asked about how THEIR (naked, individual) week has been. If you find that your significant other doesn’t know where you work, what your parent’s names are, or if you like eating food, yet you seem to TALK ALL THE TIME, they’ve probably never inquired about the happenings in your life and they are undeniably a big old buttface.

They need to not keep you a secret
Haven’t met your boyfriend/girlfriend’s family? Haven’t been introduced to a single one of their friends? Haven’t been brought to any work functions? But you’ve been dating for five years? Yes? Hmm. To put it lightly, that is a tad fucked. Like, Mr. Rochester locking his wife Bertha in the attic fucked. Believe me, you don’t want to be Bertha. Your paramour should be honoured and proud to hold your hand in public and if they’re not… see yuh later! If you’re at a party, they shouldn’t be pretending like you’re a stranger, unless it’s a kinky role playing game and in that case GO FOR IT AND BUMP ALL OF THOSE UGLIES AFTER WHY DON’T CHA.

They need to be able to discuss issues with you like an adult
You want to have sex and hang out and participate in a relationship? Then you better be prepared to have some rational, grown-up fights, squabbles, arguments, debates, disagreements, and thumb wars. If they can’t handle a conversation that may get heated and may involve real emotions, then they’re also not ready to experience great happiness or share in great happiness with another, and you deserve someone who is ready.

They need to make you feel good
Whatever that means for you. Maybe you like career support, or sweet compliments, or stellar joke telling, or dark intellectual stimulation, or killer crab cakes. If your sweetheart makes a crab cake that fills you with deliciousness and makes your eyes twinkle, then right on. Eat your heart out. Shove as many crab cakes as you can into your tender little mouth (not a euphemism, I just love crab cakes). Bottom line: they should bring you JOY in some form or another. If all they do is make you feel like dirt, bring you down, and criticize you, then move on sista/brotha. There areoptions elsewhere.

“DON’T SETTLE FOR ANY LESS, HEAR ME? ARE YOU EVEN LISTENING JESS?” – my mom

CONTEST: We’re Giving Away Tickets For The Miss Misery Screening at The Royal!