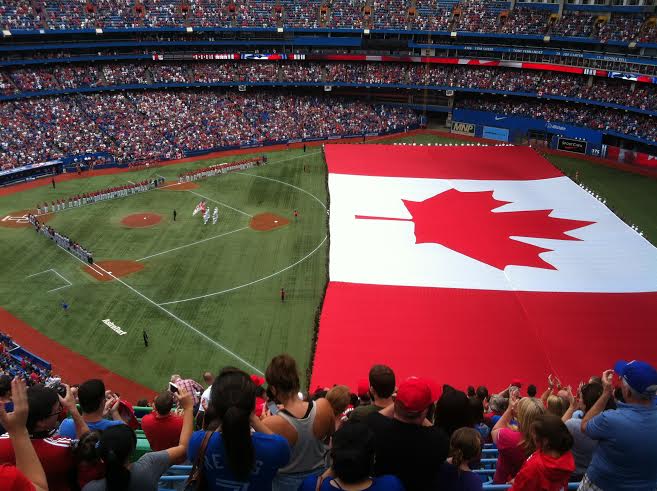 "Do not get up or go to your seats or decide to stretch your legs when the ball is in play. Let me repeat this. DO. NOT. GET. UP. AND. BLOCK. SOMEONE'S. VIEW."

May was a pretty amazing month for the Blue Jays.

Individual successes include Edwin Encarnacion hitting 16 home runs, tying the legendary Mickey Mantle for the all-time American League record in the month of May. And as of June 1st Mark Buehrle became the first MLB pitcher to reach 10 wins. Collectively, the boys in blue had a 9-game winning streak, are in first place in their division, and they’ve been playing some really exciting baseball. Now that you can distinguish which butt belongs to who on the field, you’re ready to go all the way. It’s time for you to see with your own two eyes, in person, the thickness that is the Toronto Blue Jays. Before you go falling in love with these boys (I can guarantee you will), here are some crucial dos and don’ts of going to see a live game.

DO be excited! You as a spectator have one job and it’s very easy: cheer for your team! While the crowd’s energy, or lack thereof, might not necessarily make the team play badly, you’d be nuts to think that a rowdy and excited crowd doesn’t amp up the players. Also why are you going to a game if you’re just gonna sit there bored, silent and umoving? Just stay home and save yourself the asthma-inducing trek to the nosebleed section.

DON’T get up in the middle of an outing. Do not get up or go to your seats or decide to stretch your legs when the ball is in play. Let me repeat this. DO. NOT. GET. UP. AND. BLOCK. SOMEONE’S. VIEW. DON’T GET UP IN THE MIDDLE OF AN OUTING. Don’t do it. Have I made myself clear? Because if I’m sitting behind you and you just couldn’t wait 2 minutes to get a footlong hot dog and you made me miss an incredible diving catch by Lawrie that showed his ample butt in action, so help me, I will set you on fire. STAND DOWN. 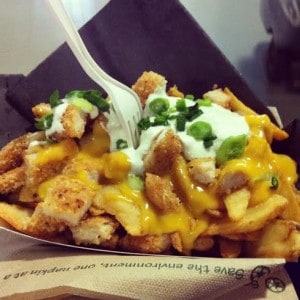 DO eat yummy foods. Everyone, I’d like to introduce you to one of the loves of my life: the Wedge & Wing Poutine from Quaker Steak & Lube in Section 134. This monstrosity is potato wedges and breaded chicken bites smothered in blue cheese dressing and nacho cheese. And some chives to make you feel a little bit better about your choices. DON’T, however, look at the nutritional information for this because your sobbing will likely trigger the asthma you developed after climbing your way to the 500s. Also, hot tip: You’re allowed to bring food in with you! I once brought in a burrito bowl from Chipotle and it was the best decision of my entire life until I got black bean and guac toots. The Skydome employees will check your bag and probably sniff your opened bottles of water to make sure it’s water, but if you’re on a budget, pack a lunch and save dat skrilla.

DON’T bring a big bag. Seating can be pretty cramped, so maybe think twice about bringing your huge yoga bag.

DO smile and make friends with the babies in your vicinity. Because they’re babies, duh, they need constant attention and stimulation that their baseball-loving parents might not be giving that exact second. So make friends with a baby and make a silly face. DON’T, however, touch them. You’re not allowed.

DON’T take chirping too far. The very official UrbanDictionary.com defines chirping as: “The process of talking large amounts of shit towards stupid individuals.” Chirping at a sporting event is expected because people feel passionate about their own teams. It goes hand-in-hand with cheering loud and proud, so I support it… as long as the chirping is in light-hearted fun and directed towards the team, not personal attacks on fans of the team. See the diff? If I wanna boo that shitty cheater Alex Rodriguez of the New York Yankees (which I can’t because he’s got a million game suspension for BEING A CHEATER), it is my right as a fan. However, it is NOT your right, Shitty Yankees Fan In Front Of Me, to take that personally and then lash out on me and call me a “fat whale” because your team was losing. People can get heated at games, and they’re allowed to, but if you think that gives you an excuse to be mean to people for NO REASON OTHER THAN THEY’RE NOT CHEERING FOR YOUR TEAM OF DICK WIPES, you can join those fart eaters who block people’s view by getting up in the middle of outs in the fiery bowels of hell as far as Ann Pornel is concerned.

DO participate in the Seventh Inning Stretch. You’ll welcome the movement and it’s a baseball tradition! While we’re at it, sing that national anthem, man. The words are right there.

DON’T start the wave when your team is at bat. The point of the wave is to serve as a distraction to whoever is at bat. Wait till it’s the other team’s turn and go nuts.

DO dance to the players’ walk-up music. (Most of) Our Jays have excellent taste in music and have picked great songs to accompany them as they walk to the plate. We’ve got a hilarious mix of hip-hop, reggaeton and country music to groove to. That’s what happens when your team is equal parts spicy Latino men and good ‘ol southern boys. So duhty wine like Bautista is watching, but please do it seated, because what the eff did I say about standing up and blocking people’s views?

DON’T be afraid to make friends around you, especially if they’re cheering for the same team as you. You already have one thing in common to chat about, why not make a friend or two? Unless they’re Yankee’s fans. You know how I feel about that.

DO respect your fellow spectators. Everyone paid money to be there and everyone’s entitled to have a great time, but never at the expense of other people. Be cool, man! It’s a baseball game. Relax. Have fun!

Now that you know the basics, it’s time for you to spread your wings and fly, fly away straight to the glowing sun (Adam Lind’s categorically perfect butt). The boys of summer are HOT right now, so why not jump on the band wagon? There’s plenty of room (surprising because of all the space being taken up by booty, booty, booty, booty rockin’ everywhere), as long as you’re not an asshole. If you are—or worse, you’re a Yankees fan—stay home and leave the fun and good times to cool dudes. Go Jays!