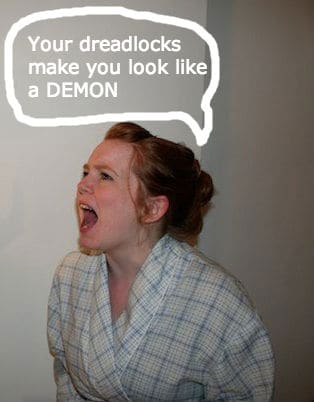 "At 27 years old, I am only just beginning to understand what it means to be in a functioning relationship with another human being."

The Dumbest Reasons Allana Has Fought With Boyfriends

I got into a very silly fight with my boyfriend this week, and after realizing that I participated in at least 50-75% of the creation of that argument (if not more), I started thinking about the reasons I’ve gotten into arguments with boyfriends in the past. I am a passionate lady with a hair-trigger temper and an inability to do anything but call it like I see it, and my perspective is often influenced heavily by my emotions (gentlemen, start the line outside my workplace). I am often dismissive and judgemental one minute, then completely understanding and level-headed the next. I don’t pretend to understand it, and neither should you (but really it’s probably best to form two separate lines, one for immediate marriage proposals and another for “let’s see where this goes, but I’m definitely interested, you sound fun.”)

At 27 years old, I am only just beginning to understand what it means to be in a functioning relationship with another human being. Honestly at any point prior to this age I was just pretty stoked to have someone to have sex with on a regular basis (still am, but I now also consider other adult things like “feelings” and “schedules” and “do either of us already have a boyfriend or girlfriend”). In any case, I have had boyfriends for 98% of my adult life, and have rarely ever been single (although if you’re interested I have a long and passionate rant about how I was really, basically, technically single in a few of those relationships). That being said, I have learned from many ridiculous, mood-influenced arguments over the last ten years with various boys/men/boys2men.

His Impromptu Dreadlocks Made Him Look Like A Demon
My first serious boyfriend came home one afternoon with his hair twisted and knotted into tiny spikes all over his head, claiming that they were “dreadlocks.” Dreadlocks! His hair was neither long enough or thick enough to warrant this kind of hairstyle, and I could do nothing but bemoan the idea that I’d now have to be seen in public with a person I was already starting to secretly lose interest in. Eighteen year old me was devastated to be sharing a bed with a person who so closely resembled a gremlin. After a lengthy, tear-filled fight in which he stood his ground about his dreadlocked decision (rightfully so, for the record, although he did really look like a goddamn gargoyle), we agreed upon a rule: no sex without a toque. It’s called maturity, read a book.

He Sang A Song Called ‘Love Is Shit’ In Front of A Packed Audience
Not being able to write music because it’s “impossible to write when I’m happy, baby,” this particular boyfriend told me for the first 5 or 6 months of our relationship that he could never tell me he loved me, for fear that it would make him too happy. As a twenty year old girl, what bigger compliment could there be, really? The answer is no bigger compliment than standing front row at a concert, watching your boyfriend play a song called “Love Is Shit.” This was followed by a fight on the street in which he told me he loved me, and then immediately “took it back.”

He Needed to Live in Squalor To “Be A Better Artist”
I’ve actually been told this by several different boys at different points in my life, but the first time I was presented with the idea that one could manufacture their own strife, I thought it was equal parts hilarious and distressing. I have never had the urge to live anything but comfortably, and while I was thrilled to hear that this particular boyfriend had finally set an achievable goal for himself, I felt the need to push the alternative on him. I do believe this argument ended with him calling me a Corporate Whore and me telling him to “go hug a tree.” You won’t see dialogue better than that in any movie. #art