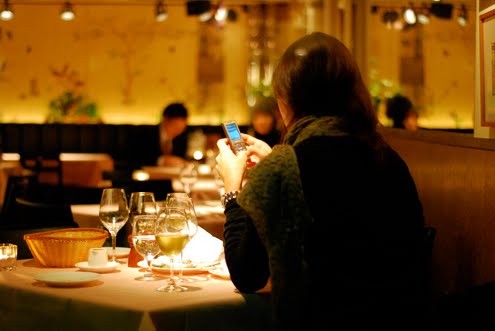 The Fear Of Being Seen Alone

Being alone = Being a loser

…or at least that’s what I used to think. For a solid 20 years of my life I was absolutely horrified at the idea of being seen alone. Waiting in line for the movies before your friends had managed to show up? Eating alone in the university caf? Grabbing a coffee from Tim Horton’s?

It was with someone or it was not at all.

From a very young age I wanted to be constantly surrounded by friends. If I always had a sidekick, people would know I was cool–and this, ultimately, was the dream. I took this really, embarrassingly far. I mean, if I had to walk home from school by myself I would cut through this alleyway behind the church so no one would see me walking alone down the street.

I vividly remember standing in the shower one Wednesday morning when I was in grade 9, knowing I didn’t have any plans for the upcoming weekend and feeling an overwhelming sense of anxiety. I couldn’t be seen walking home ALONE from school on Friday night. People would think I was a loser with no fun plans to look forward to. I walked into school in this panicked fog, desperately approaching all of my friends to find a way to be included in their weekends.  It was exhausting, and it was weird. But I was 15 and confused and figured if I wanted to be accepted I needed someone by my side. Always.

It wasn’t until I went off to school and started to really figure out who the fuck I was that I began to understand that being alone didn’t make you a loner. In fact, it didn’t make you anything. It just happened. You’d inevitably take a different bus to campus than your roommates would or you’d have time to kill before class and sit solo with your tea and textbook in the common room. It happened. It happened to you and him and her. You realized you never judged anyone you saw for standing by themselves waiting for the bus. It dawned on you that they likely weren’t judging you either. You were merely standing alone, and life went on.

Then I graduated. I grew and changed. I read books and drank beer and loved this guy so much that I still think of him on his birthday every year. I packed and I moved and I packed again and I moved again and I spent $150 on a pair of shoes I have never worn once. I fell into my life and fell into myself and being alone was no longer a thing I feared or even a thing that just happened; it had slowly become something that I needed.

After years of feeling vulnerable and insecure, I realized I was completely in love with who I was–and in falling for myself, being alone suddenly became liberating. Writing by myself on a Sunday afternoon at that coffee shop became the best part of my week. Running alone on the boardwalk while the sun came up was freeing (er, this happened once, but it was damn beautiful). Drinking that beer and reading the paper while I waited for my friend to join didn’t faze me. It was actually kind of nice.

My relationship with people has changed so much since that panicked high school morning. I mean, I love people. I love talking to them and learning from them. I love the way you feel when you meet someone who just gets you and you know they came into your life for a reason.

I love so many people in my life. I genuinely miss my coworkers after a weekend and write emails to my family because I need to know their opinion of how that book ended. I absolutely am who I am because of these people. But the other side of me is who I am because of myself. And I think it’s very lovely to embrace that other half; to recognize you are the fucking best. And sometimes you just need to spend some QT with yourself.