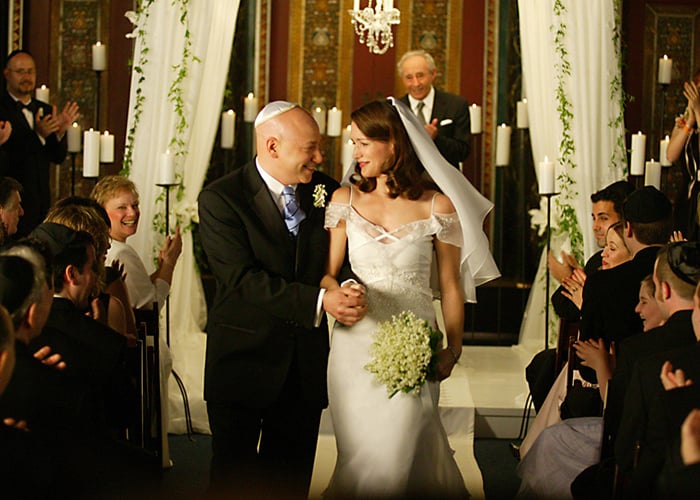 The Feminist Wedding Diaries: I Love My Fiancé, but I Would Never Convert Religions for Him

My fiancé is Jewish and I’m not. Neither of us is particularly religious, and most people who know us know that.

I myself was raised nominally Anglican. As a child, my largely secular parents took me to church approximately 1.5 times a month. While I was not super devout, I did enjoy the sense of community, and approval of the Anglican Church’s liberal values. Plus, I love Christmas carols. I’m not exactly into Christian dogma or theology, but Christmas carols are one of my three favourite things. They’re right up there with red velvet cupcakes and photos of Zac Efron without his shirt on. All in all, I like being nominally Anglican, and I have no plans to stop.

Some folks, however, are straight up concerned about my decision to not convert to Judaism for my future husband. Interestingly, none of these people are Jewish themselves. Nonetheless, they seem to think my not being a Semite is a barrier to the success of my marriage.

Truth be told, I’m sick of the gendered double standard that, when a man and a woman from different faiths get married, everyone expects there will be a religious conversion, and that the woman is the one who’ll convert. Yes, this expectation is derived from the simple fact that religion has historically been passed down from mother to child, but it’s 2016: surely we can get past the idea that marriage is always for reproductive purposes, or that faith is somehow passed on to a fetus in its biological mother’s womb.

While I have been asked if I plan to convert innumerable times in the months we’ve been engaged, do you know how many people have asked my partner if he has plans to change his religion for me? Zero. Because no one expects a man to change who he is to get married.

Being quizzed about conversion is a nuisance, but it’s not a new thing for me. It’s been happening since before we were even engaged. At my father’s 60th birthday, a friend of the family, who is Roman Catholic and knows basically nothing about the Jewish faith, interrogated me while drunk on Chardonnay. My partner and I had been dating for a year and a half. Worried I might be wasting my childbearing years, she demanded, “Sarah, are you sure this boy you’re dating will marry you? Are you sure his family is okay with you not being a Jew?” When I said, yes, that my boyfriend and his parents had no problem with me celebrating Christmas and Easter, she just scoffed.

As our relationship continued, people became more and more intrusive on the topic of religion. When we finally decided to get engaged, some of our acquaintances outright assumed I had already started the conversion process. The truth is, I find it deeply troubling when individuals project a lack of acceptance for my religious differences onto my future husband and his family. Why is it so hard to believe it’s possible for him to love me for who I am, and not the person I could be if I converted? Just as I would never dream of asking him to become Anglican, my fiancé respects me enough not to demand I alter myself to be more like him.

Of course, there’s always that argument that I should convert because, if we were to reproduce, things would be confusing for our children; however, I reject that argument. First off, not everyone who gets married goes on to have kids. Secondly, as a feminist, I believe my partner is no less capable of instilling religious values in a child than I am. If we had progeny who self-identified as Jewish, I would be very supportive of that. At the same time, I see no reason why I would need to devote hours upon hours of my life to officially converting. My fiancé is already Jewish and knows how to socialize a person in his faith.

Having said all this, does it mean I respect his Jewish heritage any less because I am choosing to not convert? No, I am fascinated by Judaism, and I actively seek to know more about it. While I am not a very spiritual person, I think it is a beautiful faith with an important history and a rich culture. But I do not have to change myself to love and respect every part of my partner.

At the end of the day, I promised myself I wouldn’t change any part of who I am to get married. That means no spray tans, no crash diets that leave me frail, and no religious conversions. So please, stop asking me if I’m going to change religions for my fiancé. He doesn’t expect me to, so why should you?