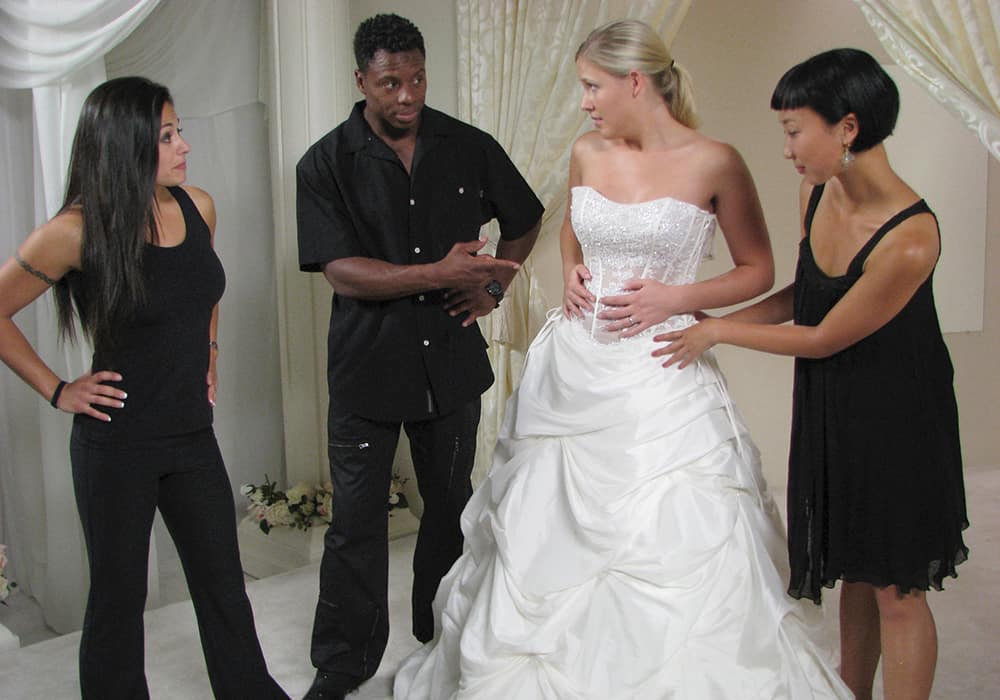 The Feminist Wedding Diaries: Stop Asking Me If I’m Losing Weight For My Wedding

I have absolutely no plans to lose weight for my wedding. Like most human beings, my weight fluctuates. Every once in a while, I do make a focused effort to develop more muscle mass or improve my overall fitness level. This process usually happens when I’ve had an uncharacteristically sedentary period, because of an injury or a bad cold chest cold that refuses to die.

Like many people, I work out regularly, try to eat fruit with breakfast, and have forced myself to develop a taste for green juice as a snack. All this, however, is something I do for myself, because it helps my body accomplish everything it needs to in a day. I do not take care of my body as part of a quest to meet some mythical “goal weight.” Yet, despite the fact I am not particularly concerned with dropping dress sizes, since becoming a bride-to-be, everyone expects me to be.

While I was privileged to have a thoroughly feminist education, I’m not so naïve that I don’t realize the world puts a huge amount of pressure on women to be skinny. For women who are engaged-to-be married, this pressure only increases. I first became aware of the heightened body policing of engaged ladies in my early 20s, when I was bored, living with my parents for the summer, and Netflix had yet to create its online streaming services. With little else to do, I developed a perverse fascination with a Canadian reality show called Bulging Brides. It was about women who were deemed “too fat” to get married. Each episode’s formula was the same: While trying on her wedding gown, that week’s bride would be ambushed by a personal trainer named Tommy and a nutritionist named Nadeen. Tommy and Nadeen proceeded to fat-shame the woman, saying things like, “Anita looks like a chubster in that dress!” Then they would deprive the unlucky woman of food and force her to work out until she cried.

The whole show was predicated on the notion that, apparently, no one over 150 pounds deserves to get married. It was Canada in 2008; gay people had had the right to marry for a few years by this point, but marriage equality for non-skinny women was very controversial. Regrettably, not much has changed.

While Bulging Brides has since been cancelled, the expectation that women should become the skinniest versions of themselves when they tie the knot has not. I know this for certain because that sort of pre-marital body policing happens to me all the time. Over the past few months, I have noticed people scrutinizing my body with complete abandon. My body gets stared at and assessed by (so-called) friends and (certain) family with the intensity of a dozen drunken frat boys catcalling ladies at da club. It’s a feeling so violating it makes you want to take a shower.

Being engaged, I’ve noticed that food choices become more political than ever. For example, about a month ago, I was at an event offering free cookies. Now, free cookies are lovely. I love cookies almost more than I love a really fast Internet connection. I probably love cookies more than Sesame Street’s Cookie Monster does. Having said that, I had consumed a snack not 20 minutes before arriving at the meeting, so I decided to pass on the treats. Naturally, I wanted a cookie, but there was no room in my belly for one. However, when I eschewed the chocolate chips on offer, the friend seated nearest to me immediately pounced: “Oh, I guess you have to be careful what you eat these days because of the wedding?” It was that pointed. Whatever I eat or do not eat is assumed by onlookers to be connected to a day nine months in the future, when I’ll walk down a makeshift aisle at a midtown hotel.

It’s not just what I eat. I’ve also been the recipient of a veritable bevy of unsolicited workout advice. After mentioning to an casual acquaintance that I did not think a sleeveless wedding dress would be flattering on me, said person jumped in to offer this pearl of wisdom: “You should hire a personal trainer to reshape your upper arms!” Yes, because the solution, rather than finding a dress that looks nice on my body, is to change my body. Ew!

Of course, I am far from the only person I know who has experienced wedding-related body shaming. The pressure to be one’s skinniest while saying “I do” afflicts pretty much everyone to whom I’ve spoken. Even my friend Judith, a professional yoga instructor who is one of the most toned humans I know, was the target of bridal body shaming. When getting fitted for her wedding dress, her seamstress snarkily assured her she could “let it out,” as though letting out a wedding dress is some sort of shameful process that proves a woman has failed at being a bride.

From what I can tell, the world seems to believe only svelte women are entitled to wear a white dress, eat rubber chicken, and watch their drunken Uncle Jim give a cringe-inducing, racist speech at their wedding. But I reject that notion there is only one body type worthy of being a bride. Whatever your size or shape, no one deserves to be body shamed while preparing for a life-altering event. No one should be told to lose ten pounds, pad their bra, get their teeth fixed, etc. Getting married is about the process of legally committing yourself to binge watching TV on the couch with the same person for the rest of your goddamn life, not committing to a strict diet and workout regimen that would terrify most Olympic athletes.

Ultimately, I believe my wedding shouldn’t be reminiscent of the bathing suit competition at the Miss USA pageant. We need to get over the idea that there is an “appropriate” way to look in a wedding gown. I for one would like to see the world replace bridal body policing with an appreciation for bridal body diversity. And while we’re at it, a world where body diversity is appreciated in general would also be en point.

So, if you happen to see me eating a cookie – or not eating a cookie, for that matter – please keep your thoughts to yourself. Yes, I’m going to be a bride, but my body is still none of your business.