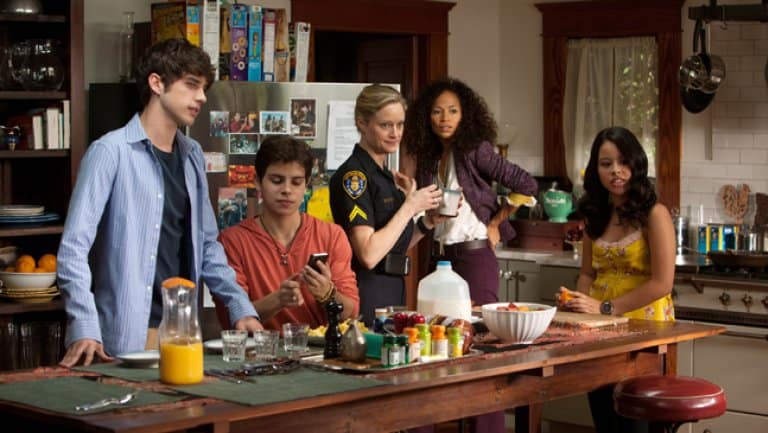 Whenever anyone asks what my girlfriend and I are watching these days, my eyes go a bit squinty and my gestures get squirrelly. I pull the asker into me, glance around to make sure no one is secretly eavesdropping, and then I whisper to them softly, “The Fosters.”

If you haven’t had the pleasure yet, The Fosters is an ABC Family show that is half heart-warming family drama, half teen soap, and full-bore ridiculous. As I can never get enough of telling people – if you only need one reason to watch: Rosie O’Donnell is on it and she plays a straight person. If you need another: the show was produced by J-Lo’s production company, in part because she has a lesbian auntie. Every time I repeat that fact I am legally obligated to wipe away a little queer tear, sincerely. As if J-Lo hadn’t done enough for gay people with her music and her perfume lines.

The very premise is like catnip to us: a lesbian couple who are foster parents (and their last name is also Foster) struggle with their half dozen foster teens, and one of the foster moms looks like a younger Jodie Foster. At the conclusion of every episode, my GF and I turn to each other and say, “Gee, those Foster moms never catch a break!”

The show was created by two gay men and it reeks of it. This show has as much bearing on real life lesbian couples as American Horror Story: Asylum had on the mental health system. The only sex happening in the Foster house is all the illicit hooking up between various foster-Fosters with each other or their classmates. The moms occasionally make a reference to something vaguely lesbianish but generally are too busy with their unending emotional labour and labour-labour (one’s a cop and one’s the vice-principal of the kids’ school) to ever do anything even remotely queer. They don’t even have time to watch whatever the Fosters’ universe version of The Fosters would be. (“The Adopters”?)

The show does it right in a few ways; the family features a diverse collection of birth kids, adopted kids and foster kids, of different ethnic backgrounds and sexual orientations. These points feature a lot into various plot turns on the show. The fact that one of the moms is black is addressed often and in very nuanced ways, especially for “family TV.” Likewise, two of the kids, Mariana and Jesus, have a birth mom who is a recovering addict and the approach the show takes is played with realism and empathy. The show also explores Mariana’s growing relationship with her Mexican grandparents, and struggles between their faith and her moms’ sexuality. One character struggles with their own sexuality in a way that gives the character lots of breathing room. Kudos, The Fosters!

One character, the eldest son Brandon, is the absolute worst. I have yet to meet anyone who doesn’t hate him. A special option for the DVD should be “Brandon-Free” watching, where all of his story lines are cut out. Additionally, some really weird contract stuff must have been going down over the seasons. One character, Jude, disappears for over half of each season, always with vague excuses like, “He’s away camping!” or “He’s off at summer camp!” Another character (no spoilers) disappears for the whole third season, only to come back at the end of the season replaced with a completely different actor. What?

The Fosters to us is kind of like The L Word – terrible, but we can’t look away. Because where else are we going to see adult lesbian relationships play out? Umm, DVDs of The L Word? That one season that Samantha on Sex in the City was gay, kind of? I think that might be it. Until we have more to choose from, The Fosters (recently renewed for a fourth season!) is going to have to be our not-so-dirty, not-so-secret guilty viewing pleasure. Boy, I wonder if those Foster moms are ever going to catch a break and have sex? I guess I’ll just have to tune in to find out.