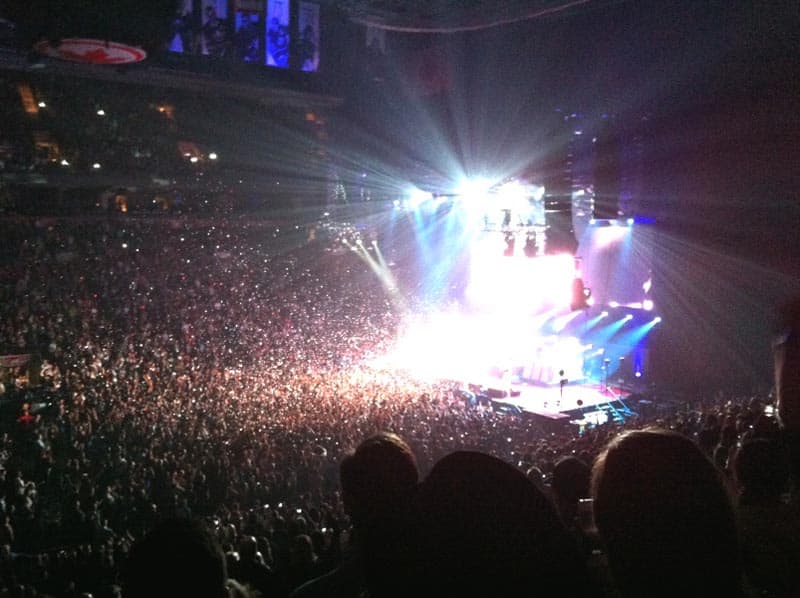 The Killers take us back in time at the ACC

There are certain bands that came along at a very influential time in your life (your teenage years, most likely) that will forever hold a special place in your heart. The Killers are one of those bands for me.

I was 17-years-old when Hot Fuss came out and it changed everything for me. Up until that point, I was either listening to classic rock that my dad had introduced me to (the good) or emo (the bad). Then the Killers and their cohorts came along in a sort of indie revolution and I had all this new music to call my own. I can still remember driving with friends to the mall to buy Hot Fuss on CD and then blasting “All These Things That I’ve Done” as we drove home.

On Wednesday, the Killers played the Air Canada Centre in what was both a nod to their new album, Battle Born, and the songs that got them there – which meant that I got to relive 2004 in all its glory. The band opened the show (which had been rescheduled from a December date due to Brandon Flowers’ laryngitis) with “Mr. Brightside” and the house lights still on, bringing every person in the ACC to their feet. (Which meant it was nothing like their performance on The O.C. Remember this?) The rest of their hour-and-a-half show was played with the lights down (save for a few fireworks) and included songs from across all four of their albums plus covers of “Shadowplay” by Joy Division (one of the best I’ve heard), “I Think We’re Alone Now” by Tommy James & the Shondells, and “Lovers in a Dangerous Time” by Bruce Cockburn.

The crowd favourites were the ones you would expect – “Smile Like You Mean It”, “Somebody Told Me”, “All These Things That I’ve Done”, and the encore of “When You Were Young” – but people were on their feet and singing along for every song. The band was obviously enjoying themselves and does arena rock well; Flowers as the charismatic frontman working the crowd while the rest of the band rocks out. Lines that resonated with me some eight years ago (“I got soul, but I’m not a soldier”) still do and when they’re accompanied by falling glitter, well, it’s a good night.