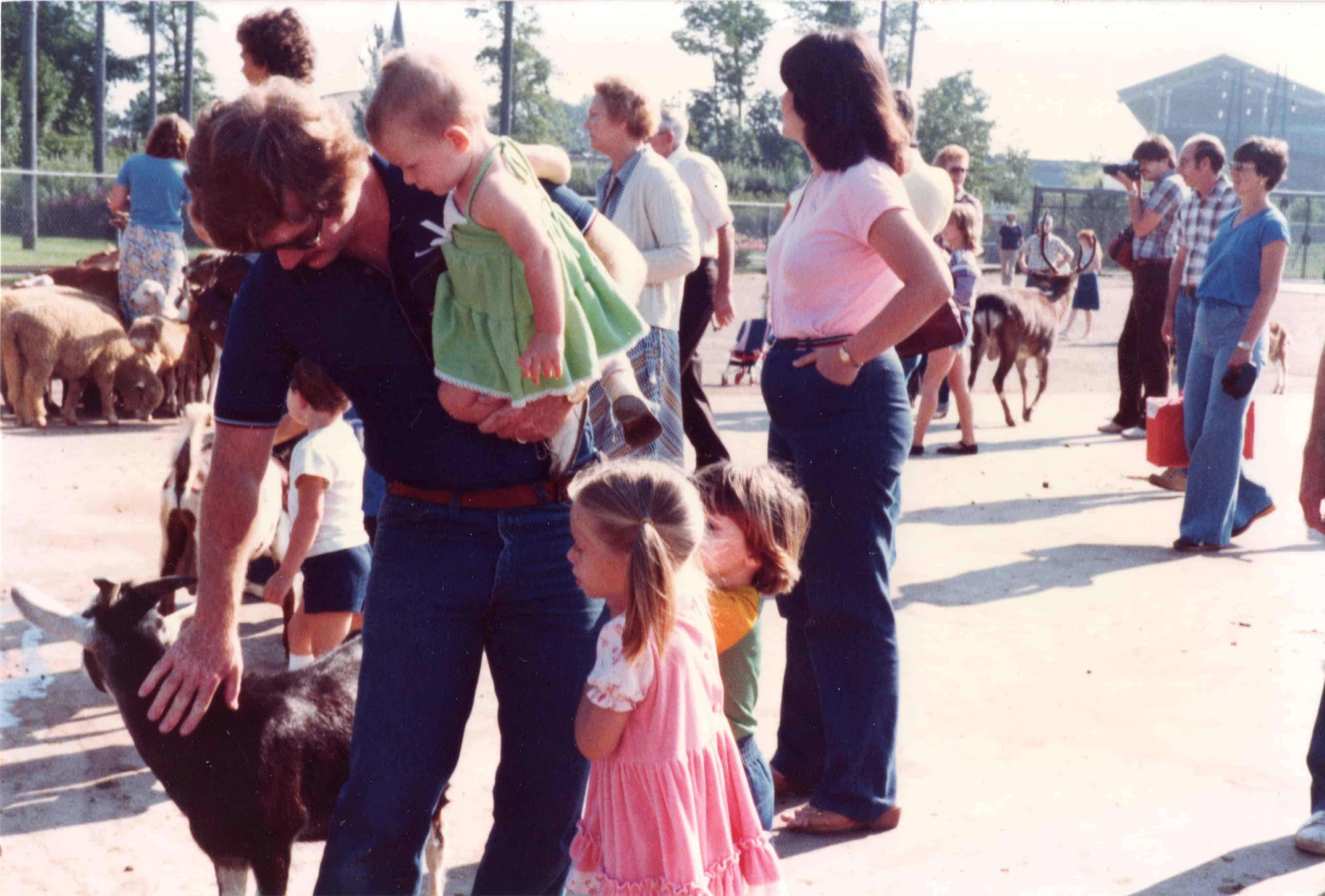 Posted on May 28, 2020
If you visited MarineLand as a child, you probably have fond memories, as I do, of goats tugging at your shorts, or being splashed by a killer whale. If you were lucky, maybe you even got pulled to the stage to give a dolphin a pat on the head. But behind the sounds of whooshing rollercoasters and laughing children, there are rumblings of unsavoury treatment of wildlife, as exposed by Phil Demers, known to many as ‘the walrus whisperer’.
Demers is a mailman who lives across the street from MarineLand, and for a duration of time, he worked as a trainer at the park’s aquarium, riding the whales to cheering audiences. While there, he formed a special bond with a walrus named Smooshi, and is now involved in a custody battle to #SaveSmooshi, that has received worldwide attention.
But his fight to save the walrus is just one part of his tumultuous relationship with MarineLand. He’s also the ringleader in a series of protests that were sparked when he began getting loud about what he claims to be unethical treatment of the animals, calling for an end to marine life captivity. The bad PR—which extended far beyond the front gates—spurred MarineLand to retaliate: they’ve sued Demers $1.5 million, for plotting to steal their walrus.

Filmmaker Nathalie Bibeau has been watching the bizarre story unfold for years, both in the headlines and in real life (she’s known Demers since childhood).

While she always thought the story was a compelling one, she was aware of all the messy lawsuits that surrounded this story. But moved by his courage, she believed she could tell a nuanced tale of human struggle, and took the plunge.
The Walrus and The Whislteblower premieres at Hot Docs on May 28th, and ticket holders can screen until June  24. We caught up with Bibeau, to find out what she’s discovered since embarking on this project, her thoughts on zoos in general, and more. 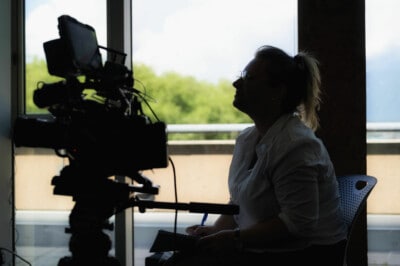 How did you first learn about this story?
I knew Phil Demers when I was a kid growing up in a place called Welland, Ontario, near Niagara Falls. He was a friend of my brother’s, both of them with a quick-tongue and keen to resist the established ways of doing things. So, I’ve been aware of this particular story, and watching it roll out online, ever since it was a story.
This is a fascinating story, but what was it that really compelled you to make a documentary about it?
It just wouldn’t let up, both in the public eye and in my mind. It was a crazy beast of a story that kept morphing and expanding, but I held back for a long time, out of fear, maybe. I had worked on other people’s great documentaries for years, but I had never done a feature film of my own before. There were reports of lawsuits flying around in the media against whistleblowers, activists and journalists, and on top of that, I wasn’t sure if I wanted to do a story that was so close to my home town. But the final trigger for me was when I saw the hearings in the Senate of Canada on the proposed ban for the captivity of whales and dolphins. There were scientists, politicians, legislators and animal rights advocates across the spectrum duking it out in our nation’s capital to figure this out… and then there was Phil. And I was just fascinated. How did this eccentric, feisty guy from my home town wind up here? It hit me that the paradigm was clearly shifting on all things related to animals and that there was a greater relevance to this story I had confined to a local dispute.  And I knew right then and there that, eventually, this was going to be my first film. 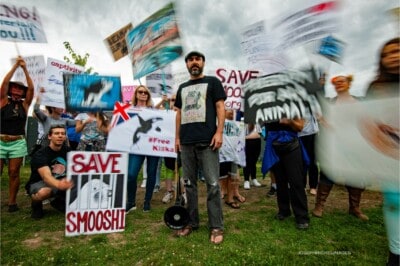 What questions or ideas do you want audiences to leave with?
I would love for the audience to see the nuances in this film. I would want them to leave with more questions than when they came about their own relationship to animals, and the hills they are willing to die on. I would love for people to challenge their own positions, which tend be black-and-white on this issue, to see the individual human struggle inherent in deep societal change, and to have empathy for people on all sides of it. I conceived of this as a character-driven film that pierces the veneer of a media story and gets behind the battle lines, in a way that I hope people haven’t really seen on this issue yet.
Right now,  ZOOs and aquariums around the world are being closed, due to COVID-19. How does this make you feel?
To be honest, anything related to COVID-19 makes me sad. While I have questions and concerns about captivity, based on my research and things I have learned while making this film, I have met people in the industry – scientists, trainers – who say they care deeply about the animals. And I have not doubted this about them. It’s a different philosophy, but their individual intentions, I believe, are authentic. I know that’s not a popular opinion in the activist world, but I’m being honest about what I’ve noticed and felt myself. Also, I feel sad for the animals, who may start to feel the pinch in resources, which is a bit scary. Having said that, the pandemic has given us pause to re-imagine a whole bunch of things about how we live and how we treat the planet, and the other species on it, so I hope that these questions continue to be asked in the zoo and aquarium industry, too. 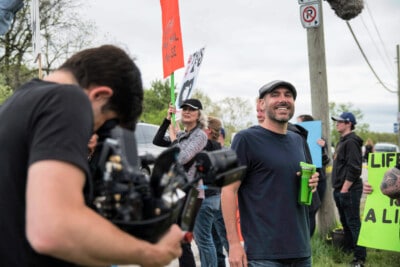 What was the biggest lesson you learned from Phil, AKA “The Walrus Whisperer”?
I laughed out loud when I read this question! Maybe because the first image that came to my mind was the trouble maker kid I crossed paths with growing up. Well, he’s a character who is at once inspiring in his resilience and resolve, but also frightening in his intensity and uncompromising nature. Any lesson I may have learned from observing his life is somewhere between a cautionary tale and a reminder to keep that spark in the belly alive – for whatever it is you believe in.
What did you discover about yourself while making this doc?
That you can take the girl out of Welland, but you can’t take Welland out of the girl. I left that small town over 20 years ago, thinking I’d never look back except to go visit my parents. While I was busy living in other countries and cities, I never imagined it would be the concrete of my home town that would give me the material, and the courage, to take this huge leap in my career and in my life. I’ve discovered that, despite how different I felt from the people around me growing up, that gritty, quirky, resilient terrain is in my bones. And it felt damn good to “go home”.
The Walrus and The Whistleblower is having it’s world premiere on May 28th, as part of Hot Docs, and audiences can screen this compelling and poignant doc, with filmmaker Q&A, until June 24th.