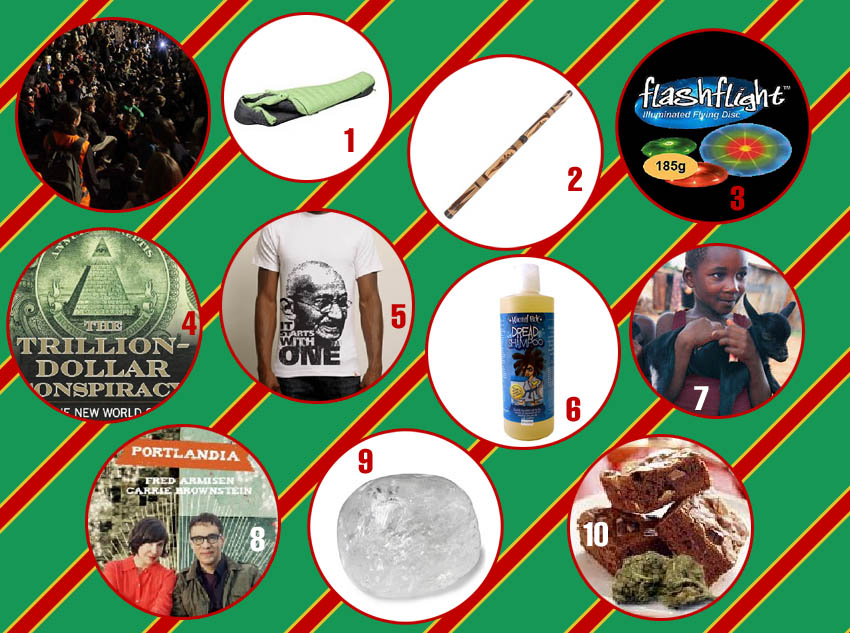 Have an Occupy Bay Streeter on your gift list? Pretty much you’re damned if you do give (why are you buying into this capitalist, commercial holiday?), and damned if you don’t give (are you trying to stifle my ideology by boycotting my Christmas gifts?). Here are some gift ideas that may help you navigate this delicate territory.

1. MEC Hybrid sleeping bag
Nights in yurts can be cold. This bag will stay cozy even when the mercury drops to -12C.
$139 @ Mountain Equipment Co-Op, 400 King St. West

5. “It Starts With One” Tee
While the Kielburger brothers’ Me to We social justice movement may be a bit too corporate savvy for your average Occupier, who can deny the universal appeal of Gandhi?
$35 @ Me to We Store, 223 Carlton St.

7. A Goat.
Buy a goat through Plan Canada for an impoverished family in a developing country. Gift not recommended for vegan Occupiers.
$75 @ Plan Canada, plancanada.ca

8. Portlandia Season 1
I find it hard to believe that any Occupier could be so sincere that they wouldn’t at least get a few giggles from Portlandia’s sketches on locavorism, feminism, environmentalism and hipsterdom.
$19.98 @ Amazon

9. Lafe’s Crystal Deodorant Stone
This crystal is popular amongst those who feel that perspiration is a natural, healthy phenomenon, but rank smells are still gross.
$4.50, Grassroots, 408 Bloor St. West

10. Pot Brownies
If all else fails, nothing says I love you and I hate capitalism like pot brownies.