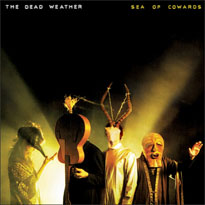 The Dead Weather: Sea of Cowards

by Caitlyn Holroyd
Jack White is making it difficult for me to stay mad at him for the much-too-long hiatus of the White Stripes. After all, his venture into the realm of super-group has produced two solid bands and albums that have received plenty of play on my iPod. I guess it’d be worse if White himself had gone missing all these years.

Less than a year after the Dead Weather (White’s third band) released their debut album Horehound, they’ve returned and managed to avoid the notorious sophomore slump with follow-up album Sea of Cowards. While the band’s signature combination of grit, blues, and rock is still evident, this album has something more to it than their first. It feels weird to call it maturity after such a short time between albums but some of us grow up fast, right?

The first evidence of something more comes by way of split vocal duty between Alison Mosshart (who did most of the singing on Horehound) and White. It’s pretty obvious White is in charge here, especially when he mutters the lines: “Check your lips at the door, woman! / And shake your hips like battleships! / Yeah, all the white girls trip when I sing at Sunday service!” on opener “Blue Blood Blues.” Not to be outdone, Mosshart comes in with just as much swagger and badass attitude, growling her way through the tracks that follow.

Album highlights include the reggae and organ-infused “Gasoline,” the psychedelic “Hustle and Cuss,” which could easily be mistaken for a long lost Zeppelin track, and the ender “Old Mary” – classic horror film meets Catholic prayer.

Two albums later and no signs of slowing down, I think it’s safe to call the Dead Weather more than a simple jam session.