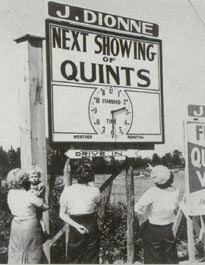 Why We Should Care: Born two months premature on a farm near Callander, Ontario, Annette, Emilie, Yvonne, Cecile, and Marie Dionne beat the odds as the first quintuplets to live more than a few days. The provincial government (under then-premier Mitchell Hepburn) removed them from the custody of their parents, Oliva and Elzire, though the quints’ five brothers and sisters were left at home. The infants were relocated to a specially-built hospital across the street, where they soon became the largest tourist attraction in Canada (that means more people than Niagara Falls!) A viewing area in “Quintland” allowed tourists to watch the girls through a screen; they were immortalized as dolls, and also appeared in movies and commercials, eventually becoming an asset worth $500 million to the province. It is speculated that the initial government interference in their custody was to prevent the parents from bringing the girls to the United States, which would have cut Canada out of the profits. The Dionnes fought against Quintland for nine years before bringing their daughters back home across the street.

Hard-Knock Life: The commercial exploitation did not stop when the Dionne girls returned home. They felt alienated from their family and later alleged that they (and other siblings) had been abused by their father. Emilie died at 20 of a seizure, Marie at 35 of an apparent blood clot. In 1998, the government of Ontario granted the three remaining sisters $4 million for the nine years they were held in Quintland. Yvonne died of cancer in 2001.

Style Best Described As: Matching! Like a team of five Shirley Temples, the cuteness meter would overload when they were around. Of course these little ladies were always dressed the same; who would pay to see non-matching quintuplets?

In Their Own Words: “Multiple births should not be confused with entertainment, nor should they be an opportunity to sell products. Our lives have been ruined by the exploitation we suffered at the hands of the government of Ontario, our place of birth. We were displayed as a curiosity three times a day for millions of tourists. To this day we receive letters from all over the world. To all those who have expressed their support in light of the abuse we have endured, we say thank you.” (Annette, Cecile and Yvonne discuss the McCaughey septuplets in 1997)

She Changed The Game: Meet Emily Mills, Founder of How She Hustles