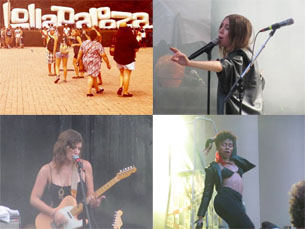 What makes a good music festival? Beer, mud, and, oh yeah, music. This year marked the 20th anniversary of Lollapalooza, and  fans flocked Chicago’s Grant Park to celebrate under the city skyline. Tall cans of Bud in hand, double rainbows in the sky, we jumped puddles and jumped up and down for three days of incredible music in an incredible city. Read on for our favourite moments, including watching Aaron Paul eat pizza and face, learning how to get laid from Lykke Li, not hearing Frodo Baggins DJ, partying under Coldplay’s giant lazers, and poncho-dancing to Best Coast during a thunderstorm.

Foster The People Cover Neil Young
The summer’s favourite get-happy rock band played to a massive crowd in the sweltering sun on Friday. Fans were (predictably) enthusiastic for Pumped Up Kicks, but we couldn’t help but grin when the band broke into a rendition of Neil Young’s ‘Heart of Gold.’ -HC

The trifecta that is Coldplay/Ratatat/Girl Talk
Day one of Lollapalooza included tackling the simultaneous sets of Coldplay, Ratatat and Girl Talk. We did it, and discovered that all three go together surprisingly well. Coldplay wowed us with fireworks, lasers and nostalgic songs against the Chicago skyline; Ratatat had us dancing amongst the trees and into the streets; and Girl Talk provided the ultimate mash-up dance party to end the night.  -CH

The Art Institute of Chicago is worth a visit
One of the best things about Lollapalooza is its location, in one of the most beautiful cities in the world. What other festival allows you to take a lull in your schedule and fill it with a trip to take in a staggering art collection? The Art Institute of Chicago is located right beside Grant Park, and you can spend a hour or nine wandering its many rooms and floors, taking in famous works like Edward Hopper’s Nighthawks, Grant Wood’s American Gothic, Monet’s waterlilies, Van Gogh’s Bedroom in Arles, and so many more. Through October 23rd, Windows on the War presents moving and artful examples of combat propaganda throughout history, the surprising variety of styles and influences resulting in a captivating chronicle of human suffering. artic.edu       -HC

Lykke Li teaches us how to get laid
Not many people can dance for an hour straight in an architecturally-cut leather poncho in 100 degree heat, but Lykke Li can. Why? Because Lykke Li can do anything. In between pounding with a drumstick on any available surface and singing songs over the beat from Kanye’s ‘Power,’ Lykke Li batted her eyelashes as she asked people not to leave the stage, and told us we were all too shy. “I’m going to teach you all how to get laid!” she shouted, swaying her hips to the music. -HC

Aaron Paul Likes Pizza, Blondes
Sporting a beard and shaved head, Breaking Bad’s Aaron Paul was a man of the people during the festival, waiting in line for pizza just like the rest of us, and stopping to give any and every fan a friendly hello. Later on Saturday night, he was looking a tad more keys-to-the-VIP during the White Lies DJ set at Debonair, drink in one hand in a leather booth, while he made out with a beautiful blonde wearing a fedora. -HC

#HobbitWatch2011 at Debonair
After receiving a tip-off from some friendly floormates in our hotel that Elijah Wood was DJing at three bars in the Wicker Park ‘hood on Saturday night, we made it our mission to find him. Unfortunately, Mr. Wood proved too sly and slipped out of Debonair Social Club to hit the W Hotel just before we arrived. We did, however, have an amazing night dancing to the White Lies DJ set and fell in love with their fancy washroom facilities (note: we’d been using porta-potties for two days straight at that point). Reports from the dance floor were that Wood is just as lovable and short in person, and pretty good on the decks. 1575 North Milwaukee debonairsocialclub.com -CH

Flash Taco
Four am Mexican food is never optional, and Flash Taco in Wicker Park is worth the wait. Blaring Kelis while they fry up amazing tacos, burritos and quesadillas, there’s a reason it’s lined up out the door. You won’t be sorry you stuck it out. -HC 1570 N. Damen Ave. flashtacobucktown.com

Admiring Chicago’s architecture
Chi-Town does a lot of things right but one of the most notable is definitely their stunning architecture. The Auditorium Building, Willis Tower, Wrigley Building, Buckingham Fountain…Chicago’s skyline provided the perfect backdrop for Lollapalooza. -CH

Popping bubbles at Dale Earnhardt Jr. Jr.
On Sunday afternoon, we dragged our tired selves to the muddy front row of Dale Earnhardt Jr. Jr. and were treated to a set that included cool racing attire (’cause, you know, they’re named after a famous race car driver and all), a surprisingly good cover of Whitney’s “I Will Always Love You” and a bubble machine. We also couldn’t help but aww when the boys told us: “Sing along whenever you want, and dance whenever you want, because this is your show. This is not our show; this is your festival.”-CH

Best Coast cure heartbreak during an epic thunderstorm
On Sunday, Grant Park was battered with a violent thunderstorm that lasted precisely the length of Best Coast’s set. While Bethany Cosentino apologized for the rain, we danced like maniacs in a mud pile wearing ponchos and grinning ear to ear. Soaking wet, the band played an album-perfect set that embraced everything perfect about long, lazy, aimless summers.-HC

Nas Wears a Blue Jays Cap, We Have an Orgasm
Nas and Damian Marley’s standout set was festival-predictable, with a plethora of Bob covers, Distant Relatives tunes, and irie flag waving, but one thing we couldn’t predict was Nas’ olive-green Blue Jays cap, which will go down in history as the sexiest thing we have ever seen. Ever. -HC

Bidding a fond farewell to Lollapalooza at Kid Cudi
By the time Kid Cudi hit the stage Sunday night, we were wet, muddy messes from the torrential downpour that hit Grant Park for the second time that day but were determined to end the festival on a high note. Perry’s Stage provided shelter from the mud-slinging outside while Kid Cudi proved to be the perfect nightcap for our trip. Cudi played all the hits, and covered “All of the Lights,” telling everyone that his “big brother” Kanye couldn’t be there, so we were going to have to party for him. Fans did as they were told, fashioning bongs out of Bud cans and chanting for an encore long after the stage lights went out.

Ready for the Festival

Some of Chicago’s amazing architecture

And that’s how you fuck Gwyneth Paltrow: Coldplay’s lightshow

We love you, Chicago

The Art Institute of Chicago is definitely worth a visit

Inside the Art Institute of Chicago

Thanks for the limited edition scarves, Topshop!

El Wire Man wants to be your friend