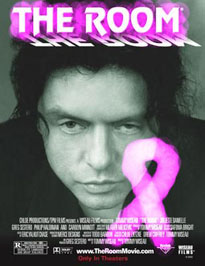 The Room Screening in support of the Quebec Breast Cancer Foundation

If you’ve seen The Room – the 2003 cult film considered by many to be the worst movie ever made – you know that breast cancer is an important issue in the film. In the sublimely idiotic script by Tommy Wiseau (who also directed, produced and starred in the movie), a leading character casually reveals she “definitely has breast cancer,” only to have the issue completely glossed over and never mentioned again.

To pay homage to The Room’s profound and sensitive handling of the illness, the people behind The Room Montreal Monthly Screenings have decided to raise funds for others who “definitely” have breast cancer. Proceeds from this month’s April 9th screening will go to the Quebec Breast Cancer Foundation.

If you haven’t yet seen this cinematic masterpiece about love, betrayal, and tossing footballs, now is the perfect time to do something good while watching something so, so terrible.