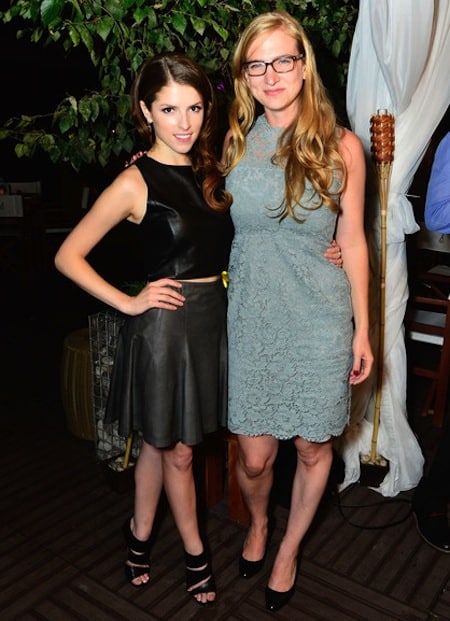 Thinking of joining The Spoke Club? There are lots of reasons to take the plunge, but right now our favourite is Anna Kendrick. Queen of funny, the bitch with perfect pitch, our future wife or BFF (she can choose, it’s only fair). Last week, during TIFF, Miss Kendrick got her Spoke card stamped, because she knows what’s up.

Aside from a plethora of parties, fun cultural happenings and events rolling through the club, it’s a lovely escape from the hustle and bustle of city life. The moment you get in the elevator, it feels like you’re going to a sanctuary. It’s a hidden downtown space that’s slick but cozy and cheerful. There’s none of the pretension or bullshit that has plagued members-only clubs since, well, forever.

Instead, you find yourself in a gorgeous space that’s welcoming, where staff know your name and the service is top-notch, always. It’s beautiful without being too precious—like, you could still put your feet up on a chair in the lounge if you needed a little mid-day stretch. Whether you’re there to get some work done, take a meeting or treating a pal to lunch or dinner, you’ll have a great time and memorable experience.

Known for legendary parties, the Spoke Club kicked off TIFF with a week of swanky soirees with Hollywood and Canadian A-listers alike. Aside from Hayden Christensen, who had a quiet dinner with pals, the likes of Tatiana Maslany (c’mon Canadian star system), Jason Priestley and Cara Delevigne all stopped by to indulge in the party scene or celebrate with co-stars. Most importantly of all, The Spoke’s decadent rooms were graced by none other than the love of our life, Miss Kendrick.

Unfortunately, it’s been a busy couple of weeks, but as soon as our schedule frees up, we’re definitely hitting up the Spoke in hopes of getting a whiff of La Kendrick’s lingering perfume… or something less creepy, oh god we just love her.

And now, we will leave you with some words of advice and general life reflections that our very close friend Anna Kendrick has shared with us, personally. On Twitter.

Sidenote: why doesn’t she have a talk show yet? And WHY DOESN’T IT SHOOT AT THE SPOKE CLUB? Who wants to find themselves between some crusy ol’ ferns when you can be SPOKEn to by Kendrick, AMIRIGHT? (I’m right!) Guyz, this is a million dollar idea. Make it happen, somebody.