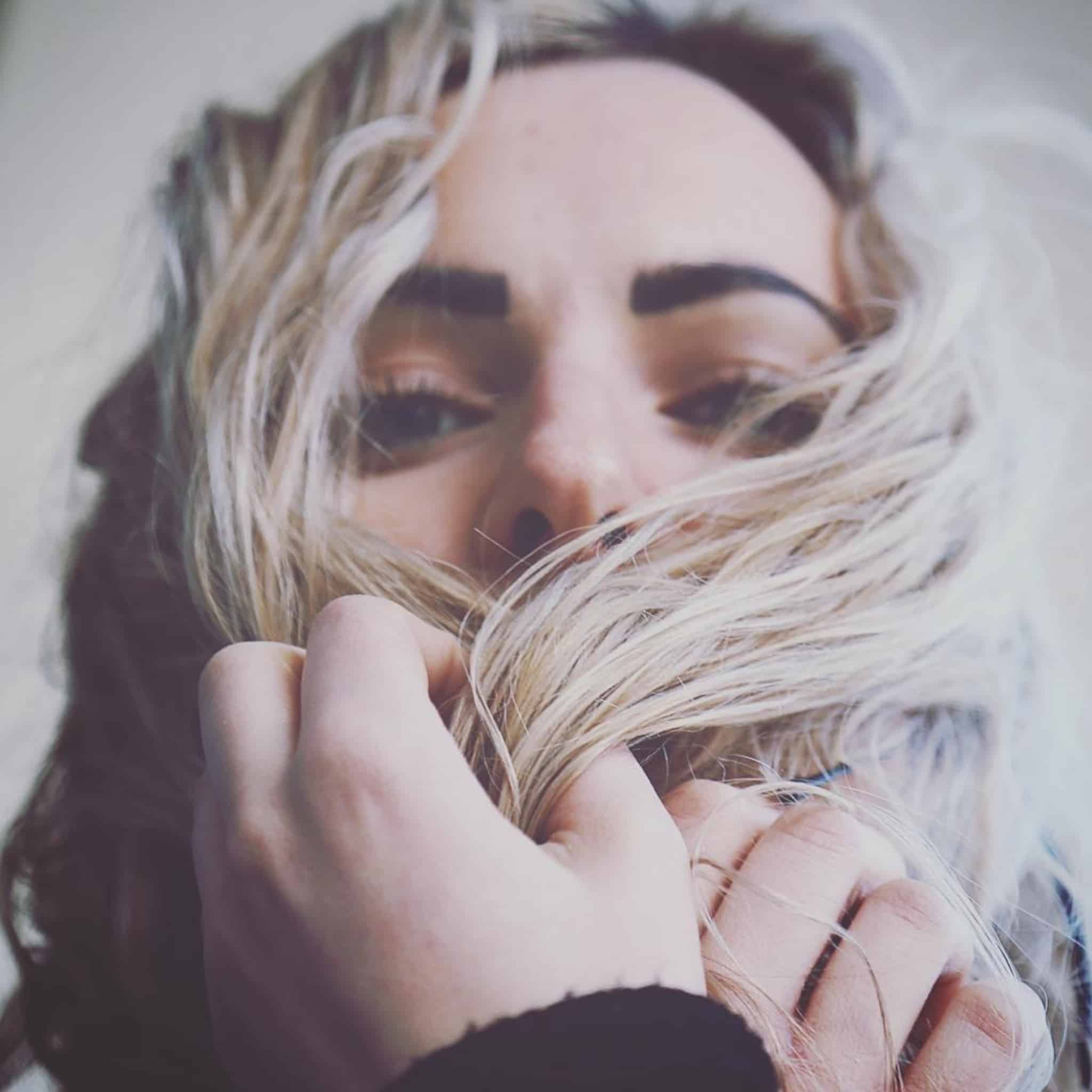 When I look back on the past decade, I see many versions of myself. Some chapters are more upsetting than others, like when I was twenty-three, living at home, desperately wanting to be loved, and didn’t understand boundaries. I needed to have the rug ripped from under me a few times to realize what I experienced didn’t need to be my reality.

“Camille, why do you even like this show?” He stared at the screen with a furrowed brow. I was lying on his bed watching the first season of Girls on his computer.  It was raunchy, real, and I was intrigued by the women’s rawness.

“I don’t know… I kind of like it…” I felt mildly embarrassed, but even more than that I felt like I was about to get in trouble. Though I was pushing twenty-two, I still felt like a kid. I was working, doing stand up, and living at home. Now, I found myself twisted up in my first boyfriend.

“This show’s lame. It’s going to make women feel like they can actually act like that. Whatever, it’s your brain.” I felt his annoyance surge through my body as he left the room.

“Yeah, you’re totally right,” I yelled after him. “Okay, I’m done watching! Anyway, Lena Dunham’s not even attractive, who does she think she is!” I switched the monitor off while praying that me watching this now stupidly horrible show wouldn’t ruin our night together. I felt dumb and I hoped this didn’t make him think so too.

I noticed early on in the relationship that he had some issues with women in general, but I wasn’t able to stand up for myself or other women at that time. I didn’t take issue with his lack of support, and was under the impression that everything about my relationship smelled like roses. In reality it smelled like weed, old cat litter, and Glade air freshener.

“Name a singer better than Freddie Mercury, go on, you can’t!”

I muted myself to accommodate him, but my gut would sting every time I backed down. I found It was easier to agree because it meant less chaos, which I had had enough of. The more I did this, the more I failed to pay attention to my body. I pretended nothing was wrong, I ignored what my body was trying to tell me, and instead began loathing it for its shortcomings.

My mom had spent the last couple of years going haywire with her drinking and after crushing my Dad’s finances in the divorce, she picked up and left, moving on quickly by creating a new family sans us. My dad was struggling; he had settled in the divorce by taking on a large sum of debt that my mom created, and he now had four kids to worry about.

Each of us kids sat with our new reality in our own ways. I was depressed and anxiety-ridden, but there was nobody to help me understand what had happened. Instead, I let myself be consumed by a guy who I had allowed to take full reign of our relationship. I was depressed, and I felt bad about myself. I couldn’t think or articulate my feelings properly, I didn’t know where to start, and my gut took it all on with digestive issues, and never ending cystic acne, which only perpetuated the cycle of low self-esteem.

I was mourning the loss of my mom, who I had thought would always be there for me. Reeling for her to come back, I used my body to pretend I was a human while my mind was far away.

A year into this atomic relationship my sister was diagnosed with a rare form of cancer. Her diagnosis finally shook up my core. My mom was still out of our lives, incapable of being a mother to us, and my sister wanted her to stay far away while she began Chemotherapy. When my birthday rolled around, my family was months into grappling with my sister’s diagnosis, so my boyfriend, and I decided to get away to Niagara Falls for the weekend.

I remember how physically weak I felt. Having barely slept or eaten, my anxiety was off the charts. I had developed cysts on my ovaries, I had lost about fifteen pounds, and my skin was horribly broken out.  My self-esteem was at an all time low.

Looking back, it’s hard to believe I never saw a real problem with my health. We got to the hotel after a huge argument and all I wanted to do was sleep. At some point we were talking about a visit with his family, who lived a few hours away, and I asked what they had said when he had told them of my sister’s diagnosis. “Oh, well, I didn’t tell them yet. I figured I’d wait until I saw them in person in a few months or something.” He said it so casually, like I was an idiot for asking. I was beyond confused. Wasn’t this a big deal? My gut twisted tighter and tighter.

But sometimes he appeared to be incredibly caring. He brought over medicated cookies, and rolled joints for my sister after her chemotherapy sessions. When I took a puff from a big blunt at a concert and started spiralling with paranoia, I asked him if he could call my dad because I thought I had just smoked crystal meth. He comforted me, “It’s just weed Camille, don’t worry.” He kindly took care of me and safely got me home. Looking back, I realize weed was his love language and he spoke it well. Those moments of kindness kept me going in the relationship as they seemed to outweigh the toxicity.

One day I was in a solemn mood and he asked, “What’s your problem? You’re acting weird. Is it because your sister’s sick? I don’t buy it.” I knew how these arguments played out: he would tell me I was wrong for whatever I was feeling. But this time it was different; I didn’t care what he thought when I replied, “Yeah actually, it does have to do with my sister. There is a lot going on right now and I’m not feeling great.” I walked out.

I sat down with my dad and youngest sister and told them how bad things had gotten. Feeling their support and love gave me the confidence to make a change. I tried my best to break up with him in person, but he eventually talked me out of it.

Before this all happened I was selected to perform for a comedy showcase. I showed up alone, rattled, and nervous. He was there. Even when we were still together he said he wasn’t coming. Why was he there now? I was angry and my set was a disastrous mess. Afterwards, I walked over and asked him why he was there. He scoffed and told me he was there for a buddy that was showcasing. We walked away from the crowded door as he said, “You’re going to be fine, and I’m not. You’re going to find someone, and I’ll find some random girl who likes to smoke weed.” All too familiarly I felt the need to take care of his feelings. He sat in his friend’s car crying as I stood there feeling guilt and confusion. We got back together later that week. In that time I remember him telling me “If we ever break up, and you talk about me on stage…” He then did a physical act out of digging a grave.

Two weeks later was the last night that we were together and unsurprisingly, my body acted out what a mess the relationship was by subjecting me to an orchestra of diarrhea that entire night. My body seemed to have been trying to tell me something was wrong all along, but I never listened. It was as if it was saying, “Jeez, do I need to spell it out for you Camille?” I made at least fifty trips back and forth from my bed to the washroom and back. I never saw him again. He stopped responding to my messages. We didn’t break up, I was ghosted. He texted me, “What a beautiful sunny day it is, I hope you get to enjoy it. I’ve left your things in a bag for whenever you can pick them up :-).”

I picked them up, half expecting some sort of conversation to bookend the relationship, or maybe even another discussion about his love of weather talk. All I found was a bag of my underwear, pyjamas, and coconut oil. I wondered if he needed to be in control so badly that he got back together with me just so he could have the last say.

If you asked me then what I learned from that relationship, I wouldn’t really have an answer because I was left feeling angry, betrayed, and disjointed. But once I started removing anything that no longer served me, my body started healing and I don’t think that’s just a coincidence. If you asked me now I’d tell you I learned about the importance of listening to my gut. I learned the deep console of emotional support, the ability to forgive, and above all, to listen to my body as it may know things before I do.  I learned that forgiveness is not about the person I need to forgive, but more importantly it’s about forgiving myself.

Now I stand on the edge of thirty, the latter-half of my twenties deeply instilling the growth that I desperately needed to go through. My mom taught me how to set boundaries, and the people I’ve dated taught me how to listen to my body. I’ve learned how to start expressing myself and to have compassion and to take accountability for the version of myself that couldn’t. I stand strong in my understanding of unconditional love which was much different than what I was used to. I feel the privilege to be able to share that with people and try not to take it for granted.