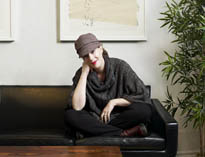 This Week in Inspiring Women: Debra Goldblatt, President and Founder of Rock-it Promotions

It’s always strange, the first picture your mind’s-eye takes, of someone who will mean something to you.

It was early morning. I was alone in a Beck taxi, on my way to my first ever photo-shoot.

“Does the window work back here?”

It was hot, the summer I was 16. It was a summer of firsts; first kisses, first drinks and first heartbreaks, but not the kind you’d expect. The night before, I had gotten news that my sister’s husband’s cancer had spread, from first his skin, to his lymph nodes, and now, his liver.

I could get out of bed that morning for the photo shoot because I’d convinced myself he would get better. We all had. “He doesn’t look sick,” I whispered to no one in particular while getting dressed. He would live for two more years. In the end, he looked nothing like himself, no longer dark and handsome and strong. Upon his death, he resembled only illness and sorrow.

Trying to push the sad thoughts that I wouldn’t acknowledge out of my mind, I looked for a piece of paper in my jean pockets.

“Yeah, this is the address she gave me,” I said, telling the cab to stop.

Then, I laid my eyes on Debra Goldblatt for the first time, outside of her apartment building. She was beautiful; with dark curls, in a tight dress, searching through her purse. She looked up and she smiled at me.

When I think of Deb now, that is the woman I see; striking, bold, and waiting for me.

That morning, she was hired as a publicist, on behalf of the film I was in, Some Things That Stay, to accompany me to the photo shoot, to make sure everything went okay.

In the cab, we got to talking instantly and with more candor than strangers do. She spoke to me about her then boyfriend, and now husband, director Matt Austin Sadowski.

“He’s so smart, and fantastic. We didn’t plan it. I guess with these things you never do.”

When she asked me what was going on with me, I told her.

“My sister’s husband is really sick.”

Then, her face fell.

Gravity shifted. I touched her hand, and from that moment on, we were supernaturally bonded.

Maybe James Joyce was right when he said that every bond is a bond of sorrow.

For years, Deb and I have floated in and out of each other’s lives. We’d work together on and off; when I had a movie coming out or during festival seasons. I’d see her at industry events, always juggling a million roles and making it look easy. It goes without saying that she is the best publicist in Toronto. She is also one of my favourite people in the world.

In the time I’ve known her, Deb’s company, rockit-promotions has expanded and become an empire. She also got married, became pregnant and had a beautiful daughter.

As I grew from a girl to a woman, my life has also changed in ways I couldn’t predict. So has my career, in large part to Debra and her hard work. Any success I’ve had is also hers.

When I’m thinking of women to interview about life, love, loss and triumph, the first picture I see is the one my heart took of Deb, six long years ago. What lessons can young women, like myself, excited and scared of the uncertain future, learn from her?

1. YOU DON’T HAVE TO HAVE IT ALL FIGURED OUT.

How did you get started in PR?
Initially, I had a degree in creative writing and was going to pursue a career as a poet and a play write. I knew it was a lifestyle that I would likely have to supplement for a long time, so I was doing telemarketing and managed a dating service, which totally burnt me out. I found myself at this really difficult crossroads. I had moved up really quickly in the ranks of business and especially in sales, but the creative part of my life was getting smaller and smaller and smaller. I was very frustrated. So, my oldest and best girlfriend introduced me to a few people; an agent, a producer, and a publicist. The publicist, Jill Spitz, and I sat at a party, talking. She asked me, “Can you write?” I said yes. “Can you sell?” I said yes again, and she said, “Okay. You can be a publicist.” After that, I worked at an agency for about six months, but then, my mom was quite sick with cancer. I knew I had to leave to spend more time with her, so I moved back home. And I said to her, “What do you think of me starting this thing on my own?” she was so supportive. She was still alive when I started it. She passed the following November. And that was a beautiful part of this business, she got to watch me start it. And it grew from there. Within the first year, I hired an assistant and then every year beyond that the company has grown with numbers and with people.

DON’T BE AFRAID OF CHANGE.

Your business has expanded and changed greatly from its inception to now. You represent not only actors and artists but brands, like Frigidaire and President’s Choice as well. What motivated that shift?
When I started, I represented a lot of theatre and music clients, things that were close to my heart. I think as I’ve grown as a woman, as a wife, as a mother, those interests have changed. I used to love going out and seeing bands that started at 11 o’clock at night, but now I’m in bed by 10:30. However, decorating my home and buying art is very exciting to me! I think as my interests change and my passions change, so does my business. I do believe if you put things out in the universe, they come to you. As I’ve grown, my business has changed and I’ve accepted and welcomed that change. The principles of PR are the same across the board in my opinion, the nuts and bolts are the same. The things that differ from client to client, like person to person, are their objectives and their goals. Passions change over the course of your life, and if I was locked into one vision of this company, and ignored my own growth and changing interests, I would have missed a lot of fantastic opportunities.

3. KNOW YOUR PLACE, AND ABOVE ALL ELSE, KNOW YOURSELF.

Why do you feel you’ve been successful?
I think I’ve had success in my life because I don’t get confused by who I am. I’ve taken a lot of time in my early twenties, and now in my thirties, to be comfortable with my fears, my accomplishments, my scars. All those things make up your guts; who you are. I’m proud of my guts, I’m proud of who I am, I’m proud of my scars, and the pains that I’ve gone through and all the joys. I’m proud of the things I can pass onto people. A friend of mine who is a very successful publicist in New York said, and I agree, that in this job, you’re a part of people’s journeys. This life is our fate. You make certain choices, and yes, they do in part dictate some of our fate, but I also think some of it is very pre-determined. I am meant to be this ship on people’s journeys. If you stay true to that, if you try understand your place in people’s life, that it’s not all about you, that there is a much bigger picture in this world, I think you’ll be okay.

4. DON’T BE ASHAMED OF NEEDING HELP.

You’re now a mother and you’ve been a wife, obviously, for quite some time. How do you juggle it all?
I  have a lot of help. I have a fantastic team and a phenomenal nanny. She is a huge part of our life, I hired her while I was still pregnant because I am very organized. If you are going to juggle a lot of balls, you have to be organized. The hard part for me is to let go and to shake little things off. I’m not afraid of asking for help when I need it.

5. CONTINUALLY CHALLENGE YOUR PICTURE OF YOURSELF.

Deb, what’s next?
I’d like to write a book. I think I’m ready to come full circle. I don’t know how it will look, but we spent the last few months developing a new blog, called On the Fourth Floor. When I wrote poetry, I used to have the poem being cooked in my head for awhile. That was my process. The blog was sitting in my head for a long, long time. Then overnight, it came to be. I think the book will be an extension of that, and will come to be like that. I think I’m ready to wear another hat.

When I leave, Deb and I laugh and hug. I know that I probably won’t see her for months, because our lives will get busy, not leaving a lot of time for people we love but don’t see enough. I look around her office and I feel a swelling pride. She is so inspiring and I can’t believe all of the things she’s done.

As I’m walking out the door, I’m stopped by her graceful voice.

“Do you remember the day we first met?”

Ethical Dilemmas: How Do I Ask My Partner To Open Up Our Relationship?

Ethical Dilemmas: Reckoning with Forgiveness in the #MeToo Era