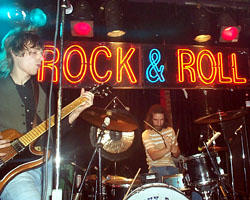 Self-described to Now Magazine by founder Joel Plaskett as “the squint-essential 90s band” (as in, “you have to squint until the ‘quint’ gets small enough”) Thrush Hermit dragged their battered bodies and boozy voices back to Lee’s for the last of three Toronto show dates, and the very end of their very last tour. In the history of mankind. Their words, not mine.

For those not quite in the know, Thrush Hermit embodies Canadian 90s rock. Think long drives through summer air, cassette tapes and radios at the cottage, that perfect riff to get your body movin’. It’s the music of friends and fond memories, and though the term sure is overused, this music is pure feel-good.

Openers were Toronto indie scene darlings Dinosaur Bones – if this city were a kingdom far, far away, these boys would be the Prince Charmings. Tunes that widen eyes and some real-deal friendliness to boot. Sweetly sung vocals, hellbent percussion and keys, and roughed up guitars make for just the nicest mix. Listen up now if you haven’t yet had the sense to do so http://www.myspace.com/dinosaurbonesband.

As the skies opened up on the trailing line of peacoated and K-Wayed concertgoers, the cavernous hollows at Bloor and Bathurst filled to brimming – something of a feat at 3 in the afternoon. By 4 we were resting our tired feet, perched above the crowd – and though there was barely space enough between bodies for even a friendly dance move, when Thrush took to the stage, every lip in the joint snapped shut. Eerie. Respectful and eerie.

The decidedly lovin’ it crowd included a few pint-sized friends, sporting the too-cute-to-be-true trademarks of your typical cooler-than-thou tot: junior ear muffs to protect those bebe drums, miniature concert tees, and snacks a-plenty.
By 5pm, with our own family-sized bag of cheesies more or less polished off, and our necks practically sprained from particularly enthusiastic head-bobbin’, we were floating on the squintessential 90s cloud.

“We’re still swirlin’,” bassist Ian McGettigan breathed into the mic as the sweaty foursome closed in on the end of their second encore and the crowd said their final goodbyes to an afternoon of pure nostalgia.
“We’re almost done but we’re still aswirl in this time machine. It’s 1999…”
More, more, more! – http://www.myspace.com/thrushhermit

Sing Your Heart Out: Win Tickets to Tafelmusik’s Sing-Along Messiah at Massey Hall

3 Must-See Shows at NXNE This Weekend