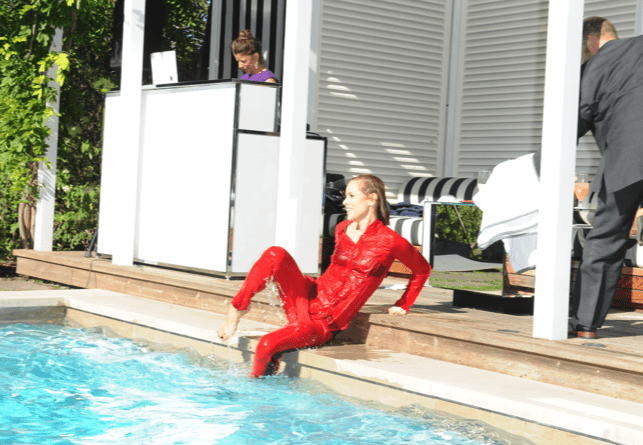 From the late night parties of opening weekend to celebrity snack habits, this is the stuff you oughta know. But what’s true and what’s total bullshit? Test your TIFF trivia! Answers are below.

2. Partygoers spotted a shiny blonde ponytail from the stoop of Magpie Bar; it was Brad Pitt ducking into Hudson Kitchen for a bite.

True. You probably could have spotted him while pumping a slushie at the neighbouring 7/11.

3. Later that night, Brad Pitt was seen ordering a Filet-o-Fish while walking through the drive-in at the Dundas and Bathurst McDonald’s.

False. But wouldn’t that be a great story? Don’t deny it, you’ve walked through that drive-through before!

4. Maria Bello jumped into a pool with her Louboutins on.

True. At the APJ (Artists for Peace and Justice) fundraiser, Maria Bello jumped into the pool after a winning bid of $20,000 was announced at the live auction. Good on her and even more so to the woman/man who put up the money!

5. Sandra Bullock was the life of the party at the Gravity after party at Patria. (Have you been there for brunch yet? Make a reso!).

6. Hugh Jackman did a 100 metre dash up Yonge Street to high five as many fans as he could before the premiere of Prisoners at The Elgin.

True. I’d show you the video that I shot to prove it but it somehow disappeared off my phone and I’m still really upset about it.

7. We think Don McKellar prefers his chips baked, not fried, because he was spotted munching Popchips in the Tastemakers Lounge.

8. Elizabeth Olsen stopped by I Miss You vintage boutique on Ossington for a pre-film shop.

9. Alanis Morissette made a surprise appearance at the Canadian Film Centre BBQ and delighted all when she walked out on to the second floor balcony and sang “IRONIC.”

False. We wish this had happened, though. It was a lovely party but the line for actual BBQ was so long that we left and ended up gunning it to BQM for a burger.

10. James Murphy of LCD Soundsystem dined at Momofuku on Friday night before DJing to a packed crowd at The Hoxton.

True. Sorry we can’t confirm what he ordered. Boooooo. Well, I suppose we could if we tried but…TOO BUSY!

11. Jake Gyllenhaal appeared to be enjoying the view at the spanking new patio at The Chase for the Enemy after party on Sunday night.

True. And if Jake enjoys it, so will you.

False. However, although Dakota wasn’t there, you probably were. Amiright?

13. While you were sleeping Sunday night, nearly every celeb in town fled to Soho House including Jesse Eisenberg, Jason Bateman, Ewan McGregor, Dakota Fanning, Ralph Fienes, Julia Roberts, and SO MANY MORE! Was it the Grey Goose Vodka that lured them? Maybe.

14. At the end of the Big Chill anniversary screening, Glen Close encouraged the entire auditorium to get up and groove to Marvin Gaye’s “I Heard it Through the Grapevine.”

False. This would have been my ultimate TIFF dream.

15. Since TIFF kicked off last Thursday, Whole Foods in Yorkville has seen a six percent increase in sales.

16. TIFF 2013 marks the first festival in four years that I have not yet been nearly bowled over by Harvey Weinstein.

True. From a rug store to The Horseshoe Tavern, I’ve been nearly ploughed down by Harvey Weinstein multiple times. I almost miss it. Actually, I do miss it. #TIFFTraditions

True. But you knew that. She was happy to chat with tons of partgoers at the Goodnight Gansevoort bash at C Lounge.

18. Judging by our Instagram feed, of all the stars it appears that Sandra Bullock took the most time to pose with screaming teens and tweens. Do you think they’ve even heard of SPEED?

True. Ain’t she the coolest? YUP!