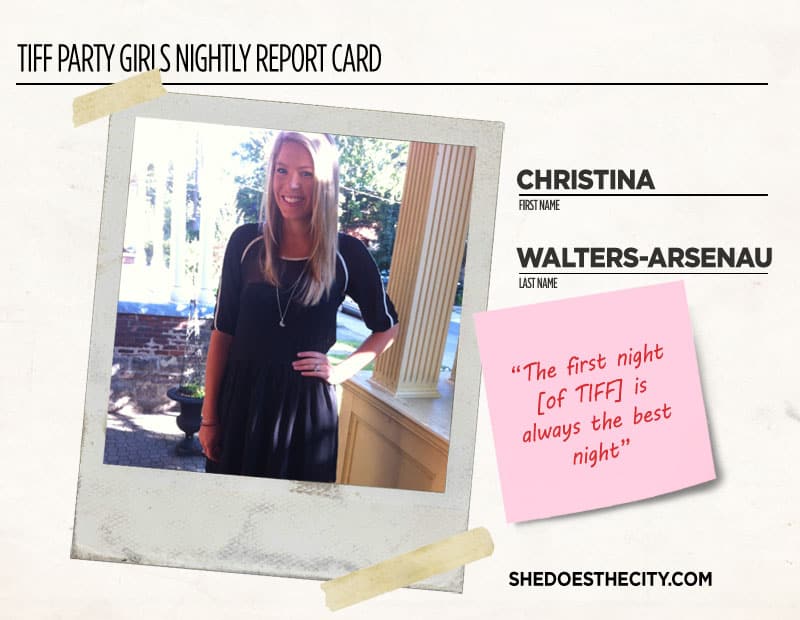 Describe your involvement with TIFF: Senior publicist at rock-it promo, which during TIFF means we’re working on Tastemakers Gifting Lounge, SOHO House, a few eone films, Drake Hotel, Festival Music House, and then all of our lovely year round clients, too.

The parties you attended last night: I attended the Toronto Life party, Blue is the Warmest Color after party, and TIFF opening night party.

What did you wear? I’m total cliché PR lady, and dress mostly in black during TIFF. Last night I was rocking an Artizia dress and flat boots, with a small heel, from Jeffrey Campbell.

Hear anything interesting? Weird? I overheard someone in the elevator talking about the VMAs, where they sat and watched Miley twerking IRL. Best eavesdrop of the festival thus far.

Celebs in attendance: Jian Ghomeshi (opening night party), Benedict Cumberbatch (SOHO House), The cast of Blue is the Warmest Color (at their after party).

# 1 Obviously. The first night is always the best night—when excitement is palpable, and we all still have energy.