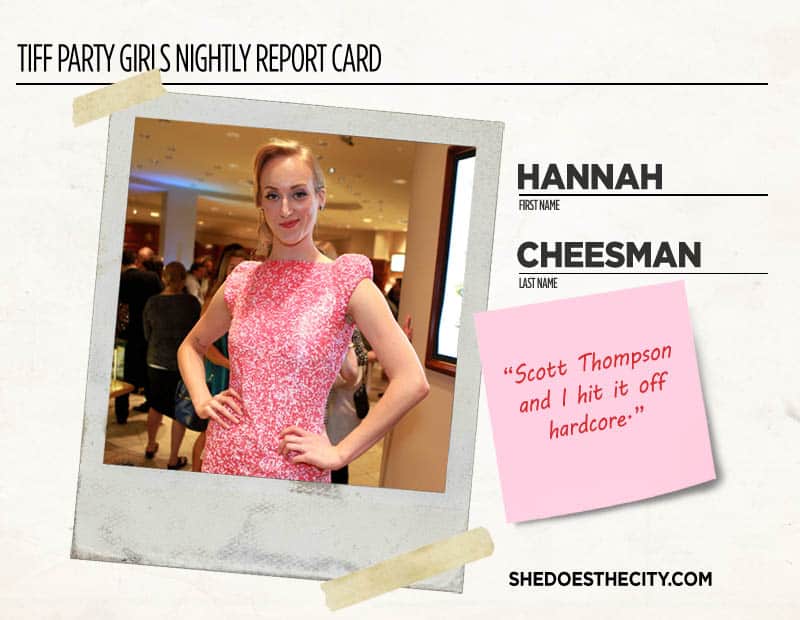 The parties you attended last night: We premiered our feature, The Animal Project, so I attended a few things. Pre-premiere was the BIRKS Women in Film celebration (surrounded by never-affordable diamonds and people like Paul Haggis, Deepa Mehta, etc.), red carpet, and drinking; post-Animal Project fete at The Monarch Tavern (with Orphan Black writer extraordinaire Karen Walton and End of Time‘s Peter Mettler). Then I drove around aimlessly with two friends until we landed at The Thompson (you know, it happens when you’re wearing a fancy pants outfit).

Hear anything interesting? Weird? Scott Thompson and I hit it off hardcore. He had food on his shoe and I dubbed him HUNGRY TOES. He later texted me “Lady Gams.” And I then called him “Scotch.” At the party we made jokes during speeches, and lamented our mutually broken left knees. He confided he would have preferred to have been a dancer, but that was too queer even for him, growing up. We agreed his knees would have been worse off today, had he gone that direction.

What you ate: Tiny hors d’oeuvres that included moussed mushrooms, very salty latkes with roast beef, and other amuse-bouches.

Bubbly. French Martini. Cosmo. In that order. Then only screwdrivers with soda. What about it?

If you could do it again, would you change anything? My TIFF motto has been: See an interesting person? Walk up and say hey. SO many good things came from this. And it’s been hella successful. So, the only thing I would change? Always: more cool people, rad dudes and dudettes, people with opinions, piss n vinegar, fervour, something to add or say, people way better than me, people with tons to offer. But. I met plenty of those, too. So I recant. No changes.