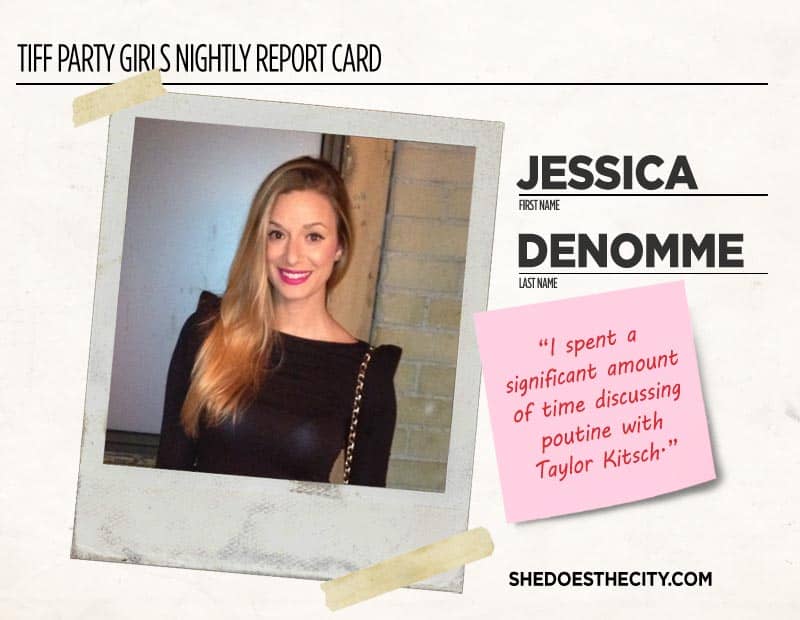 Describe your involvement with TIFF: EGPR represents a variety of lifestyle brands, including Brassaii and Hudson Kitchen—which are two of this season’s major TIFF hotspots. Brad Pitt and Matthew McConaughey, anyone?

The party(ies) you attended last night: The Devil’s Knot private dinner at Hudson Kitchen, The Grand Seduction premiere after party at Brassaii, Nikki Beach, and the Worldview Entertainment party at 2nd Floor Events.

Hear anything interesting? Weird? The Hemsworth brothers stopped by the Worldview Entertainment party, which was actually a highlight of my life. Also, I spent a significant amount of time discussing poutine with Taylor Kitsch. He likes Poutini’s if anyone is wondering…

What you ate: Brassaii’s Chef, Chris Kalisperas, created the most delicious chicken and waffles dish I have ever tasted in my life for the Worldview Entertainment event.

What you drank: Jax Coco, Vitamin Water, and some delicious SodaStream cocktails.

1. BEST TIFF night ever! I was in breathing distance of Liam Hemsworth (sans Miley…and her tongue)—there’s nothing more beautiful than that.