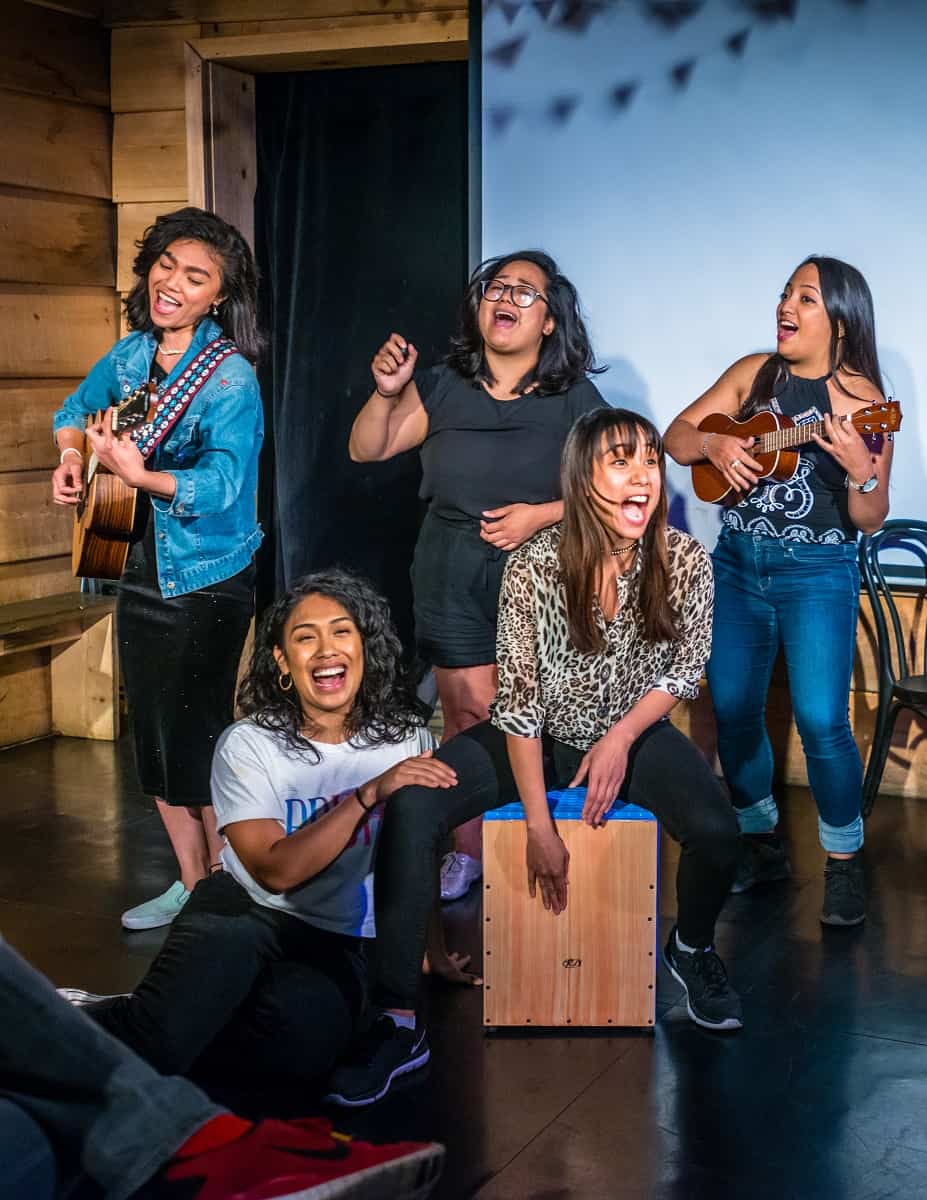 Tita Collective: Telling the (Funny) Story of the Filipinx Diaspora

AP Bautista, Belinda Corpuz, Isabel Kanaan, Alia Rasul and Maricris Rivera make up Tita Collective, a group of Toronto-based Filipinx multidisciplinary artists. Through their comedy, they tell the story of the Filipinx diaspora: how their families function (or don’t), straddling the Philippines/Canada divide, and the implications of being “other’d.” In March, they will be making their debut at the Toronto Sketch Comedy Festival.

We chatted with the group to find out more.

SDTC: So, tell me about how Tita Collective came together.

We all met through a Filipino theatre company as part of the creation and production of a play called Anak (child in Tagalog), which we collectively wrote and performed. We went on to collaborate on a few more projects, becoming close friends along the way.

We eventually created the Tita Collective to create multi-disciplinary theatre focused on Filipinx stories exploring different media, comedy being one of them. Some of us were already heavily involved in the comedy community, and after a few projects this year, such as Kwento (story), an improvised Filipino folk story, and Tawa (laugh), the first Filipino Comedy Festival, we decided that comedy was an accessible and fun way to tell our story and have continued to write comedy as a group since.

You come from a variety of disciplines. How have you each helped shape Tita Collective?

Alia is the comedian and producer. A project manager by trade, Alia loves to put together projects, find grants, artistic collaborations, and create work that we as a collective can tackle. Most of her work is focused on bringing diversity to the stage. She produces a monthly POC improv jam called “Humans of Improv” at the Bad Dog Theatre, where she is the inclusion director. She put together Filipinx-forward projects, such as Kwento (improvised folktale), Tawa Filipino Comedy Festival, Island Womxn Rise, Tang Ina and Tita Jokes (along with the other Titas, of course).

AP is the travelling thespian. Ann Paula is a graduate of the Randolph Academy Triple Threat Program and has performed in musicals all around North America. She writes songs and spitballs one-liners for sketches and real-life purposes.

Belinda is the multidisciplinary artist. Equipped with an extensive background in both music (Bachelor of Music in Performance from U of T) and acting (Prairie Nurse – Factory Theatre/Thousand Islands/CBC’s PlayME Podcast), Belinda loves to create stories and embody real-life characters with a spunky, musical twist.

Isabel is a writer and performer on CBC’s Air Farce, as well as the lead in the Haunted or Hoax series. Along with having multiple film and theatre credits, she brings comedy and acting chops to our group. We all write sketches, but as head writer, she edits and punches up each script for that extra comedic kick. She also shoots and edits our videos.

Maricris is a mover, musician and stage manager. Maricris has been dancing and singing all her life and produced a monthly interdisciplinary showing for solo artists called “Short Dances” in multiple locations across Toronto. She creates moves, sings harmonies and is passionate about telling stories onstage or from behind the scenes. 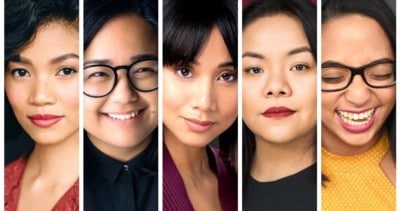 Why is the Filipinx diaspora experience particularly rich with material? Are you drawing a lot from your own personal upbringing when it comes to your sketches?

Members of the Filipinx diaspora have always been “other’d,” as they are foreign in both the country in which they are being raised (in this specific case, Canada) and are foreign in the country that they are “from,” the Philippines. Within the diaspora, there are deep divisions across generations, because the experiences of our immigrant elders are vastly different from the experiences of those that grew up here. So there is a lot of dysfunction to explore and because we are very community-driven and family oriented, we are constantly confronted by that dysfunction.

As a result, we are surrounded by a variety of big and loud characters: aunts and uncles that we love but don’t understand, younger cousins who are from a different world than us, elders from the Philippines who we can barely connect with, but still somehow everyone loves karaoke. Comedy, and storytelling, is a big part of our culture and is one way that we try to overcome our differences. All of our material is based on our families, our own identity struggles, and how the current political climate in the Philippines affects us (or doesn’t!) here in Canada.

Fave sketch ever, and why?

Alia: One of my favourite sketches ever was a sketch about cancer, and it was performed in the NBC Universal Bob Curry showcase in 2017, written by Franco Nguyen and Aliya Kanani. It portrayed something very real about a topic that is often hard to talk about, and it was HELLA funny. It made me understand a perspective I hadn’t thought of before, and I am very grateful for that.

What is the funniest thing you’ve experienced in recent memory?

Alia: I got into an UberPool once to discover that the driver and other passenger were both Filipino. The driver had a 90s classic karaoke playlist on and I wanted to sing along to it so badly, suddenly “Air Supply” came on and my co-passenger started singing at the top of his lungs. The driver and I started giggling because I think we all were thinking the same thing. I’ve never felt more connected to strangers in my UberPooling life.

AP: I was recently travelling in Australia visiting my best friend and learned a lot of cool Aussie lingo. They really like shortening their words or have different short forms for certain things. My favourite one that I learned is doof. A “doof” is what they call a rave or music festival. They call it that because of the sound the speakers make when they pump the tunes. You know like, “doof doof doof…” (insert fist pumps here).

Belinda: Every time I get mixed up for another Filipina. There was this one instance when a not-very-close-acquaintance kept mixing me up with her niece. I was in a restaurant and saw her walking by, and she came in to say hi. We were having a great conversation until she started asking me about my mom and how my first year in college was going (at this point, I had been three years out of school, and as far as I knew she had never met my mom). Then she said what she thought was my mom’s name. We shared a look and she finally realized her mistake. We laughed it off. A year later, I ran into her again…she had mistaken me for her niece again! I guess I just have one of those faces.

Isabel: Finding out it’s called a glove compartment way too late. For the longest time I thought it was a globe compartment, because that’s how my parents would say it with their accent. But I justified it in my head by thinking, “That’s where we put the maps, and globes are just flat maps,” so globe compartment made total sense to me.

Maricris: Anytime my family has a big get together, there is always an entire portion of the evening dedicated to packing up food at the end of the night. My mom and her sisters (my literal titas) come prepared with multiple tupperware containers, utensils and aluminum trays to make sure all the kids leave with enough baon (leftovers). It’s like walking into a baon factory. This year’s family Christmas party was at a church hall, and I somehow left the party with half an aluminum tray of lumpia and multiple containers of expertly packed Filipino dinners and desserts. I literally didn’t have to cook anything until 2019!

What can audiences expect from your performance at Toronto Sketch Comedy Festival?

They can expect to be transported into a different world. For half an hour, they will view society from our lenses. They will see our struggles and heartaches, but also how we cope with them through comedy and songs, and how we all lift each other’s spirits up as a community – as a collective.