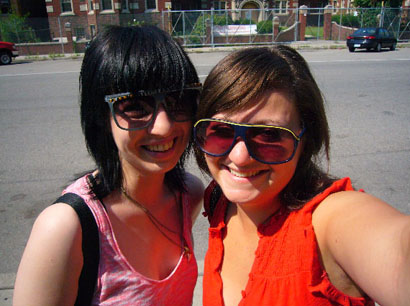 Top Ten Things to do in ‘The D’

by Nat and Carly

A couple of weeks ago we did what no two other people have done before. We went on vacation to Detroit. For fun. These are our tips.

1. Stay at the Shorecrest Motor Inn. They have many amenities; including double doors locks, blinds that are sewn shut for your safety, rent by the two-hour hair dryers, and on-site restaurant called The Clique. Some unfortunate patrons experienced intense inexplicable room odours – to the extent that they wished they could sleep in the parking lot. Our room, however, smelled delightful throughout our stay. The Shorecrest is located right downtown, and is a short walk away from a convenience store that carries a wide selection of liquors. We know what you’re wondering, and yes! They do accept food stamps. If you find yourself in ‘The D’, Shorecrest is your home away from home.

2. Win big at the Greektown casino buffet. For $9.95 the ‘International Buffet’ offers an unlimited amount of garbage from all over the world! Shovel mac and cheese into your gaping mouth and follow that with catfishsticks. But remember, save room for dessert…

3. Visit the neighbourhoood known as the Cultural Centre…

4. Choose your Coney Island. In downtown Detroit there are two restaurants next door to each other, each serving their version of a ‘Coney Island’ (hot dog topped with slop). We chose the less patriotic, but more authentic ‘Lafayette’ over its neighbour ‘All American.’ Neither of us ordered a Coney Island.

5. Be moved. Hop on the almost deserted People Mover, a service that no native Detroiter (or anyone else) considers taking. This is a shame because the magical monorail takes you on a close up tour of The D’s most beautiful and terrifying abandoned skyscrapers. The cost puts the TTC to shame at a mere 50 cents per move. It also runs at night, but in our estimation climbing aboard an unmanned discount transportation service in ‘Merica’s most dangerous city is like paying 50 cents to ride the rape bus.

6. I’ll be glad to see ya later (there’s no way there’s an elevator). The welcoming Hotel Yorba that Jack White warbles about in the eponymous song is a site for sore eyes. Hotel? Turns out it’s now government housing. We did not know this at the time.

7. Olé? Described as being the most vibrant area of Detroit, Mexicantown was painted as a colourful fiesta, full of street venodrs, burritos and piñata parties. We arrived there at three pm on a Saturday to find one deserted block, a few closed restaurants and zero Mexicans. Luckily, the one restaurant we wanted to go to, Xochimilco, was open. We’ve never figured out how to pronounce that name, but one thing is for sure – they make the best burritos and Margaritas we’ve ever had. And trust us, we’ve had a lot.

8. Put your life at risk for a photo. Of all the formerly beautiful, now crumbling buildings The D has to offer, the most impressive and terrifying is Michigan Central Station. Designed by the folks who brought you Grand Central Station, in its day this Beaux-Arts masterpiece was the talk of town. Now it’s the shame of the town. How dumb Americans allowed this to happen… It hasn’t been used in over twenty year and is destined for demolition. Surrounded by massive fences and barbed wire it certainly casts an imposing figure. You’re definitely not supposed to go inside – they make that very clear. But that’s not to say that you shouldn’t try…

9. Come for the jukebox, stay for the jukebox. The only game of ‘If you HAD to, who would it be?’ that’s ended in a complete stalemate, took place in this charming bar. The décor features some great local art, there are two massive jukeboxes and they offer all you can drink Bloody Marys every Sunday. The locals described Bronx Bar to us as a ‘Hipster’ bar; we’d like to remind them that word ‘hip’ is in ‘Hipster.’

10. The Heidelberg Project. At this point in writing our top ten list, we are very hungry. For this tip, we would like to use the famous, and completely appropriate cop-out expression ‘It speaks for itself.’